GENOA, Italy (AP) – A spectacular planned explosion on Friday knocked down the remaining spans and supporting pillars of the Italian bridge that collapsed last year with the loss of 43 lives.

The blast in Genoa at 9:37 a.m. triggered a huge cloud of grayish dust as the pillars and roadbed leaned inward, then crumbled like a sandcastle.

Demolition experts have blown up the remains of Italy's Morandi bridge, nearly a year after the structure collapsed, killing 43 people pic.twitter.com/qjUWqTJook

In a few seconds, the Morandi Bridge was history, with debris falling into the riverbed under what had been a key link between the high-speed highway leading to the French Riviera and another highway linking Genoa, a major port city, to Milan. 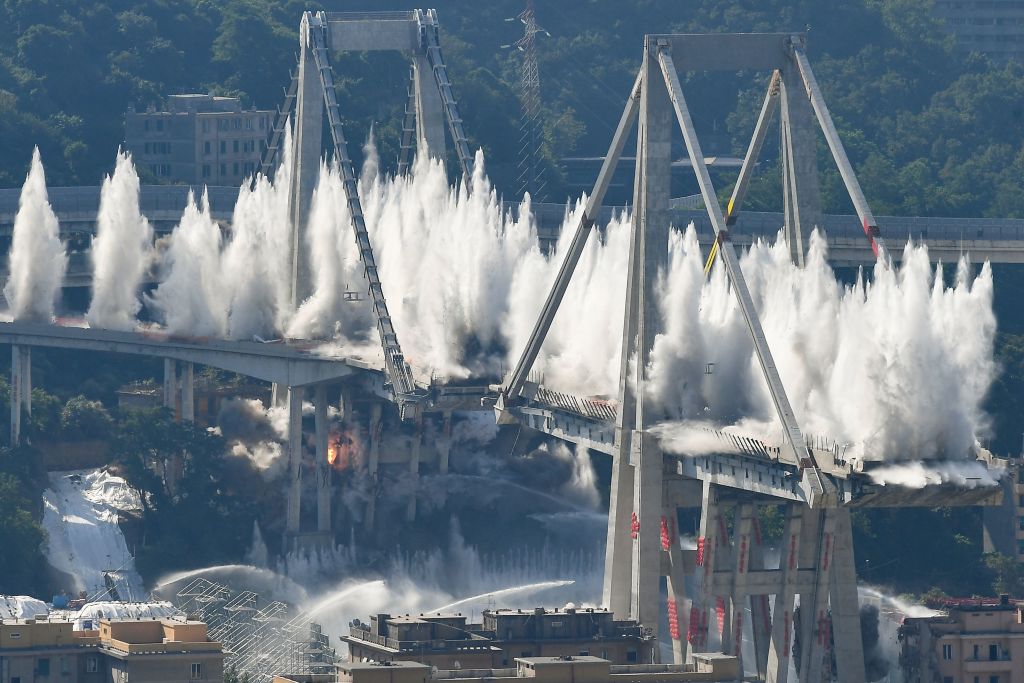 TOPSHOT – Explosive charges blow up the eastern pylons of Genoa’s Morandi motorway bridge on June 28, 2019 in Genoa. – Some of the remains of Genoa’s Morandi motorway bridge are set to be destroyed on June 28 almost eleven months after its partial collapse during a storm killed 43 people and injured dozens. (Photo by Vincenzo PINTO / AFP / Getty Images)

Minutes before the blast, sirens sounded a final warning. Some 3,500 people who live nearby had been evacuated as a precaution on Thursday and before dawn Friday. Before leaving, many had covered windows and doors with plastic sheeting in a bid to prevent dust from infiltrating their homes.

Other homes, directly beneath one of the bridge’s spans, had been evacuated immediately after the Aug. 14, 2018, collapse. Those apartment buildings will be eliminated as part of the replacement bridge’s construction.

Ahead of the planned blast, fire hoses sprayed water to reduce dust triggered by the blast. Still, the cloud of dust and debris seemed to darken the sunny sky. Frightened dogs barked at the noise. 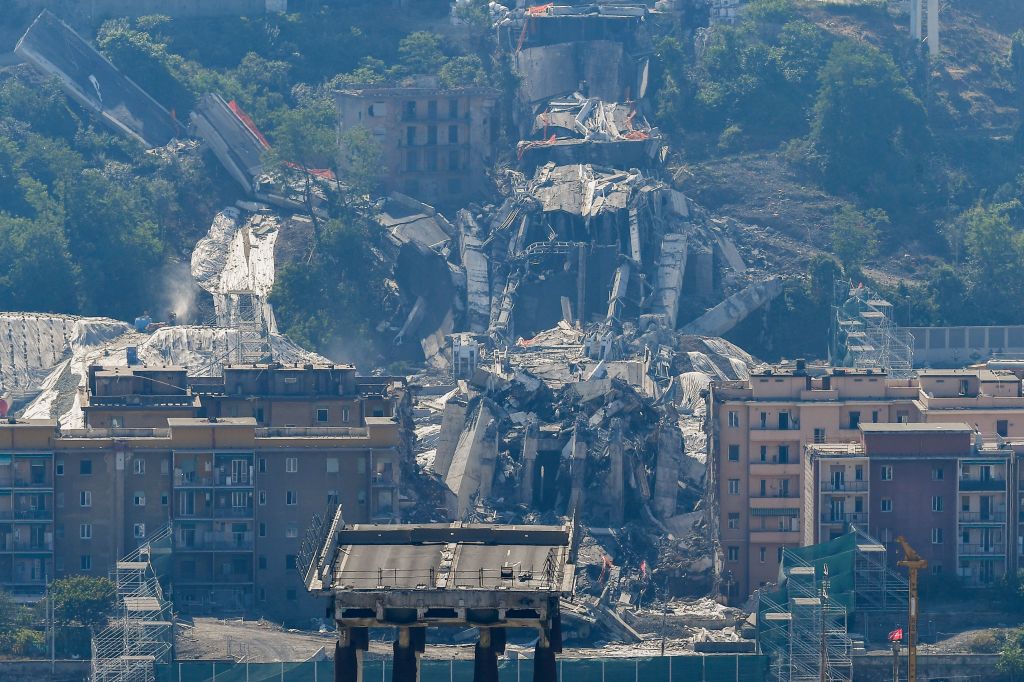 TOPSHOT – The bridge’s deck lies in debris and rubble among evacuated buildings after explosive charges blew up the eastern pylons of Genoa’s Morandi motorway bridge on June 28, 2019 in Genoa. – Some of the remains of Genoa’s Morandi motorway bridge are set to be destroyed on June 28 almost eleven months after its partial collapse during a storm killed 43 people and injured dozens. (Photo by Vincenzo PINTO / AFP) (Photo credit should read VINCENZO PINTO/AFP/Getty Images)

Prosecutors are considering possible design flaws or poor maintenance as they search for the cause of the deadly collapse during heavy vacation holiday traffic.

World-famed architect Renzo Piano, a Genoa native, has designed a replacement bridge, that will feature 43 lamps dotting the span in tribute to those who lost their lives when a stretch of roadbed gave way, plunging into the dry riverbed below, during a fierce thunderstorm. Traffic on the bridge was very heavy that day, the eve of Italy’s chief summer holiday, Ferragosto.

Genoa Mayor Mario Bucci said engineers will check to see if the nearby apartment buildings are still sound after Friday’s explosion. If they give the all-clear, residents will be allowed to return to their homes.