A statue of the world-famous and broadly admired founder of the Scouting movement was due to be removed on Thursday, but the plans were postponed, and now the figure will receive 24-hour security.

While work crews had been booked to remove the statue, the contractors refused to perform the work, Poole’s local newspaper the Bournemouth Echo reported. They are said to have told the council they would not proceed while people surrounded the statue.

The strength of feeling in favour of the statue was underlined when locals turned out to defend the public work of art, with anti-vandalisation demonstrators holding signs reading “British History Matters”, and a pair of Scout leaders arriving in full uniform to salute Baden-Powell. A petition to save the statue has reached nearly 17,000 signatures in a few hours. 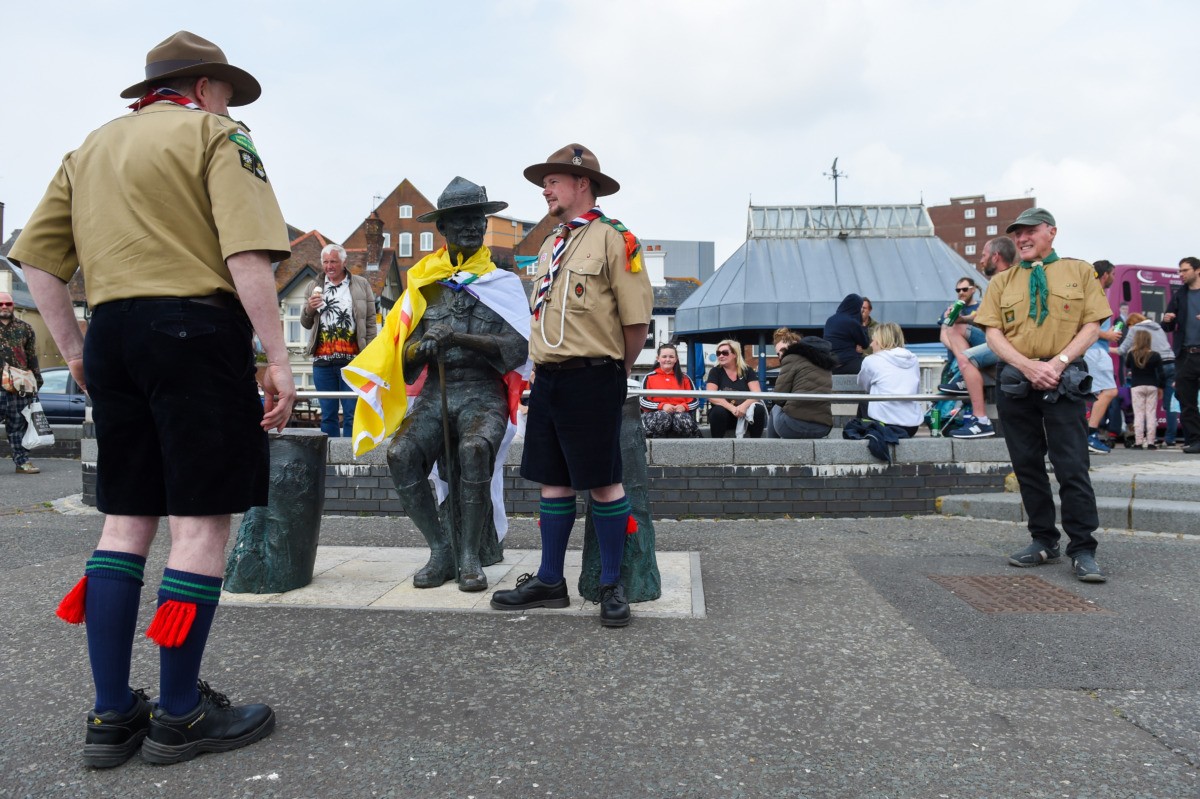 POOLE, ENGLAND – JUNE 11: Scouts show their support at the Lord Baden-Powell statue on June 11, 2020, in Poole, United Kingdom. The statue of Robert Baden-Powell on Poole Quay is to be placed in “safe storage” following concerns about his racial views and “Nazi sympathies”. (Photo by Finnbarr Webster/Getty Images)

The local authority insisted it wanted to remove the statue for its own protection after it was named by left-wing extremists as a target for removal, and intended to put it back once the “threat” had passed. While the statue is not now being removed today, the council still intends to place it into storage at some point in the future. A statement released by a town councillor said of the move:

Our decision yesterday evening to temporarily remove the statue of Lord Baden-Powell from Poole Quay was taken following the listing of the statue on a website detailing potential targets for protesters. This listing placed the much-loved statue at risk of damage or even destruction. We made the decision quickly in order to protect it.

We know that local people feel proud of Lord Baden-Powell’s and the Scout movement’s links with Poole, and that some people feel that we would be giving in to the protesters by temporarily removing the statue. However, we feel it is responsible to protect it for future generations to enjoy and respect.

We will not be removing the statue today as the foundations are deeper than originally envisaged and we need further discussions with contractors on the best way to remove it safely. Although we cannot say when any temporary removal may take place, we will be providing 24-hour security until it is either removed or the threat diminishes.

Should the statue be removed temporarily, barring unforeseen circumstances, we will return it to the Quay as soon as the threat level subsides.

The news that the comparatively recently installed bronze statue of the world’s first Chief Scout, British war hero, and youth organiser Lord Robert Baden-Powell would be removed from the seafront at Poole quay came on Wednesday evening, amid a flurry of other demolitions and vandalisation across the United Kingdom.

While the campaign against statues started against known slave owners, like that of Bristol’s Edward Colston, which was thrown into the harbour on Sunday, the hard left quickly developed a shopping list of monuments across the United Kingdom they condemned for a diverse variety of reasons. 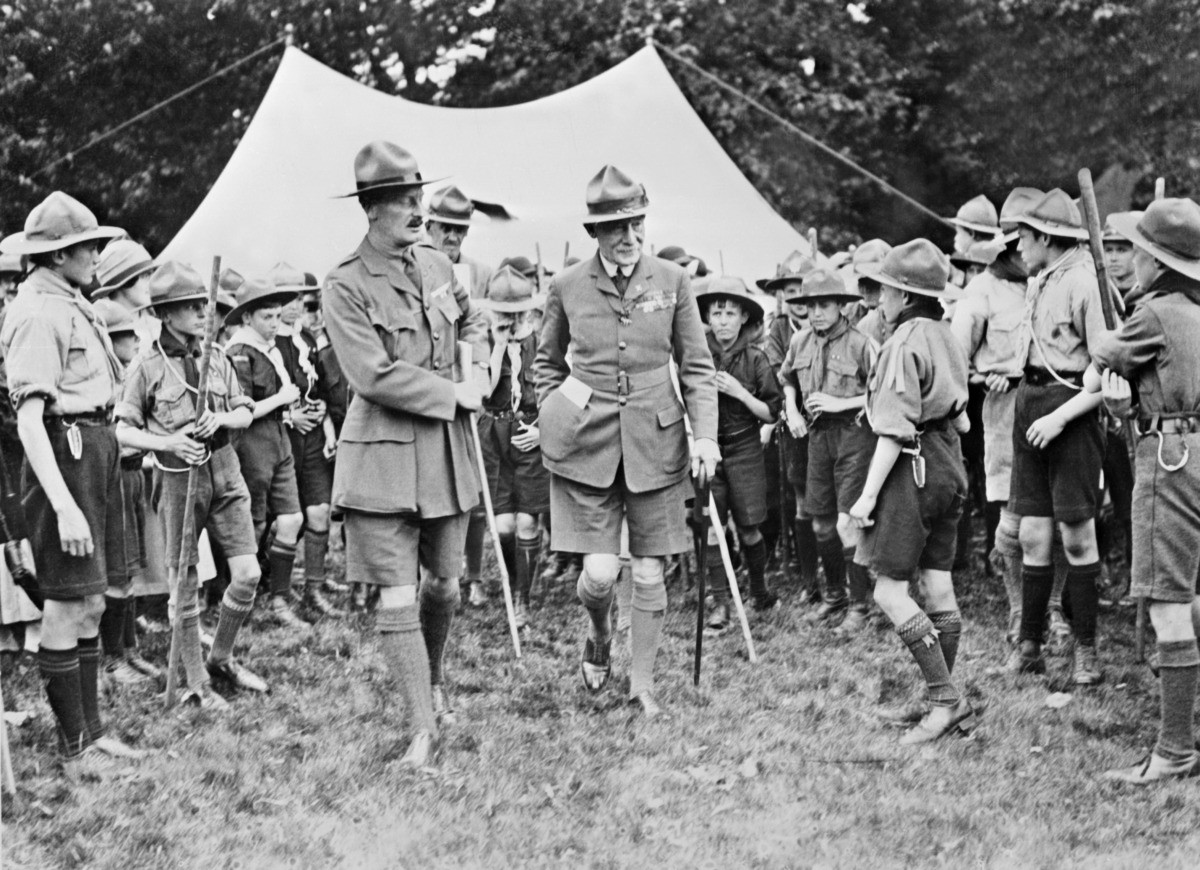 An undated picture of British General Lord Baden-Powell (C-R) surrounded by the members of the Boy Scout movement somewhere in Hertfordshire during holidays. Robert Stephenson Smyth Baden-Powell (1857-1941) served in India, Afghanistan, West Africa and Matabeleland. He won fame during the Boer War as the defender of Mafeking (1899-1900). In 1908 he founded the Boy Scout movement, and in 1910, with his sister Agnes, the Girl Guides. (Photo by -/CENTRAL PRESS/AFP via Getty Images)

After a London local council removed a statue of a slave owner in response to threats it would be the site of daily protests until it fell, other councils moved to tear up memorials proactively. One was Bournemouth Council, which moved fast after accusations were made about the political views of Baden-Powell, who died in 1941.

The Echo reported that one of the leading voices against the continuing presence of the statue, which looks out across the sea to Brownsea Island where the first-ever Scout Camp took place, is former Labour candidate Corrie Drew who accused him of being a supporter of Hitler, as well as being a “homophobe” and “racist”.

But revelations about Drew — as an acolyte of former Labour leader Jeremy Corbyn with a questionable track record on antisemitism — and her more recent communications have called into question the nature of the sudden attack against Baden-Powell. On Wednesday, Drew wrote a foul-mouthed message on social media, when she told followers: “I’d like to state, in the strongest terms possible: If you’re white, I don’t give a sh*t about your issues with the BlackLivesMatter protest or movement.”

As to the specific accusations against Baden-Powell, a BBC profile published on Thursday cited historians and academics questioning the negative account of the Scouting founder’s life, including when — as an elderly man near the end of his life, apparently “duped” by diplomats from Germany seeking a way to spy on England through youth movements — he met with senior Nazi leaders.

Toppled Colston Statue Lifted from Harbour, Will Be Sent to Museum https://t.co/IFBcGOHXCX

The BBC reported the comments of historian Tim Jeal who said while Baden-Powell admired the Germans for encouraging young people to live an outdoor life, he ultimately “condemned Hitler for being a megalomaniac and for mounting what he called ‘huge pageants for hypnotising his people'”.

Further casting doubt on the claims, the article cited academic Dr Andrew Norman who noted that should the Nazis have been able to invade England in the 1940s, Baden-Powell was on the list of senior British figures they intended to execute, as a potential threat to the occupation. Baden-Powell had, after all, partly set up the Scouting movement to help young Britons to grow up capable of defending their homeland from external threats if required.

Of his record during the Boer War, during which Baden-Powell became a widely recognised and lauded British hero, Jeal told the BBC: “The worst that is normally said about him is that he starved 2,000 black Africans in Mafeking and stole their food to feed the white population.

“This is an absolute lie. He opened soup kitchens and shot all of his cavalry horses so that he could feed them.”

It is worth noting the Scout leaders that turned out to defend the statue of the movement’s founder Thursday were not, in fact, representatives of the main national UK Scouting association, but were members of the Baden-Powell Scouts Association. The BP-Scouts, who operate under the banner of ‘Traditional Scouting’, split off over the forced modernisation of scouting in the 1960s and 70s, when the Scout’s oath was changed and Baden-Powell’s original training programme was discarded.

The Baden-Powell Scouts still wear the traditional uniforms and say the original Scouting oath of the movement, which have been otherwise abandoned in the United Kingdom. 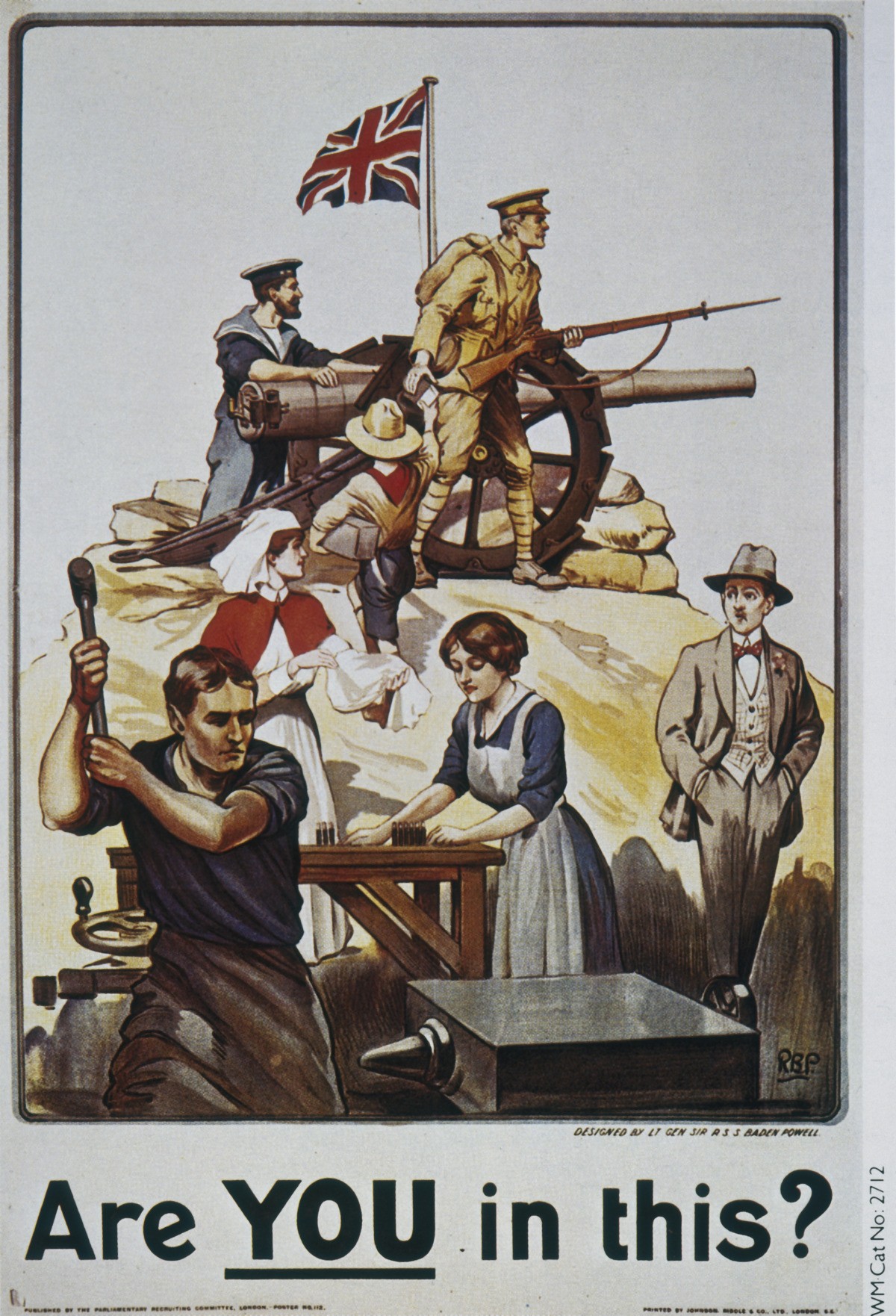 A famous Great-War poster issued by the British government to promote the war effort, which was painted by Lord Robert Baden-Powell who, as well as being a lieutenant-general of the British Army, the founder of the Scouting movement, and an author, was also a painter (Photo by Fotosearch/Getty Images).