The statue of scouts founder Robert Baden-Powell, who led an expedition to end the enslavement of Africans by the Ashanti king, has been released from its protective casing, a month after Marxist Black Lives Matter activists threatened to tear it down over claims he was a racist and supported the Nazis.

The local council had initially planned to remove the Poole quayside statue in early June after it appeared on a hitlist of memorials across the country to be targetted because they allegedly glorified the Empire or racism.

In the case of Baden-Powell, he was accused of being a homophobe, racist, and “an enthusiastic supporter of Hitler”.

The local authority decided to remove the statue of Baden-Powel, supposedly temporarily, days after far-leftists toppled a statue in Bristol of seventeenth-century philanthropist, merchant, and parliamentarian Edward Colston due to his ties to the slave trade.

Reacting to the news that the statue of the beloved scout founder was to be taken away, locals and traditional scouting enthusiasts set up a human ring around the memorial to prevent its removal, vowing to protect it from vandals with overnight vigils by former scouts and military veterans.

Bournemouth, Christchurch, and Poole Council finally backtracked on the removal, and in the second week of June announced that the statue would receive 24-hour security. 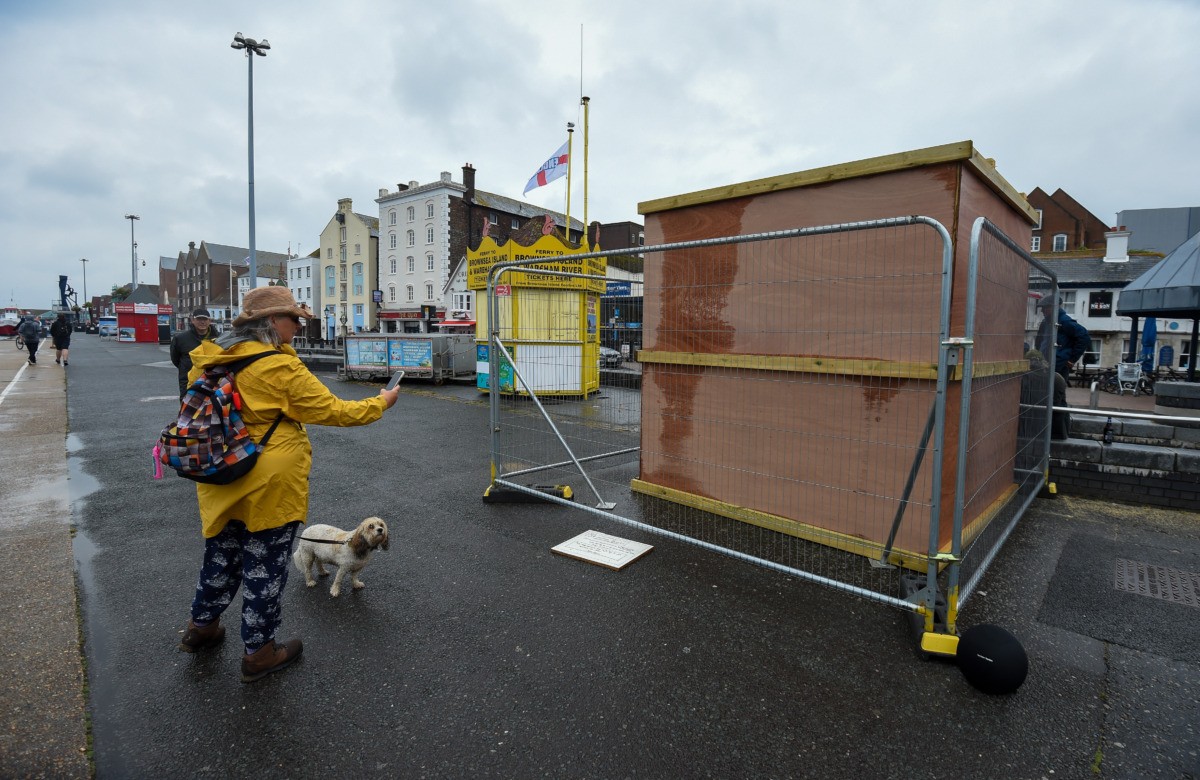 POOLE, ENGLAND – JUNE 12: A general view of the fenced off and boarded up Lord Baden-Powell statue on June 12, 2020 in Poole, United Kingdom. The statue of Robert Baden-Powell on Poole Quay is to be placed in “safe storage” following concerns about his racial views and “Nazi sympathies”. (Photo by Finnbarr Webster/Getty Images)

The statue was then boarded up, allegedly for its security — a fate shared by the statue of allegedly “racist” Winston Churchill, who was eventually liberated from his dystopian cultural coffin.

With the threat of damage one month later now considered “minimal”, the local council announced on Wednesday that the hoarding would be removed.

However, BCP Council said that while it will remain in situ, it implied there might be alterations made to its display. It said it was “actively working with the Scout Association to consider how best to reflect the wider aspects of the life of Lord Baden-Powell”.

The Scouts, sadly, were not robust in its defence of its founder, with the World Organisation of the Scout Movement saying simply on June 12th that Baden-Powell “lived in a different era and within different realities”, failing to challenge the allegations of racism or Nazism against him.

Even the famous Christian adventurer and British chief scout Bear Grylls said last month that the scouts “most certainly do not celebrate Baden-Powell for his failings”. Grylls then insinuated that Baden-Powell is merely a lesson of the scouts’ history to learn from, distancing the man from the movement by saying the scouts’ “journey continues today without him”. 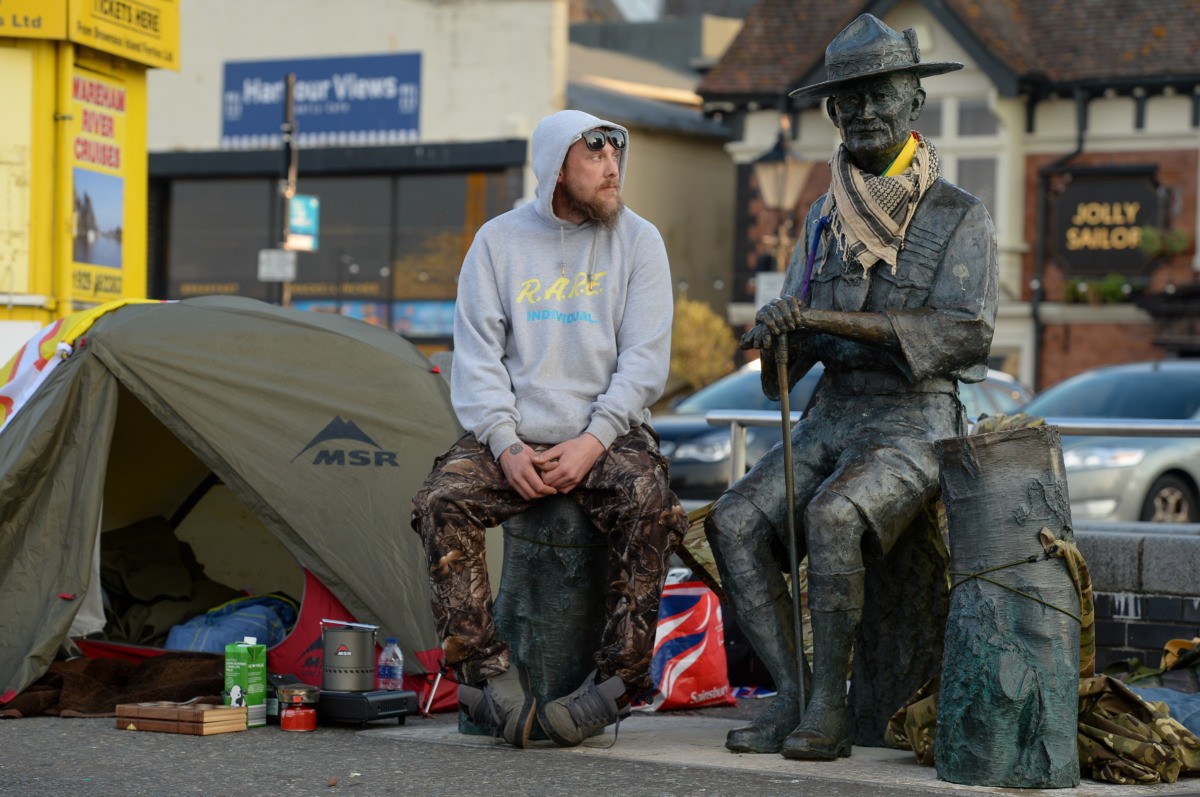 POOLE, ENGLAND – JUNE 12: Former Scout Dan Davies at his tent, set up to protect the Lord Baden-Powell statue on June 12, 2020 in Poole, United Kingdom. The statue of Robert Baden-Powell on Poole Quay is to be placed into safe storage after campaigners have accused him of racism, homophobia and support for Adolf Hitler. (Photo by Finnbarr Webster/Getty Images)

The denouncement and distancing were repeated throughout the establishment, with little challenge against the allegations. While every human being’s history is chequered and complex, the assertions that Lord Baden-Powell was racist towards Africans and was a supporter of the Nazis has been disproven by historians as untrue, with at least one the charges against him branded an “absolute lie”.

In a report surprisingly coming from the left-liberal-leaning BBC, for example, Lord Baden-Powell’s biographer Tim Jeal told the British broadcaster that the elderly scout leader, while admiring the German culture of outdoor life, “condemned Hitler for being a megalomaniac” and twice wanted to marry Jewish women.

He had met with Nazi officials in 1937 in the hope of fostering friendship between the two countries.

“His efforts were in vain, and for his pains he was put on a Nazi death list because the Germans suspected he was using scouts as spies,” historian Dr Andrew Norman told the BBC.

On his record on the Boer War, Baden-Powell biographer Jeal said: “The worst that is normally said about him is that he starved 2,000 black Africans in Mafeking and stole their food to feed the white population.

“This is an absolute lie. He opened soup kitchens and shot all of his cavalry horses so that he could feed them.” 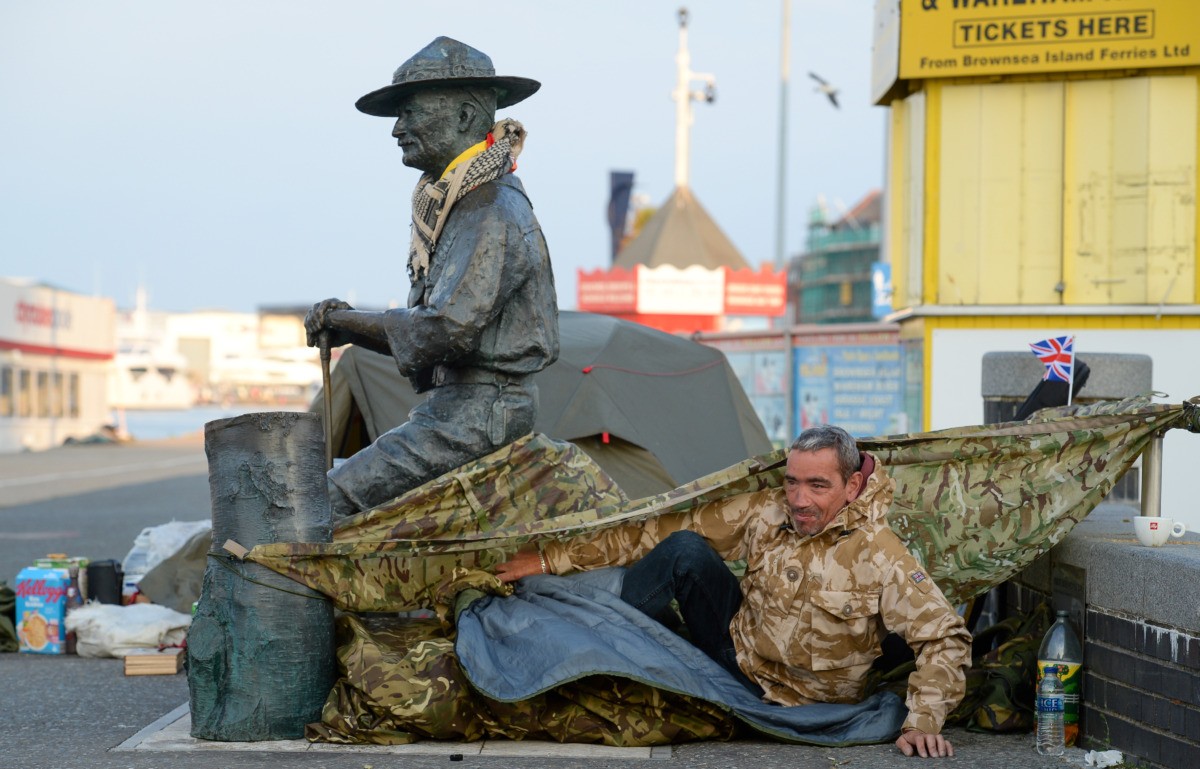 POOLE, ENGLAND – JUNE 12: Former soldier Stephen McCartan wakes up at his shelter set up to protect the Lord Baden-Powell statue on June 12, 2020 in Poole, United Kingdom. The statue of Robert Baden-Powell on Poole Quay is to be placed into safe storage after campaigners have accused him of racism, homophobia and support for Adolf Hitler. (Photo by Finnbarr Webster/Getty Images)

One of Baden-Powell’s most extraordinary acts was his involvement in an expedition to stop the Ashanti kingdom from trading in African slaves.

In The Downfall of Prempeh (the Ashanti ruler), Baden-Powell wrote in the 1896 diary that the primary reasons for the expedition were:

To put an end to human sacrifice.

To put a stop to slave trading and raiding.

To ensure peace and security for the neighbouring tribes.

“[I]n no part of the world does slavery appear to be more detestable than in Ashanti,” Baden-Powell wrote.

“They are not required for currency, since gold-dust is the medium here. Nor are they required to any considerable extent as labourers,  since the Ashanti lives merely on vegetables, which in this country want little or no cultivation. And yet there is a strong demand for slaves. They are wanted for human sacrifice,” he explained.

Queen Victoria’s son-in-law, Prince Henry, died on the expedition against the Ashanti, in which Baden-Powell let a contingent of African natives.

However, all this context into the life and achievements of scouting’s founding father were not mentioned by the mainstream media, including the left-progressive Sky News and notionally right-wing Sun newspaper, when reports of the statue’s uncovering were made.

The BBC, for its part, reported that the allegations were refuted by Baden-Powell’s biographer, linking back to its original piece.

When the statue was first under threat of being removed, one former Queen’s Scout, 79-year-old Len Bannister, told reporters: “If they want to knock this down, they’ll have to knock me down first.

“It’s absolutely crazy. Who’s it that actually wants to do it? 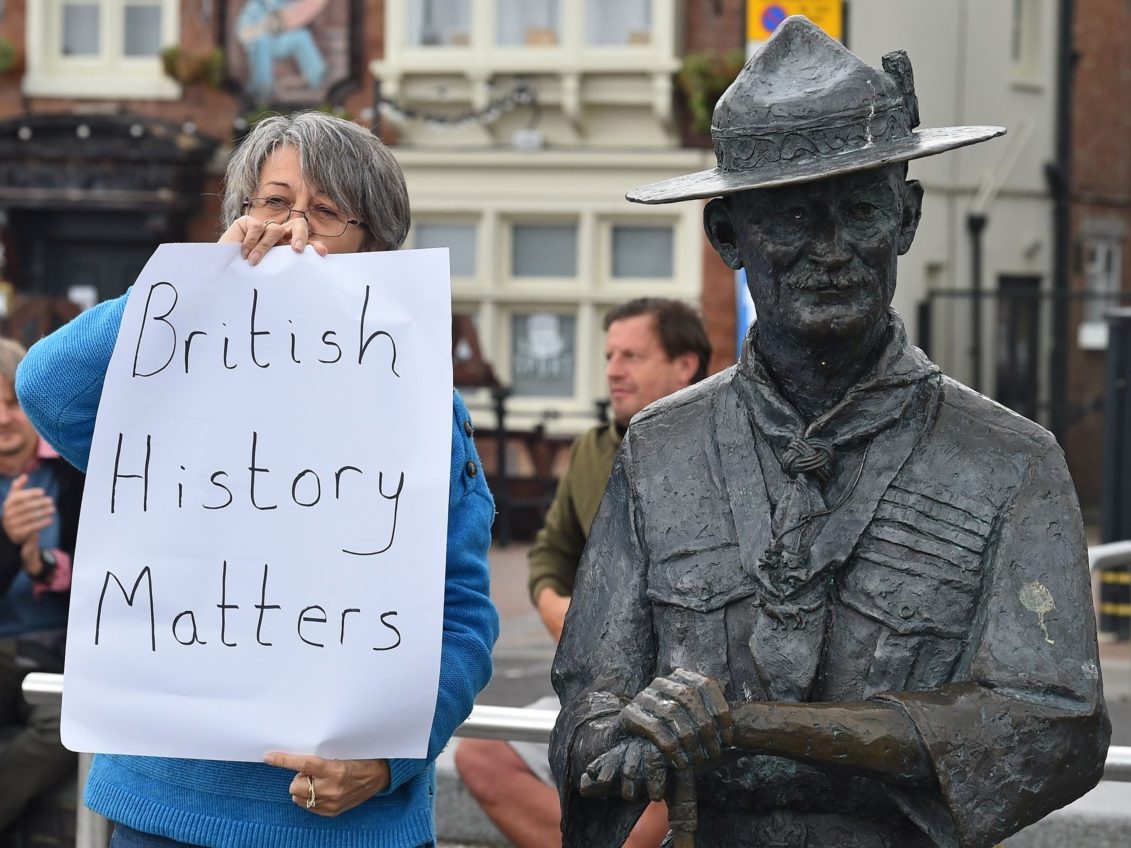