Around 480 migrants aided by pro-migrant activists occupied Paris’s Place de la République for several hours, setting up tents as part of a “night of solidarity”.

The occupation of the famous square took place on Thursday at around 6:30 pm and saw the migrants set up tents alongside pro-migrant activist groups such as Utopia 56, which has previously carried out similar occupations.

Utopia 56 released a statement, saying the protest was to demand accommodation for the homeless across France, claiming that the French government has identified three million unoccupied homes. 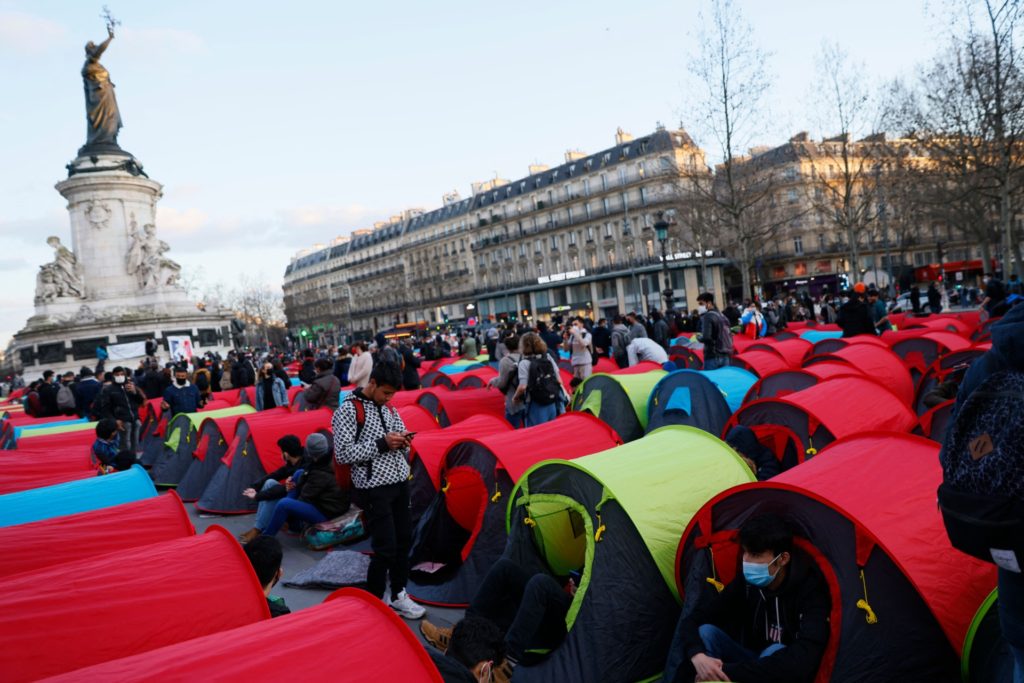 People sit in one of 300 tents are set-up in La Place de la Republique for the start of a night of Solidarity organised by Collectif Requisitions to highlight the plight of the homeless in central Paris on March 25, 2021. (Photo: THOMAS SAMSON/AFP via Getty Images)

Yann Manzi, the founder of Utopia 56, spoke to the news website InfoMigrants, saying: “Our job is also to help make these people and their situation visible.”

He added: “We don’t want any more camps. We want housing. The government seems to be unaware that it is leaving the most vulnerable among us sleeping outside, in the middle of a pandemic.”

According to InfoMigrants, 20 families were present at the protest, along with migrants, mainly from Afghanistan and sub-Saharan Africa, who live under bridges in northern Paris.

At around midnight, the associations negotiated with the local Paris government to shelter the migrants, who were later taken away in buses to hotels or gymnasiums.

The occupation comes several months after Utopia 56 organised a similar protest outside of Paris city hall, with 218 migrants, coming from Somalia, Afghanistan, and the Ivory Coast, taking part.

Unlike the latest protest, the September occupation was evacuated by the Paris police, with Interior Minister Gérald Darmanin praising the actions of the officers.

“Support for the action of the [police prefecture] which carried out the evacuation of an illegal camp set up in front of the Hôtel de Ville in Paris. Shelter solutions have been proposed. We will not tolerate any irregular occupation of public space,” Darmanin had said.

Makeshift migrant camps remain a problem in parts of northern Paris, with a camp in Porte d’Aubervilliers having been evacuated for the 60th time in January 2020.