Sasha Johnson, a self-described ‘Black Panther’, said that “house negroes” are in need of “hanging” following a Downing Street report which said that the United Kingdom is a model for race relations.

Johnson, a leading figure in the broader BLM movement in Britain — although not the Black Lives Matter UK organisation, seemingly — took to Instagram on Wednesday morning to criticise Tony Sewell, the British government’s head of the Commission on Race and Ethnic Disparities.

Dr Sewell, who is of Jamaican heritage, said that the 264-page Downing Street report demonstrated that the United Kingdom has become a “successful multi-ethnic and multicultural community” and a “beacon to the rest of Europe and the world”. The report went on to conclude that there is no “institutional racism” in Britain.

Sharing a Guardian article on the report featuring a picture of Mr Sewell, Sasha Johnson wrote: “These are the kinds of house negros they send to take down the movement.”

“I won’t stop calling them out they have no place in our community yet alone [sic] speaking on behalf of us!” she added.

“Say what u want about me don’t care fact is fact go and read the article hes [sic] uncle tom,” Johnson continued.

Responding to a commenter who replied to her post with “We have them in America as well”, Johnson said: “They need hanging”. 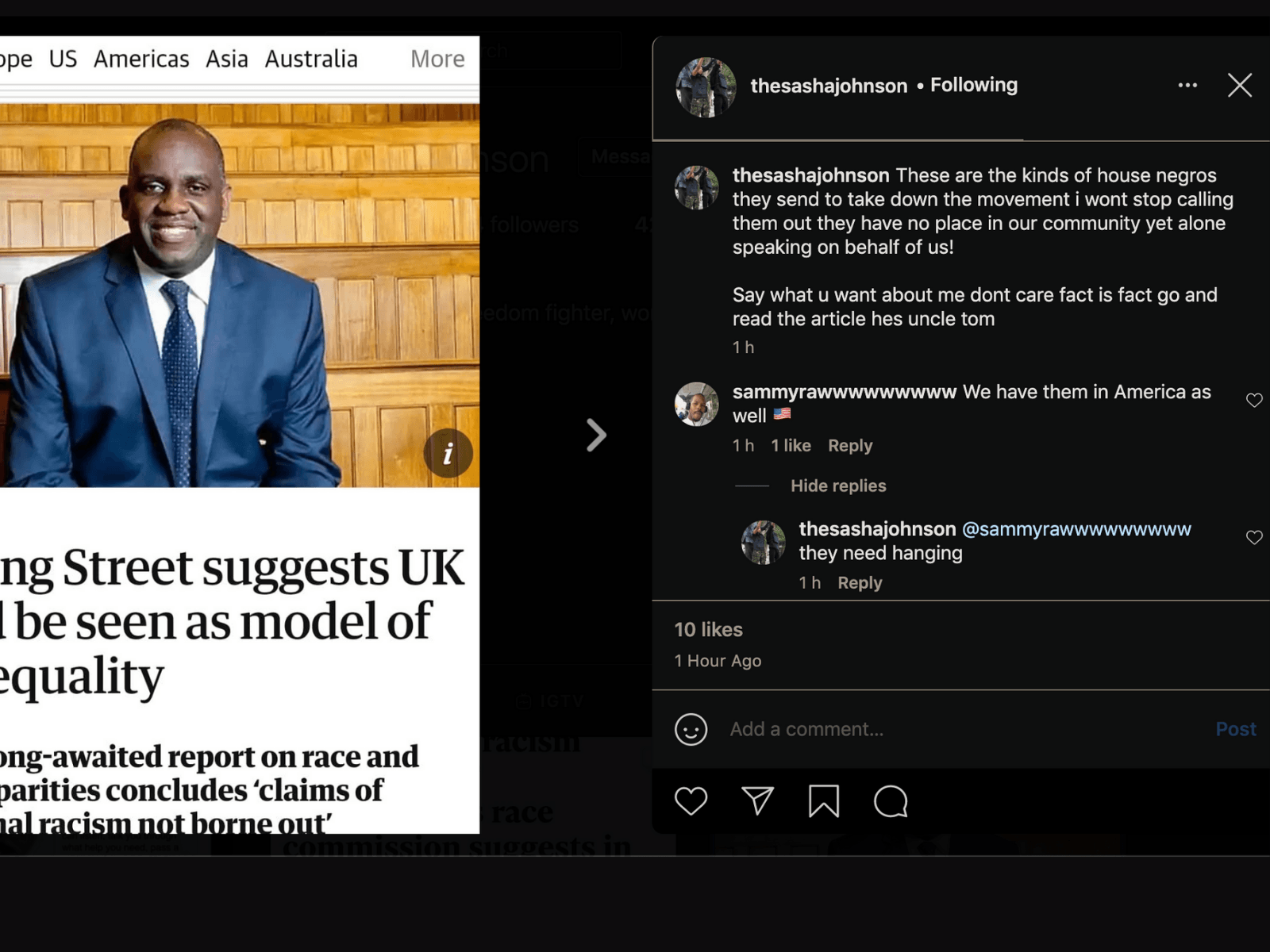 Commenting on Johnson’s social media outburst, political commentator Calvin Robinson told Breitbart London: “This just goes to show, Sasha and her movement is not only toxic and divisive but thrives on hostility.”

“Dr Sewell’s report is significant — the evidence shows there’s no systemic racism in the UK, something many of us have been stating for a while. There are, of course, still elements of racism and racial disparities we need to work on, but we will only do that by working together.”

Robinson, who has himself been a target of left-wing racism for espousing his conservative political beliefs, added: “We must find strength in unity, and ignore the race-hustlers and race-baiters who benefit from our division, which seems to be their only objective.”

"Apparently, black people must all think the same way. If we go off-script, we’re race-traitors, ‘Bounties’, and ‘coons’. It seems BLM don’t support racial equality after all," said @calvinrobinsonhttps://t.co/CRSvrvWwHm

Sasha Johnson first rose to prominence last summer after a Breitbart London viral video showed the radical activist declaring that British police are “no different than the KKK” and that the formation of a “Black Militia” was necessary to combat racism in Britain.

Commenting on the video, Douglas Murray, the author of The Madness of Crowds and The Strange Death of Europe, said last July: “There is no reason that in the world’s most tolerant and racially tolerant and mixed country, like the UK, that we should just sit by as demagogues and racists try to portray our country as some extraordinarily racist, KKK-ridden hellhole. It’s not right, it’s totally defamatory to our country, it’s unfair, and it’s wrong.”

Johnson has since joined the executive leadership committee of the Taking The Initiative Party (TTIP), which she initially claimed was “the first black-led political party in the UK” — though she later clarified that the party was merely “black founded”.

She is now promoting the New Black Panther Party UK on social media, although TTIP still lists her as a member of its executive leadership committee.

Johnson is not, as mentioned previously, known to be officially affiliated with the Black Lives Matter UK organisation, but has frequently appeared at BLM rallies in London and helped organise the independent Black Lives Matter Oxford group.

As part of her political platform, the leftist activist has called for the creation of a “race offenders’ register” which would prevent people from being hired if they were found to have committed “microaggressions”.

Johnson has also called for “Holocaust-style” reparations for black people in Britain.

WATCH: BLM Activist Calls for Revolution in the UK, Saying: ‘The Police Is No Different from the KKK’ https://t.co/20iuJbgTQ4 pic.twitter.com/ZR4R1fEU6z