Italy beat England in an important football match on Sunday and at least there’s some good to come of it: no nauseating social media posts from Piers Morgan looking smug; no grandstanding from Prime Minister Boris Johnson; no knighthoods for grisly, brainless millionaire yobs whoare good at kicking balls around; but best of all, a really satisfying penalty miss from BLM-supporting wokista Marcus Rashford.

Rashford, in case you’re unaware, is one of those sportsmen better known for their political activism than for their prowess on the supporting field. He has taken the knee and raised the fist for Black Lives Matter, whose UK branch features him prominently on its website.

But is Rashford any good at his day job? Not on last night’s showing, no.

The game ended up as a 1 – 1 draw so had to be decided by a penalty shootout.

Rashford had only one job. Kick a ball past another man and into a net. He gets paid £10 million a year for this so he should be good at it. And it’s not like he had the excuse of being tired or exhausted. He hadn’t played at all during the main match. Along with another young player he was brought on as a substitute, right at the end, supposedly because he was good at penalties.

But he fluffed it. So did two other relatively young and inexperienced players Jadon Sancho and Bukayo Saka, who is just 19 years old.

England’s supporters were understandably unhappy about this. They had been led to believe by the media that the England football team was on the verge of its most significant victory since it beat Germany to win the World Cup in 1966. Instead, here was England doing what it pretty much always does in international football fixtures: playing stolidly; choking in the penalty round.

It seems that players like Rashford can be jolly big and clever with their race politics and virtue-signalling. But when it comes to representing their country in the most important game of their career they lack the fibre, skill, and fortitude to deliver. They are Generation Crap.

Apparently, though, you are not allowed to say this. Consider for example, this tweet from the impeccably woke Brian Moore. Moore, I gather, is a former rugby player who for some bizarre reason thinks it’s edgy and cool to choose the Number of the Beast as part of his Twitter handle. 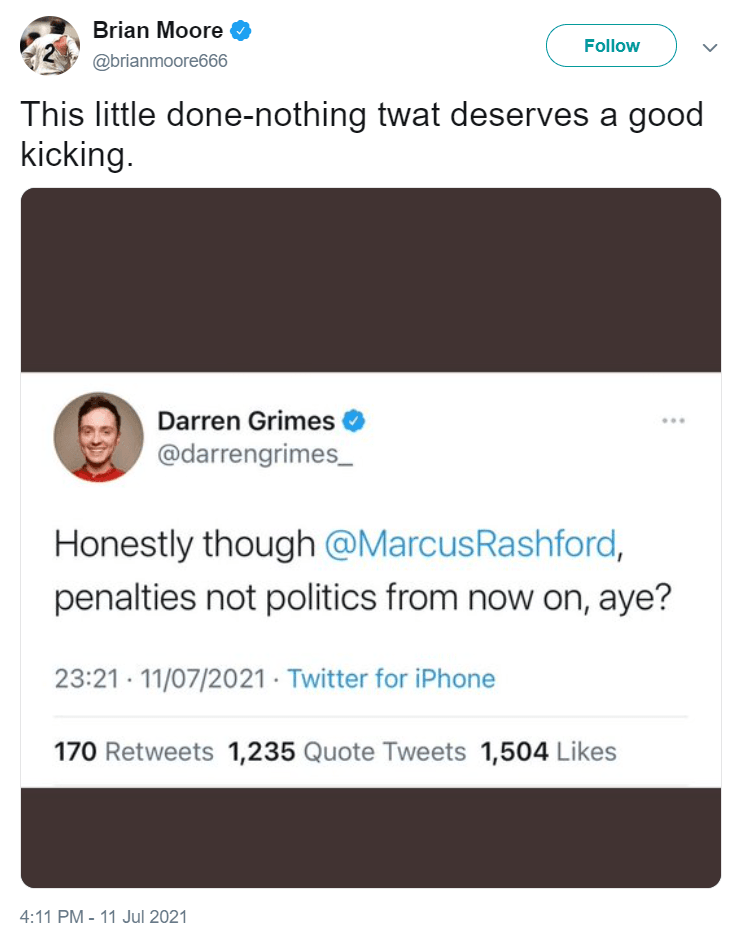 Political commentator Darren Grimes, it seems to me, has made a reasonable and unexceptionable point. Marcus Rashford is 23 years old. The only reason anyone pays any attention to his adolescent, half-baked, wearisomely predictable, race-baiting political views is that supposedly he is a credit to the England football team. But if he can’t even be a credit to the England football team, through the medium of scoring brilliant goals, then what exactly is the point of him?

Yet for asking this perfectly sensible question, Grimes apparently ‘deserves a good kicking.’ If anyone on the right called for violence against someone on Twitter, it would result in instant suspension. When you’re a woke activist like Brian Moore, though, you seem to get a free pass.

The bigger problem, as Grimes has correctly identified, is this: so much sport these days seems more interested in pushing a political narrative than it is in providing entertainment. Maybe it was ever thus. Juvenal did, after all, coin the phrase ‘Bread and Circuses’ 2000 years ago. But things seem to have got worse, much worse, in the last few years.

The main narrative in football is now this: everything, absolutely everything, is about racism.

Note how, today, the football establishment (from the England Twitter account to the loser manager Gareth Southgate) is busy trying to distract from its failure by having a go at fans for their apparently racist criticisms of the three England players who missed their penalties. (By unfortunate coincidence, all three of them belong to ethnic minorities).

We’re disgusted that some of our squad – who have given everything for the shirt this summer – have been subjected to discriminatory abuse online after tonight’s game.

We stand with our players ❤️ https://t.co/1Ce48XRHEl

I’d take these claims with a huge pinch of salt. Sadly there will be bad apples on the fringes, but the idea that English football, or England generally, is being riven by an unprecedented outbreak of racism is just race-baiting poppycock.

I don’t think England fans are criticising Rashford, Sancho and Saka because they are black. They are criticising them because they did not rise to the occasion. Just like England manager Gareth Southgate failed to rise to the occasion in the 1996 Euros, when he missed the penalty against Germany and caused England to crash out of the semi-finals. No more is Southgate a white loser failure because of the colour of his skin than Rashford, Sancho and Saka are black loser failures because of theirs. They are simply loser failures.

It has been suggested that Southgate chose the three losing penalty takers for political reasons: that he liked the idea of the optics of three ‘diverse’ players scoring the winning goals. I’m no football expert but I must say his choice of teenager Saka, especially, does seem bizarre: what an extraordinary burden to place on a 19-year old, when there were so many more experienced players who might have been less likely to crack at the key moment.

Southgate, in common with almost every senior figure in every institution you could name these days from the church to the military to finance to sport, is achingly PC. Whether he did choose those three players for political reasons or not we can’t know, but one thing is for absolute certain: if England had won, then Southgate, the Football Association and the mainstream media would be milking the race angle for all it was worth. They would be celebrating England’s victory as a triumph of diversity.

Some people are understandably sad that England lost its best chance of major football victory since 1966. Perhaps we dodged a bullet.