(AFP) — When Eritrean teen Aman Mehari begins to feel the stress, he hits the basketball court in his new temporary home — a village school turned migrant facility in southern Lithuania.

The 16-year-old is one of thousands of people — almost all of them from the Middle East and Africa — who have crossed into the Baltic EU nation from Belarus in recent months.

“When you wake up in the morning you take your breakfast. After breakfast, you can’t do anything, so you just come here and play basketball,” Mehari told AFP.

He is still waiting to make his asylum application because the authorities in Lithuania — a country of 2.8 million people where migration is virtually unprecedented — are overwhelmed.

Living in limbo is “very stressful”, said Mehari, whose only hope is that his family can join him in Lithuania and “live a happy life”.

🚨A migration crisis is building up at the Belarus-Lithuania 🇱🇹 border.

📣Upon our request, Commissioner @YlvaJohansson will join @EP_Justice today to discuss the deteriorating situation at the EU’s 🇺 external border.

👇This is how #Lukashenko is running “#migration tourism” pic.twitter.com/sZ6dVNswNj

Illegal migration to Lithuania has skyrocketed, with the total number of detected newcomers reaching 4,000 so far this year, compared to just 81 for all of 2020.

According to officials, most of the migrants are from Iraq.

Lukashenko has denied the allegations, insisting instead that Lithuania triggered the migrant influx itself after Vilnius announced in July it would cut the asylum request process to 10 days.

Tensions between Minsk and Vilnius escalated after Lithuania sheltered several members of the Belarusian opposition, including Svetlana Tikhanovskaya, Lukashenko’s rival in the August 2020 presidential election.

The EU has imposed sanctions on Belarus over Lukashenko’s crackdown on the opposition and protesters in the wake of the disputed ballot.

Brussels has also sent dozens of border guards to help and pressed Iraq to help stem the flow of migrants to Belarus by limiting flights.

Border Guards of Belarus and Lithuania Face Off at EU Frontier over Migrants, Shots Fired https://t.co/w924lPeVsw

The sudden influx has caused unease.

There have been demonstrations against the migrants — and the migrants themselves have protested over conditions in the camps.

A flashpoint for protests has been the facility at Rudninkai, an interior ministry training centre where the migrants are camped out in army tents.

“How can we sleep in wet tents, how can we eat only one time in 24 hours? They treat us like animals here,” Amir Taher Mohammed, 29-year-old Iraqi, told AFP at the camp. 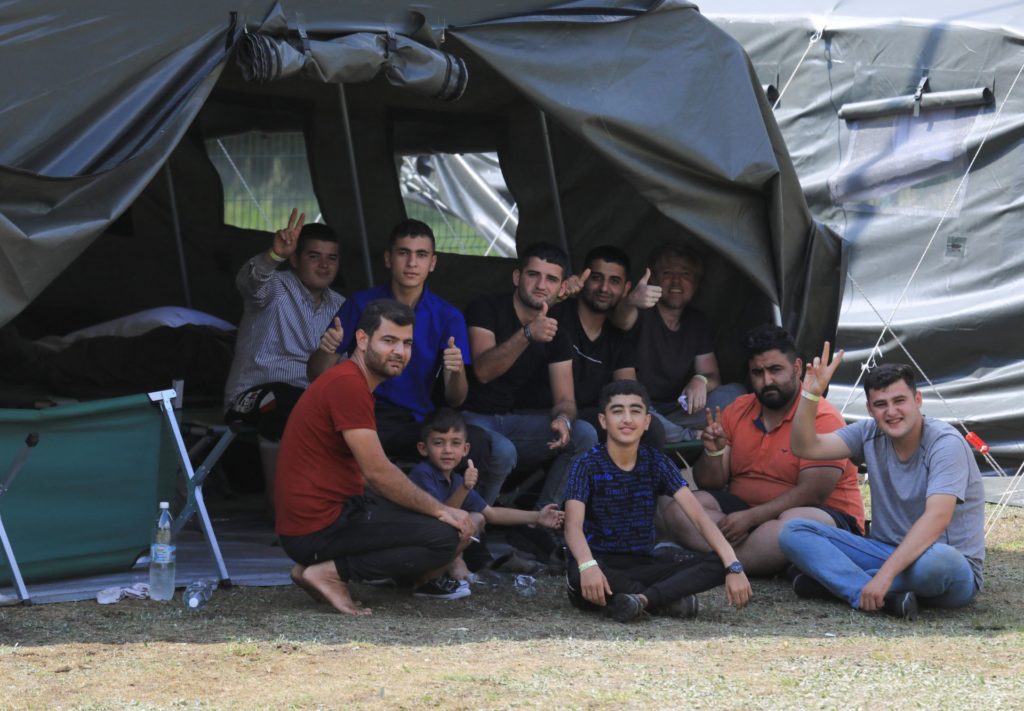 Migrants react to the camera as they sit by a tent in a camp near the border town of Kapciamiestis, Lithuania, on July 18, 2021. – Lithuania has seen more than 2,000 arrivals since the start of the year across the border from Belarus. Most of the migrants are from Iraq and Lithuanian officials suspect the influx is being orchestrated by the Russia-backed Belarusian regime as retaliation against EU sanctions. (Photo by PETRAS MALUKAS/AFP via Getty Images)

Fellow Iraqi Hussein Ali, 22, said: “We want freedom, we want good conditions. We want to be called refugees, not criminals”.

But locals are wary of the new arrivals.

“There are too many of them. I didn’t see them and don’t know anything about them, but I think this is not good,” said Zofija, an 88-year-old pensioner from a nearby village.

The government has toughened legislation to allow the detention of migrants and limit the right to appeal against rejected asylum requests.

This week, border guards began pushing migrants back to Belarus and diverting them to border checkpoints or diplomatic missions to ask for asylum.

The controversial strategy seems to be working. Only 56 of some 700 or so migrants intercepted by Lithuanian border guards from Tuesday to Friday were allowed to enter into the Baltic EU state.

But Belarusian border guards said Tuesday that some 40 migrants with “bodily injuries,” including women and children, had been turned back by Lithuania and accused the EU state of using “force”.

Lukashenko has said it will not allow the migrants back in and Minsk has ordered an investigation into the death of an Iraqi man who was allegedly found near Belarus’s border with Lithuania.

Britain's Home Office has been block-booking hotels along England's south coast to host migrant youths as the country's long-running Channel crisis continues to worsen, despite promises to end the practice https://t.co/AEsR3bACYj

But NGOs have been critical of the migrant pushback policy.

“This restricts the fundamental human right to seek asylum in a safe state,” Akvile Krisciunaite, a researcher at the Diversity Development Group, told AFP this week.

“Belarus is not a safe country, and human rights are known to be grossly violated there.”

Perez, a 30-year-old Cameroonian sitting on the steps next to the entrance of the Vydeniai school, said he empathised with Lithuanians.

“Things are not easy for us, but things are also not easy for them. What we hear from the news is that people are coming every day,” he said.

“So we are just here waiting”.