British lawmakers joined activists from Hong Kong, Tibet and Xinjiang in London to condemn the “Genocide Games” Olympics being held in Communist China.

Gathering in Picadilly Circus on the eve of the opening of the Beijing Olympics, Conservative MP Nusrat Ghani and Lord David Alton of the House of Lords vowed to hold Communist China account for its abysmal human rights record in Hong Kong and Tibet and for the “genocide” being committed against Uyghurs and other ethnic minorities in the Xinjiang region, alternatively referred to as East Turkestan.

Lord David Alton, who was personally sanctioned by the Chinese Communist Party (CCP) in retaliation for declaring a genocide against the Uyghurs, said that there will be “no light of the Olympic Flame” for the people persecuted by the regime in Beijing.

“Not since the 1936 games were held in Berlin, when the world saw Hitler use the Olympics to promote his hideous ideology, with most Jewish German athletes barred from taking part in the Olympic ideals, not since then have we seen the games so debased,” Lord Alton told the crowd.

“To those companies who have sponsored these Beijing Olympics, we should say ‘shame on you’,” the Vice-Chair of the All-Party Parliamentary Groups on Uyghurs, Hong Kong, and Tibet added. 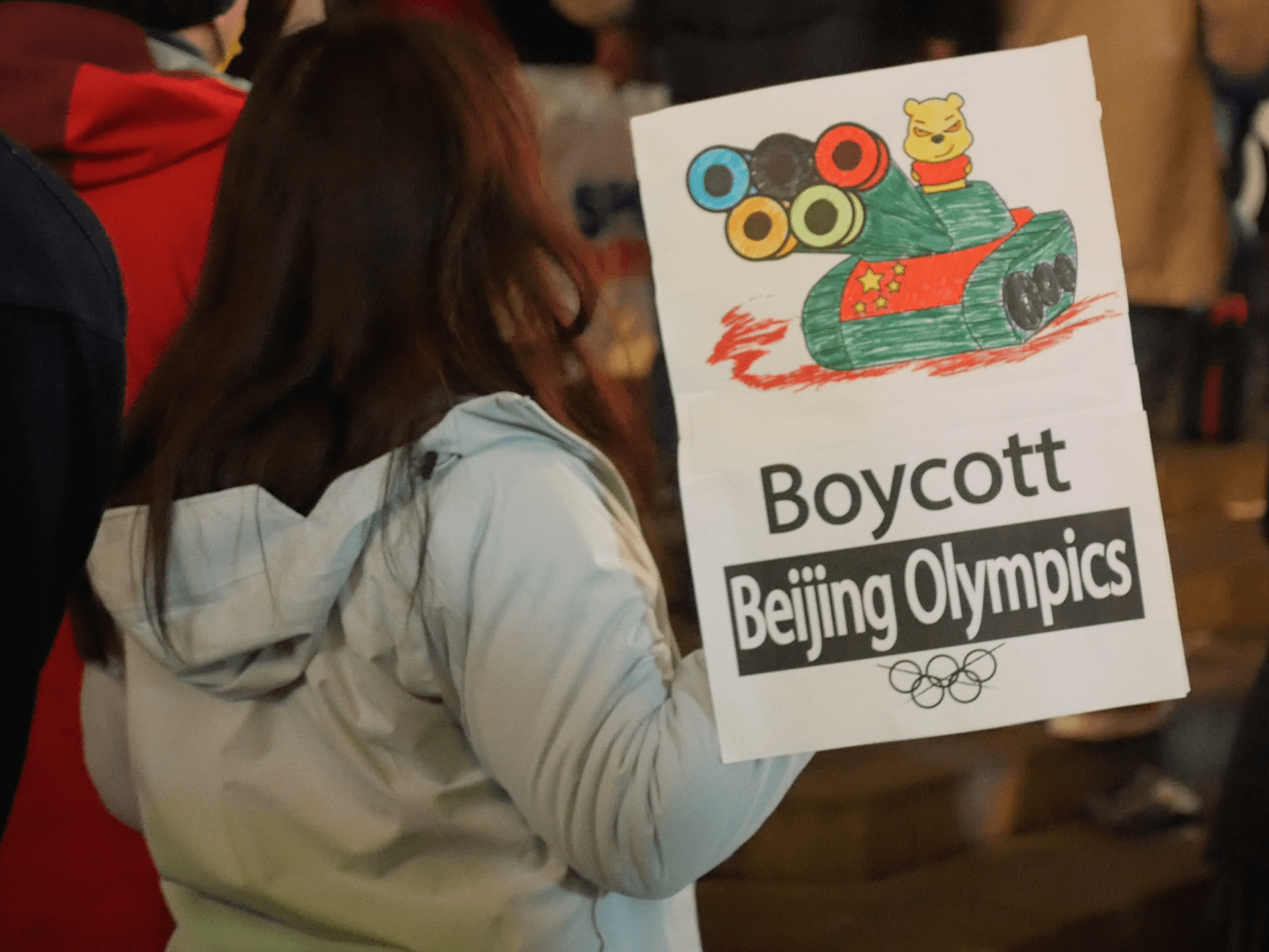 An activist holds a placard mocking Xi Jinping as Winnie the Pooh at a protest in London against the Beijing Olympics, February 3rd, 2022. Kurt Zindulka, Breitbart News

Tory MP Nusrat Ghani, who was also among the UK parliamentarians to be sanctioned by China last year, also took aim at the sponsors of the Olympics, saying that the evidence provided at the Uyghur tribunal in London last year should have made it “clear” that they should not participate in the “Genocide Games”.

She said that companies who supported the Olympics or who use “Uyghur slave labour” will “go down in history as complicit in the Uyghur genocide” and therefore should be “blacklisted”.

“They can never come forward and say ‘we did not know’, we know what is going on. No to the Genocide Games!” Ghani concluded.

The UK director of the World Uyghur Congress, Rahima Mahmut, said that corporate sponsors, the International Olympic Committee (IOC), and Thomas Bach have sold out Uyghurs, Tibetans, and Hong Kongers, saying that they have put “profits over lives”.

“To them, this is a game of money and influence, and we should all be repulsed,” she said.

Mahmut, who has been living in exile from her native Xinjiang in the UK for over twenty years, said: “We have been here before, Tibetans remember when Beijing hosted the games in 2008. They also remember the arrests, repression, and mass detention that followed any descent.”

“While some said that the Olympics would improve the Chinese government’s human rights record, Tibetans continued life in an open-air prison. Their cultural rights are trampled, Tibetan children are taken to state-run boarding schools, where they are severed from their identity and forced to forget their native tongue.” 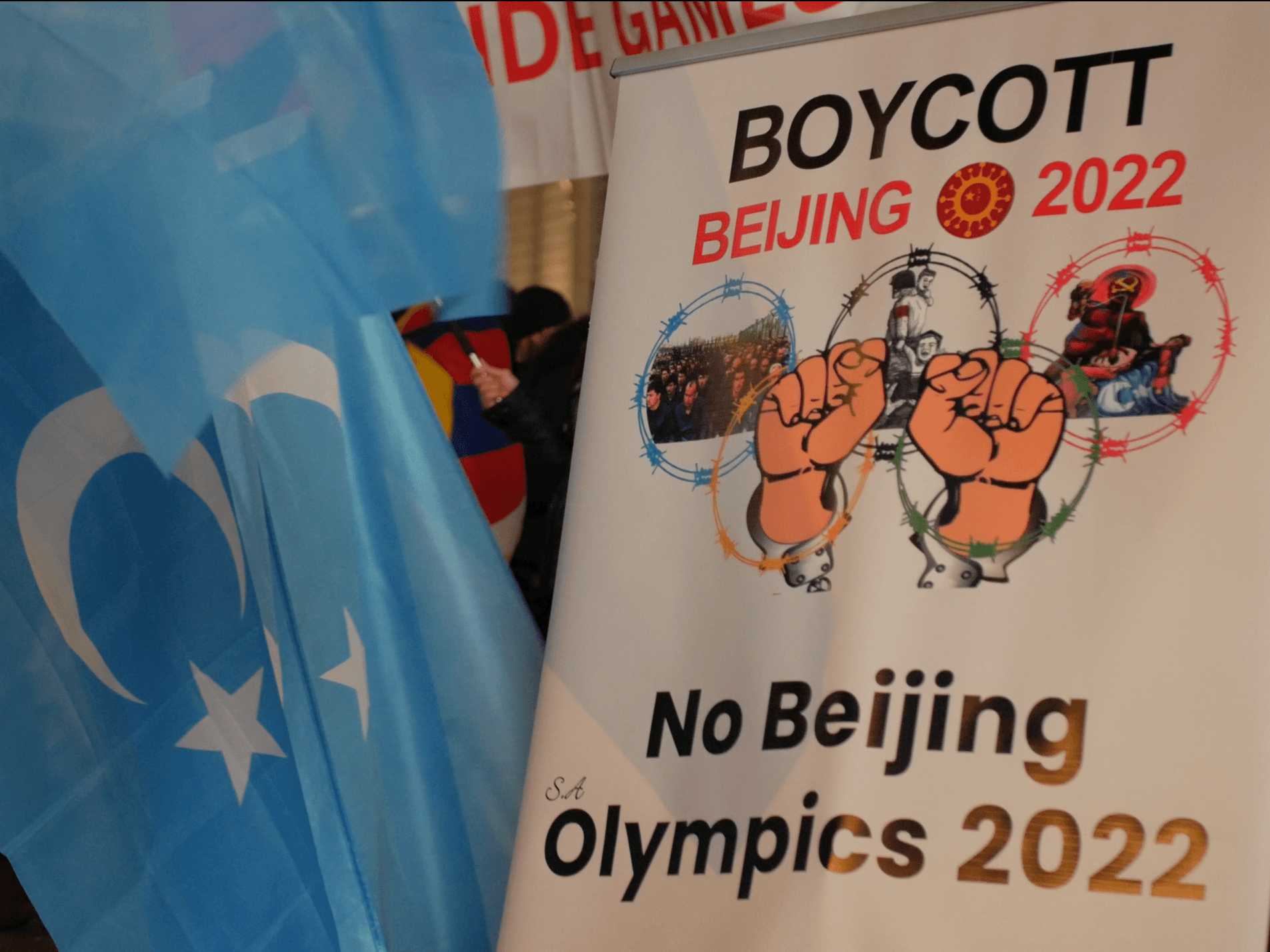 An activist holds a placard at a protest in London calling for a boycott of the Beijing Olympics, February 3rd, 2022. Kurt Zindulka, Breitbart News

The Uyghur activist said that her countrymen are facing a “genocide in our own homeland”, saying: “Our people live under constant surveillance, our women are sterilised, our babies are forcefully aborted, millions are detained in concentration camps, where they face torture, systematic rape, and even organ harvesting.”

“As a people, we are traumatised, the Chinese government is doing unspeakable things to our community while most of the world looks on and does nothing,” she said.

Mahmut said that the speed at which democracy and freedom were abolished in Hong Kong “has alarmed us all”, saying that the former British colony has become “unrecognisable” after the forceful repression of the pro-democracy movement, which she noted has seen all prominent freedom activists either “in exile or jail”.

One such exiled Hong Kong political activist, Finn Lau, also addressed the crowd and vowed to continue his efforts to pressure the British government and other democracies to help “free our homeland”.

“We cannot choose the times we live in, but we can choose how we respond,” Lau said.