Leftist Prime Minister Justin Trudeau has yet to comment on the anti-pipeline extremists at press time. Trudeau has referred to the Freedom Convoy protesters as “tinfoil hat” wearers and equated them with Nazis.

A member of the Royal Canadian Mounted Police (RCMP) was injured after a group of around 20 masked anti-pipeline extremists, some of which were armed with weapons, attacked a pipeline worksite in the northern British Columbia community of Houston. According to a press release from the Houston RCMP, the incident took place at the Marten Forest Service Road just after midnight on Thursday, with security working for the Coastal Gas Link (CGL) company reporting “acts of violence.” 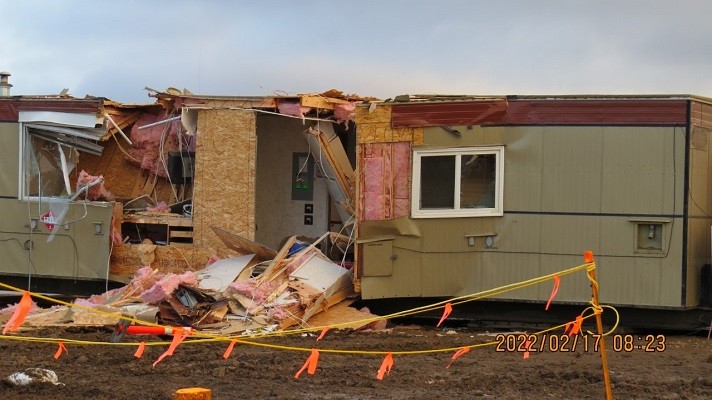 “It was reported approximately 20 people, some armed with axes, were attacking security guards and smashing their vehicle windows. It was initially reported that some CGL employees were trapped, but all had managed to safely leave the area,” the RCMP said.

“Upon police attendance at the 41 km mark, the roadway had been blocked with downed trees, tar covered stumps, wire, boards with spikes in them, and fires had been lit throughout the debris. As police worked their way through the debris and traps, several people threw smoke bombs and fire lit sticks at the police, injuring one officer,” police added.

Police say that the extremists had blocked a road with an old school bus and that when police arrived at the pipeline building site, “significant damage” had been done to some of the heavy machinery and portable buildings on the site.

RCMP Chief Superintendent Warren Brown, North District Commander, commented on the attack saying, “This is a very troubling escalation in violent criminal activity that could have resulted in serious injury or death. This was a calculated and organized violent attack that left its victims shaken and a multimillion-dollar path of destruction.”

Canadian banks will receive the names of people involved in “Freedom Convoy” protests that have descended on the nation’s capital, a first step in a financial crackdown on demonstrators being instituted by the far-left government of Justin Trudeau. https://t.co/4ECPR9r8h0

“While we respect everyone’s right to peacefully protest in Canada, we cannot tolerate this type of extreme violence and intimidation. Our investigators will work tirelessly to identify the culprits and hold them accountable for their actions,” he added.

The attack comes just days after Trudeau invoked the Emergencies Act to deal with peaceful Freedom Convoy protests across the country against Wuhan coronavirus restrictions, vaccine mandates, and vaccine passport systems. Part of the Emergencies Act emergency Measures Regulations declares that assemblies are prohibited in areas of critical infrastructure, which include “infrastructure for the supply of utilities such as water, gas, sanitation and telecommunications.”

The Trudeau government has also used the Emergencies Act to freeze bank accounts connected to the Freedom Convoy organisers and others participating in the protests.

It is unknown if the act will apply to those behind the attack on the pipeline construction project as Mr Trudeau has not commented on the attack.

“Will the Trudeau Liberals declare this terrorism and use the Emergencies Act to seize bank accounts and homes or turn a blind eye to this again? Shocking,” Canadian journalist Brian Lilley said, commenting on the Houston pipeline attack.

Canada's Justice Minister David Lametti has told Trump supporters who donated to the "Freedom Convoy" to be worried about accounts frozen. https://t.co/hEU8oQ4EUS

Update: On Monday evening Prime Minister Trudeau issued a statement regarding the incident on Twitter, saying, “This violence is unacceptable, and this intimidation is inexcusable. I strongly condemn this behaviour – in Canada, this is not how we express our differences or advance our causes.”

“My thoughts are with the officer who was injured, and with the workers who were threatened,” he added.