The United Nations’ highest court on Wednesday ordered Russia to immediately end its invasion of Ukraine, take no further steps into the country and prepare for sternly mediated peace talks. Moscow roundly ignored the globalist organization and continued fighting anyway.

Two weeks ago, Ukraine approached the International Court of Justice (ICJ) – also known as the World Court – to intervene, arguing Russia violated the 1948 Genocide Convention by falsely accusing Ukraine of committing genocide and using that as a pretext for the ongoing invasion.

The ICJ resolves legal complaints submitted by states over alleged breaches of international law. It is the supreme judicial institution of the United Nations.

“The Russian Federation shall immediately suspend the special military operations it commenced on 24 February 2022,” the court’s president, U.S. judge Joan E. Donoghue, said from the Peace Palace building when announcing the call for an end to the war.

She spoke as dozens of protesters gathered, many carrying placards saying, “Stop Putin” and “Shelter our Skies,” in a reference to Ukrainian President Volodymyr Zelensky’s request for NATO to impose a no-fly zone over Ukraine. 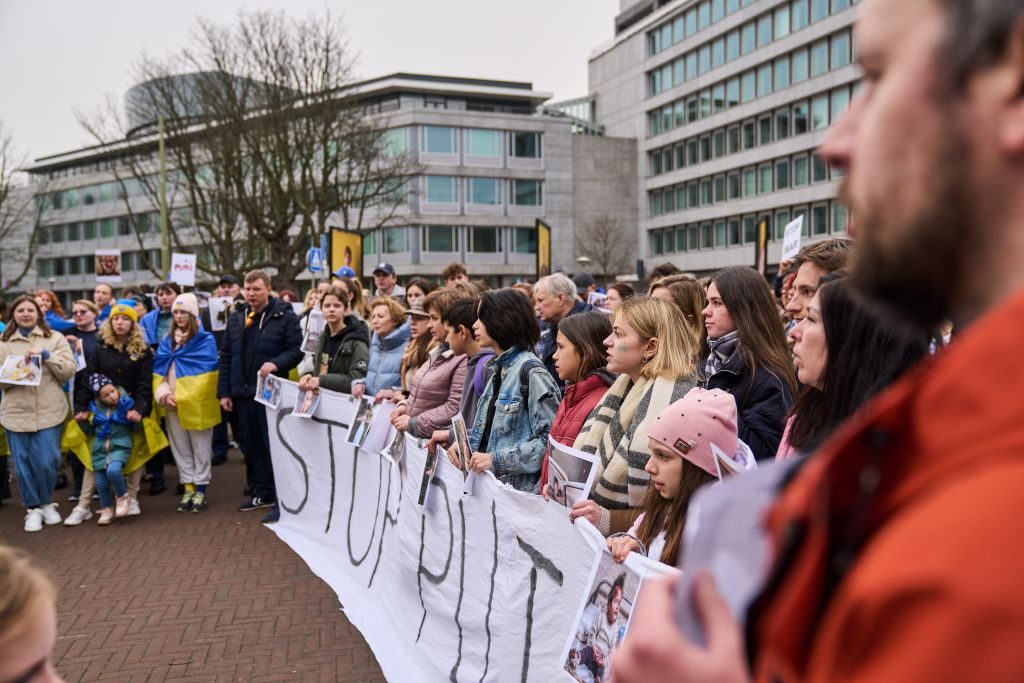 Demonstrators hold a banner reading “Stop Putin” at the Hague, on March 16, 2022 as they wait for the verdict of the International Court of Justice (ICJ) in the proceedings launched by Ukraine against Russia requested by Ukrainian President Volodimir Zelensky. (PHIL NIJHUIS/ANP/AFP via Getty)

AP reports countries that refuse to abide by court orders can be referred to the U.N. Security Council, where Russia holds veto power.

Moscow snubbed a hearing last week, when lawyers for Ukraine told the court Russia had started an “unprovoked aggression.” Moscow justified its use of force by saying “it was acting in self-defence.”

In written arguments submitted later in the week, Russia argued in writing that The Hague-based court lacked jurisdiction to hear the case and nothing in the convention forbids the use of force, AP outlined.

In a 13-2 decision, the “profoundly concerned” court also ordered Moscow to ensure military units “take no steps” to further the conflict, which Russia refers to as a “special military operation.”

Trump said he knew Putin always wanted to take over Ukraine, but that as president he refused to let it happen. https://t.co/0LwMhvNCIs

The Russian and Chinese judges dissented.

In the days since the March 7 hearing, Russia has intensified its military strikes on towns and cities across Ukraine hitting civilian infrastructure across the country, including a deadly strike on a maternity hospital in Mariupol, and sending more than three million refugees fleeing across borders.

The U.N.’s previous effort to intervene in hostilities ended up with the selection of a new dedicated human rights panel of experts with associated committees and sub-committees to advise on further possible peace talks, as Breitbart News reported.