The charity which owns the statue celebrating Europe’s single currency complains it spends so much money on repairs, it can no longer afford to deliver the anti-racism and pro-Euro education in schools it wants to.

The most visible and famous single symbol associated with the Euro single currency, the European project and possibly the European Union itself is to be sold at auction after its present owners came to find it too much of a burden. Standing outside the one-time headquarters of the European Central Bank in Frankfurt, the 46-foot, 50-ton illuminated Euro-Skulptur has graced countless news reports about the European Union since it was inaugurated in 2001 as convenient shorthand for the bloc’s single greatest project, a single European currency.

Yet the statue has been repeatedly vandalised in recent years, to the extent that its owner can no longer afford to keep it in a “safe condition”, so reports Euronews.

Frankfurt-based charity Frankfurter Kultur Komitee (FraKK) who were given the piece by artist Ottmar Hörl is now placing the piece up for sale, with an auction coming in October.

The report notes how FraKK have tried to solicit additional funding to help keep the statue up — the European Central Bank has already given €15,000, it is said — have failed and repairs have run down their ability to fulfill the charity’s other goals. Euronews reported:

…FraKK said financing from private sponsors was “no longer sufficient” for the 50-tonne steel sculpture to be kept in a “safe condition”.

They also pointed to increasing vandalism over the last two years, which had “used up” the association’s finances, forcing it to curtail other activities aimed at tackling racism and promoting the euro in schools.

Why anyone would want to vandalise an artwork celebrating the European Union’s single currency which plunged millions of Europeans in poorer nations in the south of the continent into a spiral of poverty is obviously a mystery. 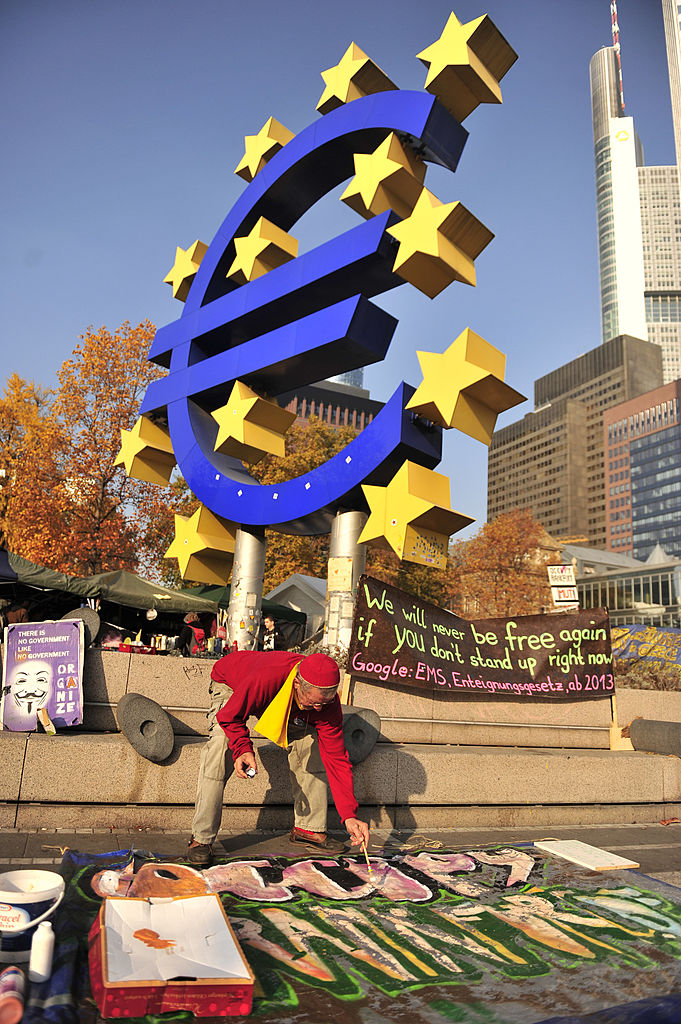 A protester writes on the ground in front of the Euro symbol on the grounds of the protest camp of “Occupy Frankfurt” in Frankfurt am Main, Germany, on November 8, 2011. The protesters want to shrink the power of capitalism and provide information on the current problems of the financial market. They model themselves after the US American ‘Occupy Wall Street’ movement. AFP PHOTO / MARC TIRL GERMANY OUT (Photo credit should read MARC TIRL/DPA/AFP via Getty Images) 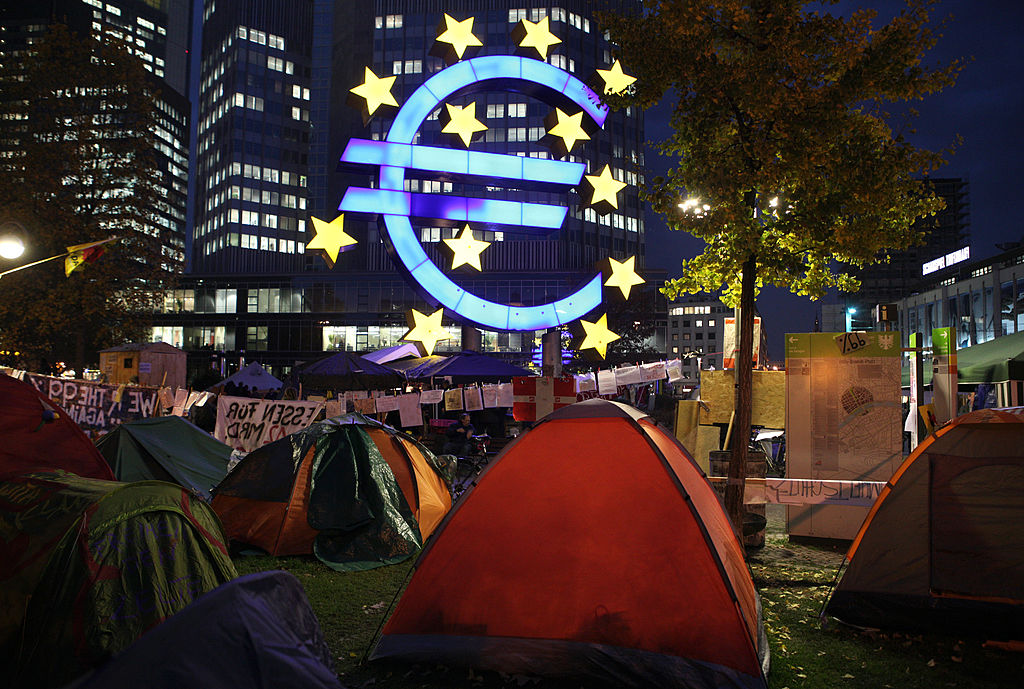 Activists camp outside the headquarters of the European Central Bank (ECB) as part of the Occupy Frankfurt protest in Frankfurt, Germany, on Wednesday, Nov. 2, 2011. The European Central Bank unexpectedly cut interest rates at Draghi’s first meeting in charge as the new ECB head signaled officials have no plans to help bail out cash-strapped nations facing an escalating debt crisis that threatens to splinter the euro region.Photographer: Hannelore Foerster/Bloomberg via Getty Images 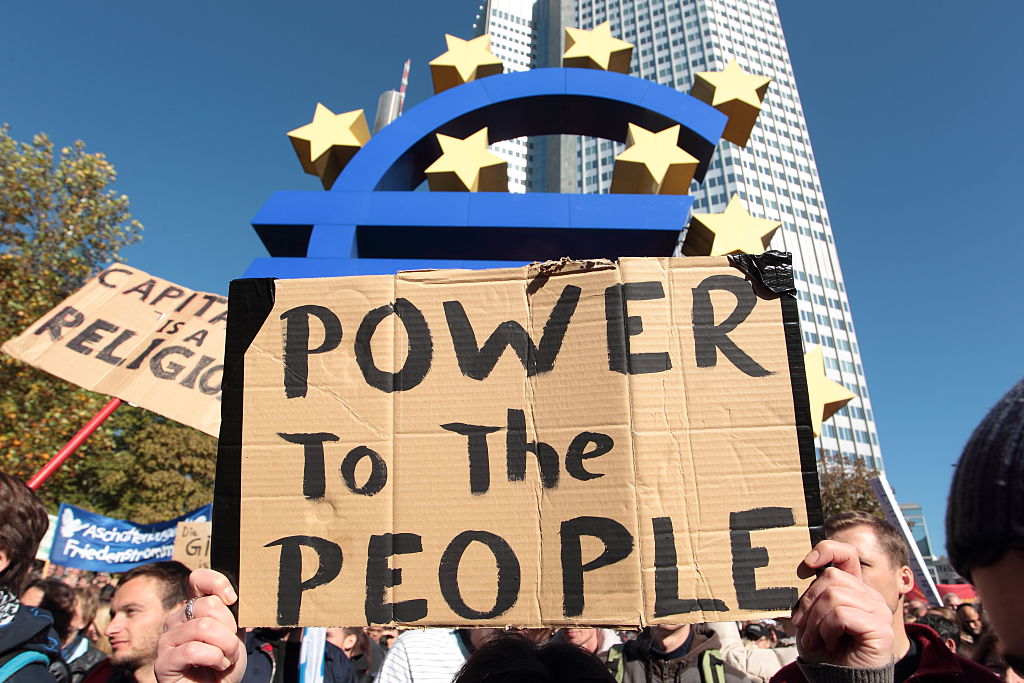 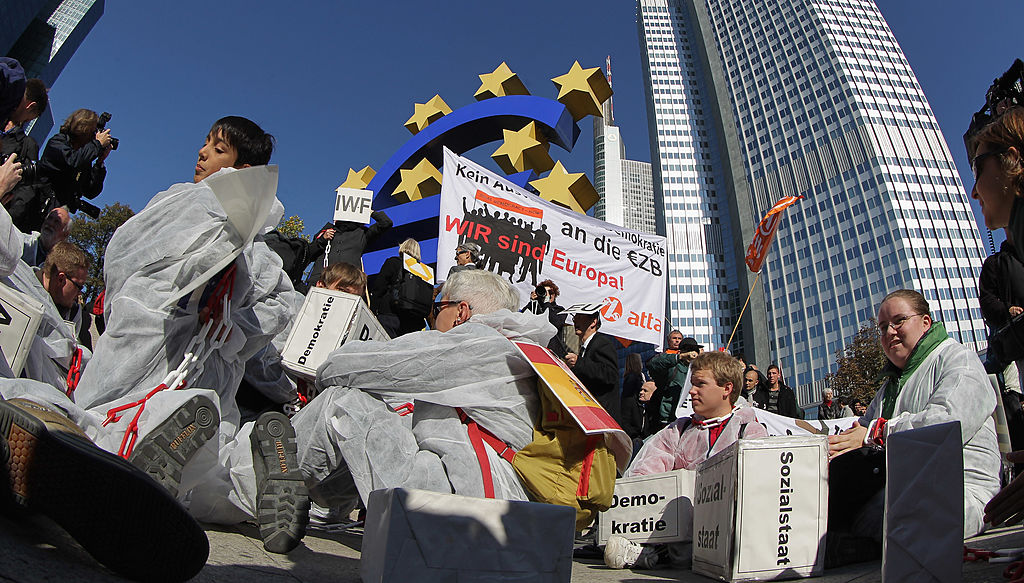 FRANKFURT AM MAIN, GERMANY – OCTOBER 15: Protesters demonstrating against the influence of bankers and financiers sit on the floor next to the Euro symbol in front of the European Central Bank (EZB) on October 15, 2011 in Frankfurt am Main, Germany. Thousands of people took to the streets today in cities across Germany in demonstrations inspired by the Occupy Wall Street protests in the United States. Activists are demanding an end to the free-wheeling ways of global financial players whom they see as responsible for the current European and American economic woes. (Photo by Johannes Simon/Getty Images)