The high-stakes fight over the stalled EAGLE Act outsourcing bill now has a simple battle line: The West Coast tech investors and pro-migration progressives versus everyone else.

The battle lines became visible on Thursday when top technology investors — fronted by Amazon and Microsoft — emerged from the fog to announce their support for the outsourcing bill. This force only appeared after their allies on the Hill — chiefly Silicon Valley Rep. Zoe Lofgren (D-CA) — failed to stop a loose alliance of opponents from lining up against the bill.

The opponents include most rank-and-file Republicans, some Democrats, the immigration lawyers’ association, hospital chains, a leading member of the black caucus, and a medley of groups representing would-be immigrants who fear they will be pushed aside by a flood of Fortune 500 indentured workers.

“Progressive and conservative groups are trying to stop the EAGLE Act … I think it’s really an unprecedented situation,” tweeted David Bier, a pro-migration activist for the Cato Institute.

So far, the tech guys are losing to everybody else — the bill has been delayed at least one week, leaving the advocates even less time to rush the bill through the Senate.

The EAGLE Act would turbocharge companies’ incentive to import college graduates — most from India and China — into a wide variety of Fortune 500 careers that are needed by young American graduates — including millions of swing-voting graduates who helped the Democrats abort a GOP blowout in November. Section 7 of the bill “is an end-run around the annual green card limit,” Rep. Scott Fitzgerald (R-WI) told the Committee on Rules on December 5.

The visa-worker inflow has been growing since 1990, and it has helped to keep tech worker waves flat since 2009. The inflow has also allowed C-suite executives to suppress the workplace clout of professionals, maximize share prices at the cost of other priorities, and suppress the spinoff of rival companies by ambitious U.S. graduates.

The investor-owned Fortune 500 companies, and their pyramids of subcontractors, now employ roughly 1.5 million foreign contract workers in a wide variety of jobs needed by many underemployed and indebted U.S. technology graduates and their families.

The EAGLE Act would accelerate the inflow by allowing Fortune 500 companies to trade many more valuable green cards to Indian graduates in exchange for several years of lower wage, uncomplaining work.

But the bill also hides an even bigger corporate giveaway in Section 7: It would let U.S.-based employers trade the huge prize of lifetime U.S. work permits to an unlimited number of foreign workers in exchange for several years of cut-rate blue-collar or white-collar service.

We are proud to support the EAGLE Act and are continuing advocate for common sense immigration reform on behalf of our employees and their families. We urge Congress to pass the #EAGLEAct, lifting unfair per-country visa caps for employment-based green cards

Microsoft has long supported the #EagleAct and its core provisions of eliminating EB per country limits and improving fairness in the green card process. It’s critical for Congress to consider these issues and bring much needed relief to those facing these extraordinary backlogs.

The U.S. tech sector has hired so many visa workers that a growing share of its middle-ranked and senior leadership consists are picked from a sprawling network of current and former visa workers. For example, Microsoft‘s CEO and chairman is Indian-born Satya Nadella, and Twitter’s recently departed CEO is Parag Agrawal who was apparently picked by the company’s board while he was still an H-1B visa worker. In turn, the CEO report to the company boards, which are dominated by representatives of major investors.

The EAGLE Act would greatly benefit the two companies because they are the greatest users of the H-1B visa program. The program keeps more than 500,000 foreign graduates in U.S. jobs by dangling the prize of U.S. citizenship in exchange for several years or more of dutiful servitude:

The MyVisaJobs site shows that Amazon asked for 21,000 three-year H-1B visas in 2022 plus 5,810 green cards as a bonus for those H-1Bs are already in the United States. 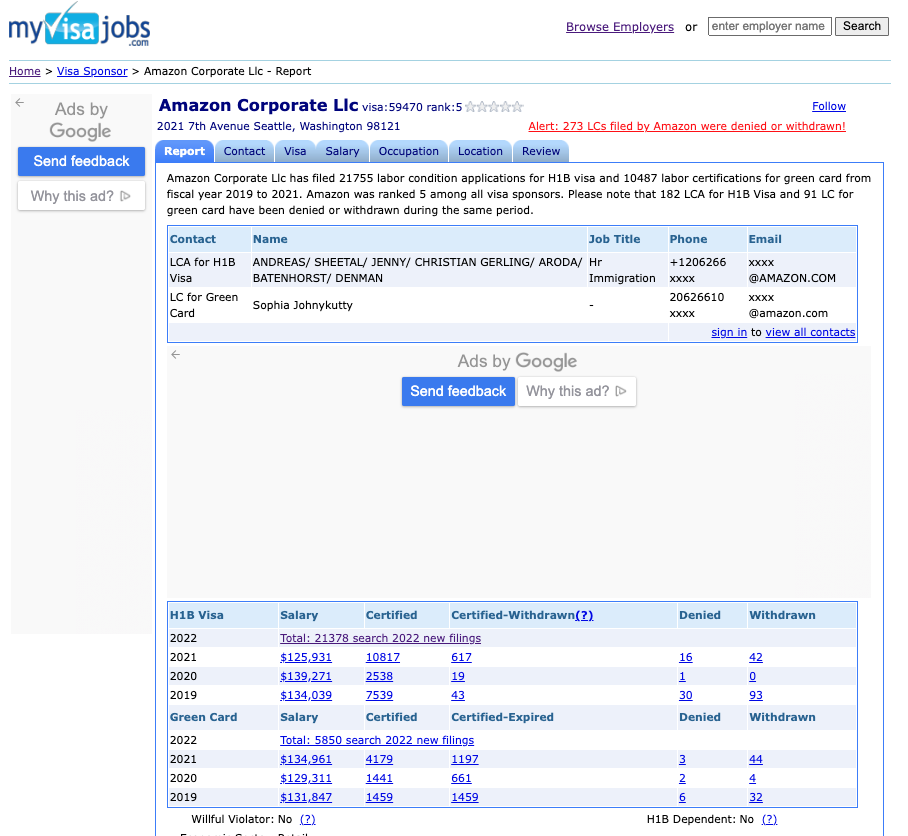 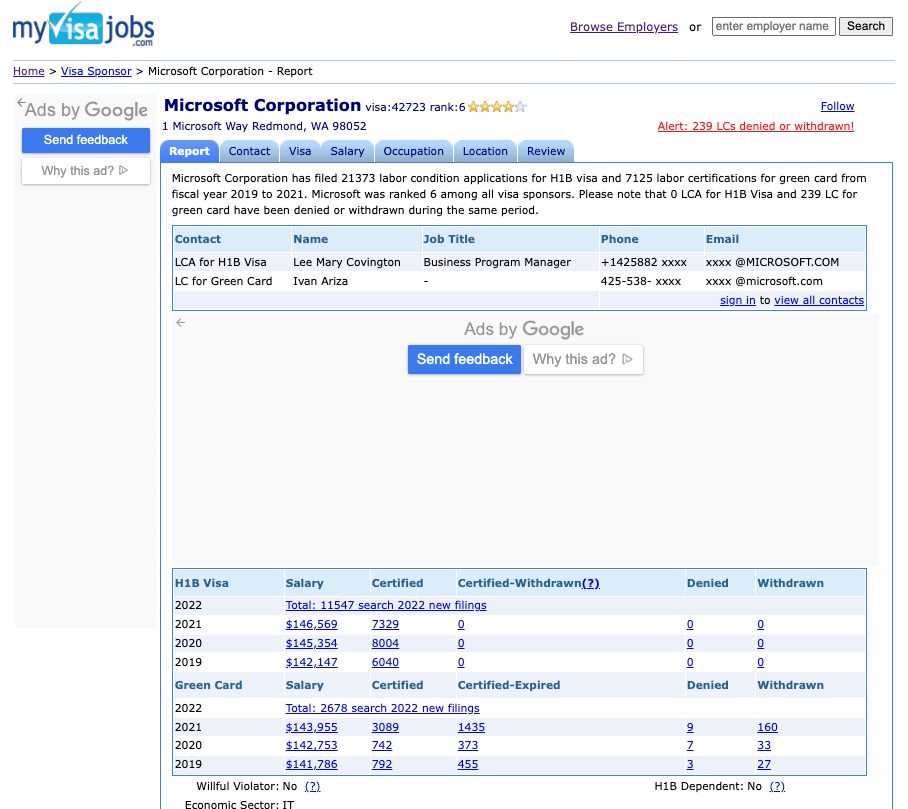 The MyVisaJobs site showed that Microsoft wanted roughly 11,000 three-year H-1B visas in 2022, plus 3,000 green cards as a reward for its current visa workers:

The federal government provides very little information about corporate hiring via the other L–1, J-1, and H4ED foreign-worker programs. Those programs include roughly 600,000 foreign workers in jobs that could be performed by many of the underemployed American technology graduates.

In 2022, the U.S. government quintupled the award of green cards to Indian graduates.

The tech companies’ public intervention is unusual because the investors prefer to do much of their public advocacy behind a screen of lobby groups, astroturf fronts, and plaintive pleas from camera-ready advocates.

For example, the very visible Immigration Voice group presents Indian visa workers as the primary beneficiaries of the giveaway act. But the group’s “advisory board” consists of a long-standing lobbyist for the tech industry and Neil Patel, the owner of the DailyCaller.com and a former staffer for Vice President Dick Cheney,

Similarly, the Eagle Act has been repeatedly pushed by FWD.us, which is an investor-created advocacy group for more migration. “Per-country caps on green cards create decades-long backlogs, making the immigration system less efficient & less fair,” FWD.us declared in September. ‘The bipartisan EAGLE Act would help fix that by reforming the caps, said the FWD.us report, which did not describe the new work-for-work-permits incentive and pipeline.

The breadth of investors who founded and funded FWD.us was hidden from casual visitors to the group’s website sometime in the last few months. But copies exist at the other sites. The 2013 founders included Facebook founder Mark Zuckerberg, Microsoft founder Bill Gates, John Doerr at Kleiner Perkins, Matt Cohler at Benchmark, and Reid Hoffman, a partner at the Greylock Partners investment firm who also sits on Microsoft’s board.

This outsourcing campaign has been ignored by establishment outlets, such as the New York Times and the Washington Post, which is owned by Jeff Bezos, the owner of Amazon.

The investors are being backed by their Silicon Valley ally, Lofgren. They are also backed by leaders in the Democrats’ pro-migration identity-group causes, including Rep. Pramila Jayapal (D-WA), the Indian-born leader of the progressive caucus. These groups play up the gains for Indian workers — but they dodge the concerns about the act’s Section 7 incentives for the Fortune 500 to hire foreign workers instead of Americans.

NEW: House Dems just received a long 'Dear Colleagues' from @RepZoeLofgren, @RepJayapal, @RepRaulRuizMD, @RepKarenBass, and @RepJudyChu in SUPPORT of #EagleAct. "We must advance improvements that improve people’s livelihoods while doing no harm to others." Here's the text — pic.twitter.com/chbhVxZD15

So far, the GOP leadership has opposed the EAGLE Act by saying it helps China’s communist government get more access to U.S. business. But Democrats have added language to take that objection away from the GOP leaders, who are fully aware that one in six of their voters in November said immigration controls are their top priority.

GOP opposition to the EAGLE Act is complicated by Rep. Tom Emmer (R-MN) who managed the House Republicans’ 2022 election campaign. He eked out a narrow win in the 2022 election after he accepted huge donations from investor groups. Notably, the GOP campaign minimized criticism of the pocketbook damage caused to Americans by President Joe Biden’s cheap-labor migration policies.

Emmer was elected GOP whip in the next Congress.

Overall, investors and their companies employ roughly 1.5 million foreign contract workers in jobs that were denied to American graduates.

A 2021 study by the Census Bureau reported massive underemployment among U.S. graduates amid the replacement-level inflow of visa workers:

The vast majority (62%) of [American] college-educated workers who majored in a STEM [science, technology, engineering and math] field were employed in non-STEM fields such as non-STEM management, law, education, social work, accounting or counseling. In addition, 10% of STEM college graduates worked in STEM-related occupations such as health care.

The pre-inflation salaries in the tech sector rose from $78,845 in 2009 to $93,244 in 2018 and $104,566 in 2021. But that shows a slight decline of 0.3 percent according to the inflation calculator offered by the Bureau of Labor Statistics. As tech salaries stalled, tech investors gained trillions of dollars in extra value from escalating profits and stock prices.

The flat salaries for tech workers also allow many employers to cut salaries for many other non-tech graduates. “Most college graduates have actually seen their real incomes stagnate or even decline” since 2000, New York Times columnist Paul Krugman wrote in April.

The replacement of free-speaking American professionals with indentured foreign labor also allows executives to discard important civic priorities. These priorities — such as security, privacy, and durability of high-tech infrastructure — are sacrificed to lower costs and raise stock prices. The resulting damage was exposed by losses at Intel, and Boeing, and by the bankruptcy and jailings at Theranos.

Many polls show the public strongly opposes corporate labor migration into the jobs that Americans need for middle-class lives, homes, and families.