WASHINGTON, DC – The national security subcommittee of the U.S. House of Representatives Oversight Committee held a congressional hearing Wednesday, chaired by Rep. Ron DeSantis (R-FL), with testimony about whether the United States should move its Israeli embassy from Tel Aviv to Jerusalem.

Conservative radio talk show host Mark Levin and his wife were also present for the hearing.

“Jerusalem has been the capital of the Jewish people for thousands of years and is the beating heart of modern Israel,” DeSantis said.

Israel’s stewardship of Jerusalem’s holy sites has been tremendous, especially regarding religious freedom. During the Arab occupation of the Old City of Jerusalem (between 1949-1967), Jews were systematically discriminated against, and Christians were treated as second-class citizens. Most of the Old City synagogues were destroyed or desecrated.

He pointed out that, conversely, “under Israeli sovereignty, religious freedom is the rule and the Holy Sites – Christian, Jewish, and Muslim – are treated with care and respect. The disrepair that plagued Jerusalem under Arab occupation has given way to a flourishing city that is one of the world’s crown jewels.” He added, “Following the commitment to move the embassy will demonstrate American leadership.” 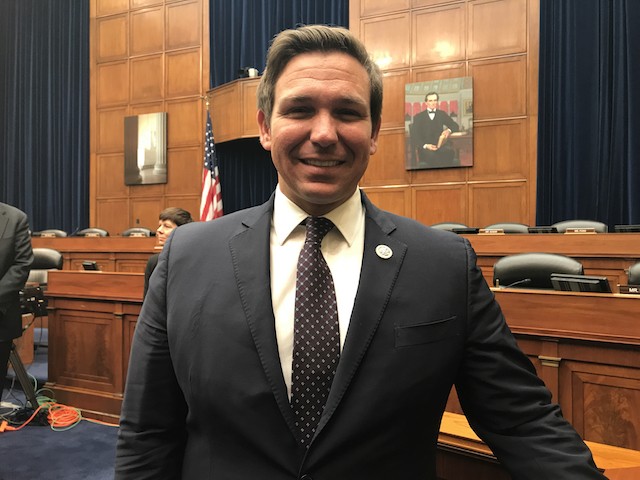 DeSantis also pointed out that some have warned that the move would provide a pretext for acts of terrorism. “That may be true, but it doesn’t make sense to shirk from doing what is right for fear of what our enemies might do,” he said.

Congress has recognized Jerusalem as Israel’s capital since 1995, when it passed the Jerusalem Embassy Relocation Act, and has called for America’s embassy there to be relocated to Jerusalem since that time.

In January, President Donald Trump signed a six-month waiver to delay moving the U.S. embassy in Israel to Jerusalem, as have former Presidents Bill Clinton, George Bush, and Barack Obama.

The White House issued an accompanying statement indicating the commander-in-chief is committed to seeing the embassy move to completion. “As he has repeatedly stated his intention to move the embassy, the question is not if that move happens, but only when,” the White House wrote.

Many have expressed hope and optimism that Trump will officially order the move before he completes his first term in office.

“It stands to reason that America’s diplomats posted abroad should be located near the seat of government to which they are accredited,” Bolton said.

He pointed to the three main arguments against moving the embassy. The first argument, he said, is that “moving the embassy, even to West Jerusalem, would somehow affect final status negotiations about that city.” He said, “I think this stems from UN General Assembly resolution 181 which contemplated an international status for Jerusalem.”

He noted that the Arab states rejected it shortly after it passed.

“The second argument is that it would break the broader Middle East peace process. And I have to say that if it is such a delicate snowflake that moving our embassy would destroy it, you have to ask what its viability is to begin with.”

Bolton added, “And finally, to conclude, Mr. Chairman, we hear over and over again that we want to move the embassy, but the timing is just not right.”

“In diplomatic circles, Mr. Chairman, ‘not now’ too often means ‘not ever.’ We should reject that counsel and move the American embassy to Israel’s capital city.” 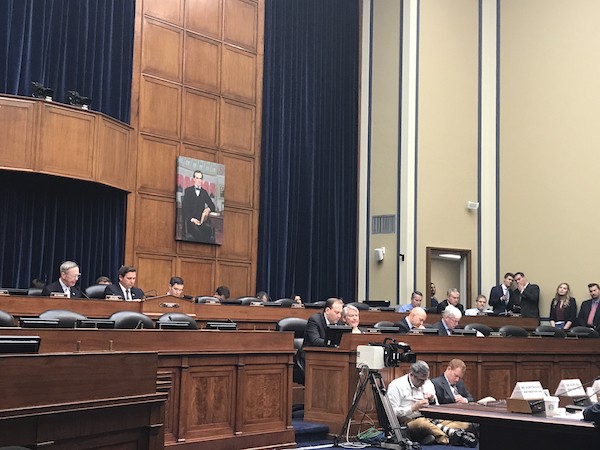 Rep. Stephen Lynch (D-MA) expressed that, while he appreciates the religious freedom that is available now in Jerusalem, he was “strongly concerned that we must proceed with caution” and argued, like several of his other Democratic colleagues would over the course of the hearing, that the move could send Jordan’s monarchy into a state of disarray.

Koplow and several Democrats expressed concern that moving the embassy to Jerusalem might cause civil unrest in Jordan and Egypt and suggested it could result in the toppling of the Jordanian monarchy. Koplow noted that “Jordan is a country that is majority Palestinian.” Some have argued that Palestinians are Jordanian.

Gold said, “Only a free and democratic Israel will protect the holy sites” and warned that “Jerusalem must not be left to the vagaries of the Middle East.”

“We are further away from peace today than we were years ago,” Klein said as he held up several printouts of posters that the Palestinian Authority and Fatah put up in schools promoting violence against Israelis.

“Jerusalem is not a holy city to Muslims,” Klein said. In the holy Quran, Jerusalem is never mentioned,” he said, adding that in the Jewish holy books, it is mentioned 700 times. Jerusalem is also mentioned in the New Testament.

Klein also noted how then-Sen. Joe Biden (D-DE) once said, “Moving the U.S. embassy to Jerusalem will send the right signal, not a destructive signal.”

Rep. Mark Meadows (R-NC), chairman of the Freedom Caucus, asked Bolton if he thought a potential failure to move the embassy to Jerusalem would offend the Jewish diaspora in the United States. Bolton said he could not answer on behalf of the Jewish community, but added, “As a Lutheran, I would be offended.” Meadows laughed and said that he, too, would be offended, as an evangelical.

“I think we should take very seriously the concerns of countries like Jordan and Egypt, but I don’t think that means they have veto power,” he added.

Bolton said neither Israel nor the United States would allow for the Jordanian government to be overthrown and taken over by a terrorist regime. He added, “I think the greatest threat to peace and security in the Middle East remains the Iranian nuclear weapons program.”

Speaking with Breitbart News after the event, Duvi Honig, CEO and founder of the Orthodox Jewish Chamber of Commerce, said the enemies of Israel “use the embassy move as a weapon to create anti-Semitism. Their goal is not the embassy. It’s anti-Semitism.”

“We have to speak about the fact that they are using the embassy as a tool to promote anti-Semitism, as well as the BDS movement, on a global level–a tool to create hate,” he added.