Back in mid-February, Director of National Intelligence James Clapper warned that al-Qaeda had “infiltrated” the Syrian opposition. At roughly the same time, videos began emerging on the internet that clearly revealed just what an understatement–to put it mildly–Clapper’s observation represented. The videos show Syrian rebel brigades proudly posing with the al-Qaeda flag and protestors holding it high. (See “Al-Qaeda in Rebel Syria” here.) This was not a matter of “infiltration,” with the word’s connotations of stealth and cunning, but rather of an openly publicized affiliation.

In the meanwhile, an even more revealing video has come to light. It shows demonstrators in a public square in Syria holding up the al-Qaeda flag and chanting “Allahu Akbar!” What is particularly notable about this video, however, is that the demonstrators are women. The women are fully veiled from head to foot, with black niqabs or facial veils covering all but their eyes. In addition to displaying al-Qaeda’s distinctive black flag, some of them wave the green-white-and-black flag of the Syrian rebellion. Others wear scarves featuring the colors of the rebellion. 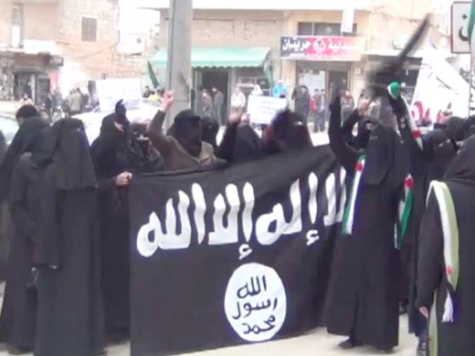 Asked about the video, the French Syria specialist Frédéric Pichon identified the location as Hraytan based on the aforementioned elements. Pichon noted that while the setting indeed looks like a Syrian city, “the style [of the demonstration and the female demonstrators] is much more Saudi – which is to say, Wahhabi.” Wahhabism is the purist, ultra-conservative form of Islam that predominates in Saudi Arabia. Pichon added that after forty years of secular Baathist rule, facial veils of the sort seen in the video are not typical of Syria.

Saudi Arabia and fellow Gulf oil monarchy Qatar are the leading Arab members of the international coalition aiming to oust the Assad regime. It is not clear if the appearance of Wahhabi-style dress in Syria today is a by-product of the anti-Assad rebellion or the result of earlier Saudi-financed efforts at “re-islamization” of Syrian society.

Although it was largely ignored by the Western media, the Bosnian civil war of the early 1990s saw a major influx of foreign mujahideen, including al-Qaeda-linked elements, into Bosnia and the setting up of Wahhabi communities on Bosnian soil. The recent Bosnian film Na Putu (“On the Path”) depicts life in one such Wahhabi community. One of the foreign mujahideen who is known to have fought in Bosnia was none other than Khalid Sheikh Mohammed, who would go on to be the principal al-Qaeda coordinator and alleged “mastermind” of the 9/11 attacks.

Another al-Qaeda-linked veteran of the Bosnian war is Reda Seyam: the presumptive financier of the 2002 Bali bombings. In a pseudonymous memoir published in German, Seyam’s ex-wife Regina Kreis describes witnessing a firing squad of mujahideen wives executing a Serb prisoner. According to Kreis, the German-based 9/11 facilitator Ramzi Binalshibh was also present in Bosnia during the war. Both Muhammad and Binalshibh are presently on trial at Guantánamo Bay.

A copy of the Hraytan demonstration video can be viewed below on Breitbart TV. The copy was recently posted by the “pro-regime” Syrian Truth website. I have used the “Syrian Truth” copy, since it is likely to remain available. It should be noted, however, that the video was originally posted on January 21st, the very day of the demonstration, by an apparent supporter of the rebellion. That the original audience of the video was favorably disposed to the demonstrators and their message can be easily gauged from the corresponding YouTube page, of which I provide a screen cap. Note that, as of this writing, the video has attracted 73 “likes” and only 3 “dislikes.” 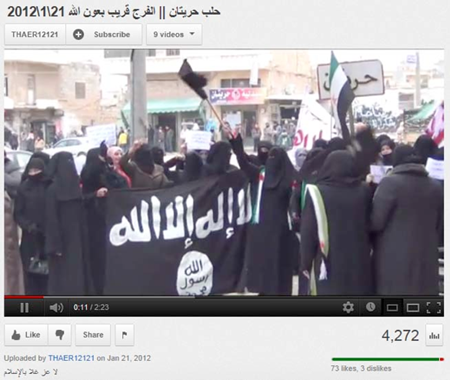 A more telling example of what Andrew McCarthy has termed “willful blindness” could hardly be imagined: Opponents of Assad can flaunt their adherence to the most retrograde current in Islam – displaying the al-Qaeda flag in broad daylight and even posting a video of the gesture on the internet – and still the American government and the American news media refuse to see the reality of Islamic extremism that is right in front of their eyes. The attitude of the media is perhaps more important in the present context, since it is the “willful blindness” of the American media that risks condemning the American public to involuntary ignorance of the truth about the Syrian opposition.

As American policy-makers and editors continue to hold their eyes wide shut, bombs continue to go off in Damascus and other Syrian cities, tearing apart civilians in attacks that have all the hallmarks of the al-Qaeda attacks that America only a few short years ago used to condemn and combat in Iraq. By supporting a Syrian “opposition” that flies the same banner as al-Qaeda in Iraq and employs the same savage methods, America has lost all credibility in what used to be known as the “war on terror.”

John Rosenthal writes on European politics and transatlantic security issues. You can follow his work at www.trans-int.com or on Facebook.