BERLIN, Germany – Over 500 met last night to assert their democratic right in the nation’s capital, despite a “concrete” terrorist threat that saw the Dresden rally at which there would have been 30,000 marching, cancelled at the last moment.

Although the leadership of the PEGIDA or Patriotic Europeans Against the Islamisation of the West as it is more formally known, agreed to the cancellation with Police and urged its members to stay at home, Saxony state police put the city in virtual lockdown last night. Police vans, many even driven in from other states to make up numbers, sat in every road leading to Dresden’s Theatreplatz with Ambulances in reserve. 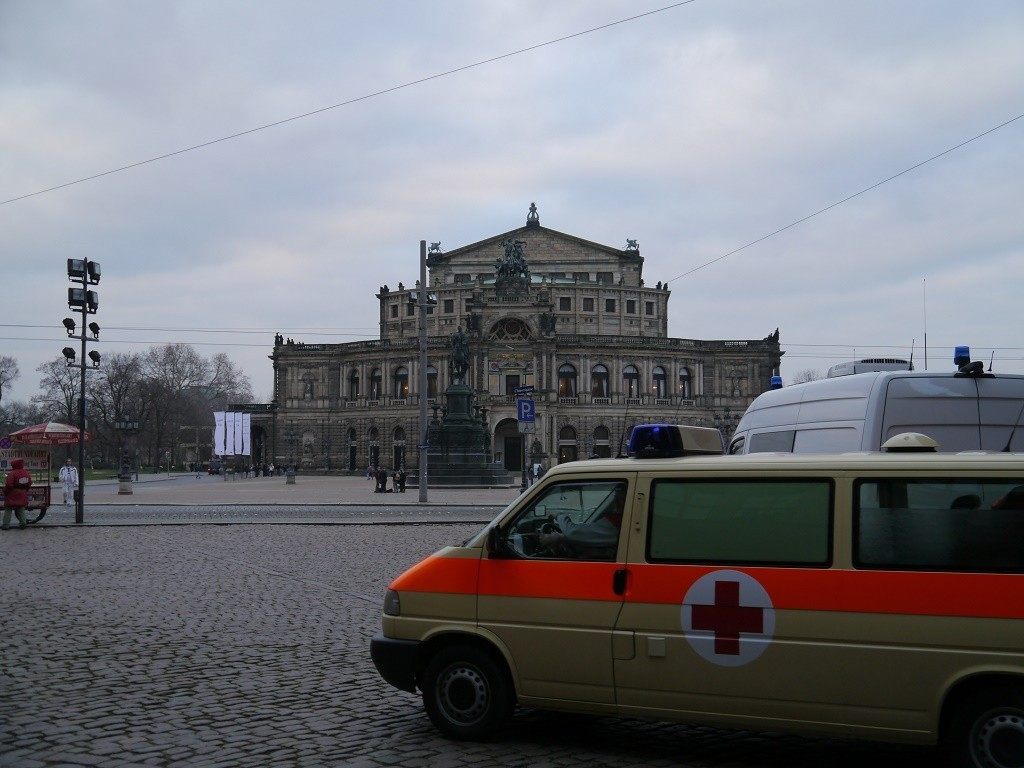 Local police said that despite the protest having been officially cancelled, they were still mounting an operation equivalent to the force needed to control a 30,000 man protest. Yesterday afternoon the vast Theatreplatz before the city’s world-class opera house stood completely empty but for police and a lone television camera crew.

It was a different story in Berlin last night, which despite the German intelligence services reporting on an apparent plot for “assassins” to infiltrate and mingle with crowds, saw a peaceful gathering of between 500 and 1,000 ‘BARGIDA’ (Berlin PEGIDA) supporters.

The principles behind PEGIDA, of the merits of German culture and a rejection of violence, have not taken hold here in the same way they have in deeply conservative Dresden, and it shows. On the other side of a police cordon which seals off a main city street for the march, a coalition of left-wing groups opposed to the movement screams, jeers, and throw fireworks at the group.

As the first rocket explodes the mood of the police officers present, which until this point has been friendly and cooperative, changes as the riot helmets go on. Left-wing groups break away and try to run around the tower blocks to find less heavily defended entry points so they can charge PEGIDA, but columns of police move up to protect the group. 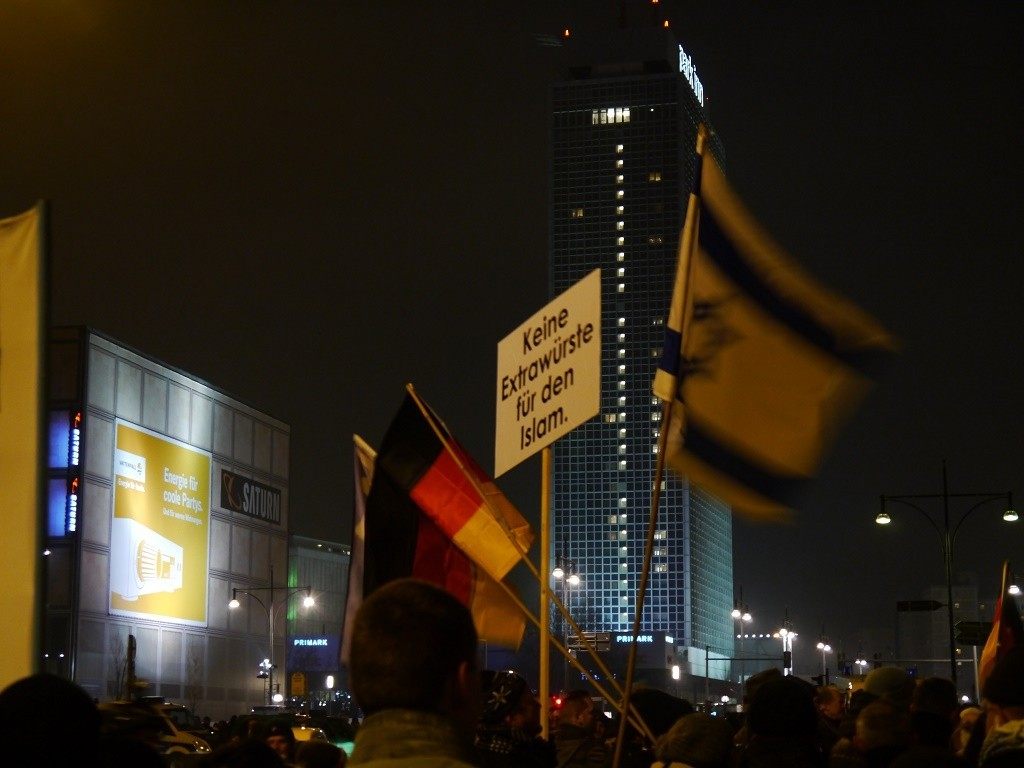 A German sense of humour prevails in the evening. The sign reads “No extra sausages for Islam”. In German the term ‘extrawurst’ has two meanings, either describing a spiced pork sausage eaten cold, or a person who demands unfair special treatment from others, literally one who demands extra food. Oliver Lane / Breitbart London

While the “antis” seem especially shy of cameras and turn their backs when the media faces them, reporters and photographers are able to freely mingle with the PEGIDA crowd who proudly show off their home made banners. Among German and local state flags, an Israeli flag carried by a man with a “Je Suis Charlie” sign stands prominently at the front of the stroll.

Also represented was a group of Burschenshcaften, traditional German student fraternities established at the time of German unification in the 19th century and often associated with strong conservative politics. Their unusual flags, consisting of red and black stripes with a sprig of oak generated considerable interest among both the organisers and the police, who were working together to ensure there was no infiltration by Germany’s small remaining Fascist groups, who had been told specifically to stay away.

Later in the evening the police mistook the flags again, this time for socialist symbols and jumped on the students, but the scowls soon turned to smiles once the mistake had been explained as officers and Burschenschafters exchanged jokes.

The evening’s speeches came from half a dozen members of the BARGIDA committee, touching on the usual issues of the Islamisation of Europe, the difficulties presented by the emergence of parallel societies within Western nations, and the informal coalition of German politicians, arts, and newspapers. When the “Luggenpresse” (Liar Media) is mentioned in speeches, the crowd voices their disapproval. 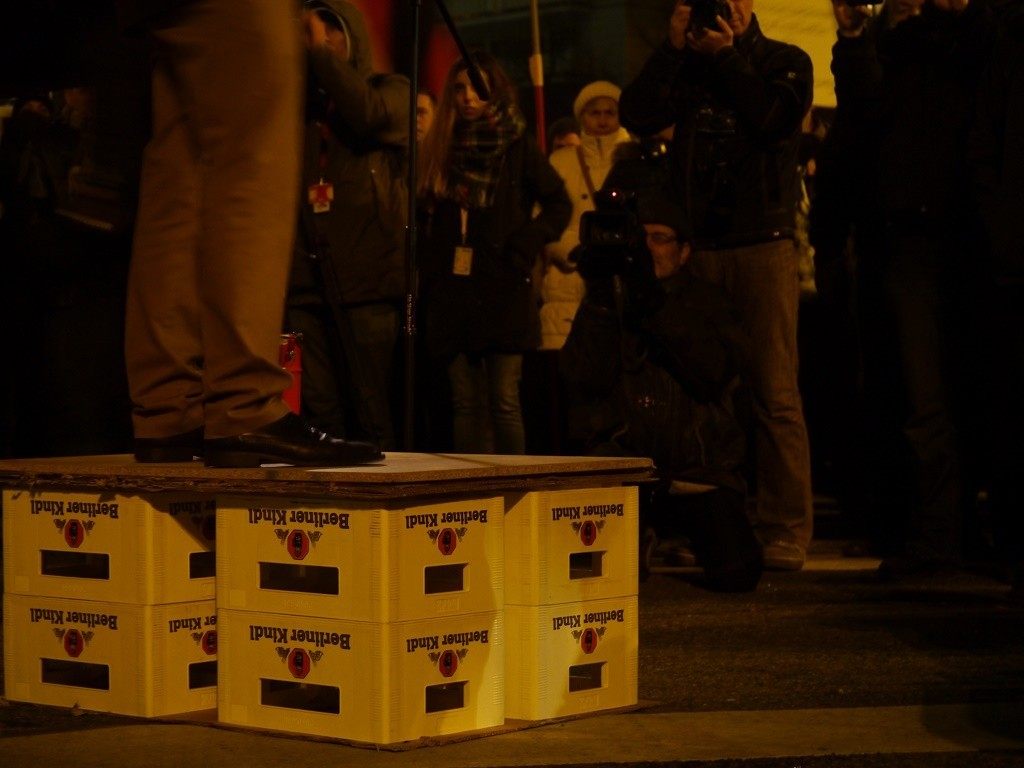 Predictably, the Charlie Hebdo shootings and the murder of four Jewish shoppers in a Kosher deli in France this month features heavily. A speaker asserts that in Berlin, BARGIDA is Charlie too, that they stand firmly against Islamist violence and the craven politicians they see as allowing it to flourish.

“Freiheit”, German for liberty and freedom, is the word of the night, a rallying call against the decision to cancel the Dresden march after an unsubstantiated threat.

After the stroll Breitbart London catches up with the organiser of the BARGIDA rally on the platform of a Berlin subway station where a handful of people have been moved by police. Our meeting is cut short when a train comes into the station loaded with a group of anti-fascists, and police move in again to calm the situation. 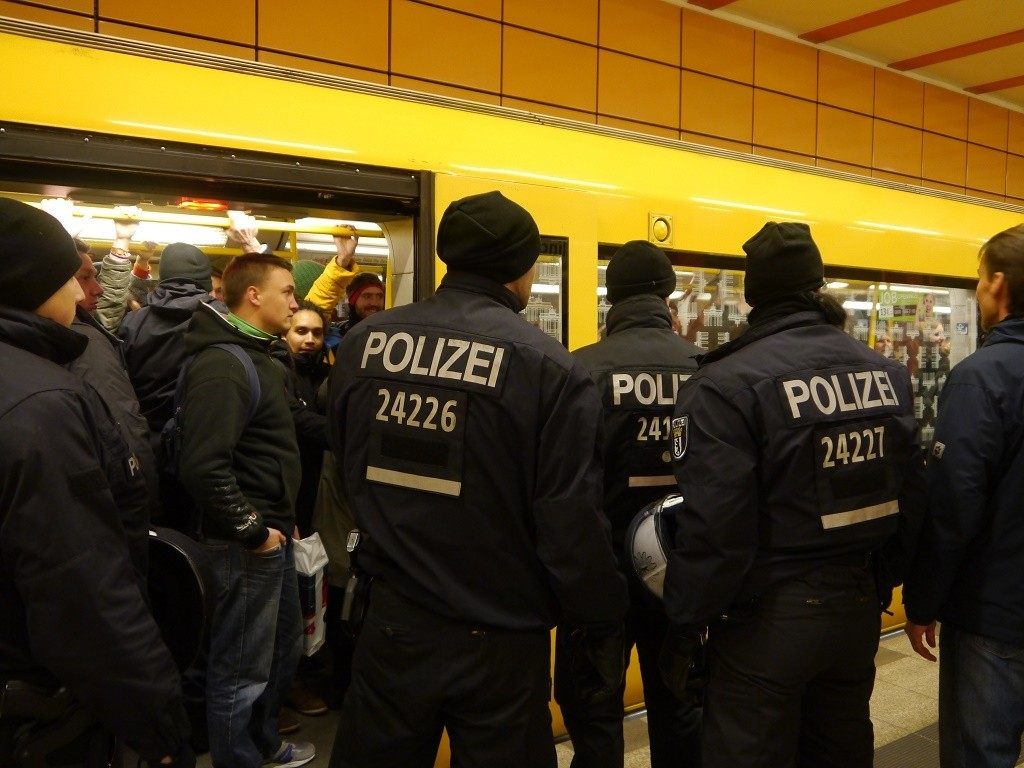 Berlin police keep a group of agitated counter protesters on a train after they unexpectedly pulled into a platform of PEGIDA supporters. Oliver Lane / Breitbart London

Despite that Lutz Bachmann, the founder of the PEGIDA movement is mentioned Seemingly unmoved by the threat against his life he remains dedicated, asking Dresden supporters to travel to Leipzig tomorrow to march there against radical Islam and foreign wars being played out on the streets of Europe.

Breitbart London will be there to bring you the full story.