Fidel Castro is relevant– and alive. This the latest from Cuban state newspaper Granma, which has published a first-person account of a university student’s encounter with the dictator.

In an article titled “Fidel is Out of Sight!” University of Havana student Randy Perdomo García recounts his encounters with the leader of the communist revolution, who handed the island over to his brother, Raúl, in 2008, citing health issues and triggering a seemingly endless cycle of death rumors. The article appears to be a rebuttal to the latest Castro death rumors surfacing in early January, partially as a response to President Obama’s concessions to the Cuban government in December.

Because all of Cuba yearns to know of him and because I also enormously desire to tell it, this is the story of when a young college student in 2015, president of the University Student Federation of the University of Havana, personally conversed with the historic leader of the Cuban revolution.

García commences by recalling a phone conversation with Castro, who reminisces that it has been 70 years since he enrolled at the University of Havana. He asks trivial questions like, “How many chairs are in a classroom at the Physics Department?” This sent García into a paroxysm of tween-ish admiration: “I was speechless, of course, impressed by his infinite curiosity,” he writes of the chairs question.

García then claims he met with Castro personally, and that the former leader was not only alive, but lucid. He mentions that Castro repeatedly claims García looks like José Antonio Echeverría, the leader of the Revolutionary Directorate, a competing anti-Batista group whose members were killed during a siege of the presidential palace.

Here is a side-by-side of García and Echeverría, whom Castro allegedly said, on multiple occasions, looked similar: 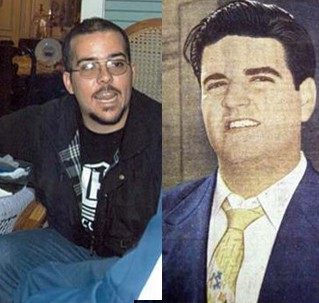 The images of García with Castro and his first-person testimony are the second attempt on Granma‘s part to prove that Castro is not dead. In late January, Castro allegedly penned one of his “Reflections” columns to call on Cubans not to “trust” the American government despite the new concessions on the part of the White House. Castro also allegedly wrote a letter to Diego Armando Maradona, the legendary Argentine soccer player and staunch supporter of a number of Latin America’s most oppressive heads of state.

The new photos can be interpreted as proof that this was not enough to quell the rumors, as well as the admission on García’s part that Cubans “yearn” to know any news about Castro. But they raise another important question: why the fascination with 2015 Fidel Castro–alive or dead? He has not been making major policy decisions within the Cuban government for years, and his death would only consolidate Raúl Castro’s power over the Communist Party. Cynics and longtime observers of Cuban politics–often one and the same–will find it difficult not to argue that the conditions of life for the average Cuban will change little if the government announces that Castro has died. They will lament, also, the spotlight resting on the face of the Revolution’s evil, rather than on the faces of millions of victims of his regime–both those on the island and in the global diaspora.