Fusilier Lee Rigby, drummer and machine gunner of the Royal Regiment of Fusiliers murdered in broad daylight in South-East London by a pair of Islamist terrorists has been honoured in his home town with a bronze memorial.

Standing in the Middleton memorial gardens in Greater Manchester, the cast-bronze drum signifying his military duty was unveiled along side a plaque which read simply “In memory of Fusilier Lee James Rigby, 2nd Batallion Royal Regiment of Fusiliers, 1987-2013, Forever Loved and Remembered”. 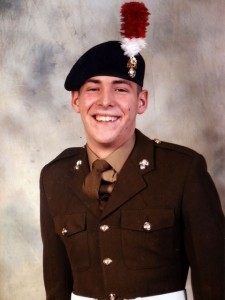 The Daily Mail reports the remarks made at the ceremony, which was attended by Rigby’s family including his widow and son, which were made by Colonel Mike Glover of the Fusiliers. He said: “The afternoon of May 22 2013 Fusilier Lee Rigby, of the Royal Regiment of Fusiliers, paid the ultimate sacrifice when the horror of the battlefield was brought to the streets of Woolwich.

“That day will forever be embedded in our nation’s history and for many here today it will remain forever in our hearts.

“Lee’s death sent shockwaves around the world, especially in Middleton where Lee had grown up.
“As a nation, as a member of his family, as a friend or a fellow Fusilier it is important we do not forget the sacrifice of Lee and those who served the Crown.

“On September 1 2014, Lee Rigby was honoured by the nation at a ceremony in Staffordshire where his name was added to the Armed Forces Memorial at the National Memorial Arboretum but today it is his hometown, his family, his friends, his fellow Fusiliers, at the site of this memorial can reflect upon the tragic loss of a son, a father, a friend and, above all, a Fusilier.

Rigby’s killers, Muslims who heeded the violent call to Jihad of the Islamic Caliphate, were given life sentences after being found guilty in 2014. Michael Adebolajo was sentenced using new stronger sentencing laws which ensure a full-life sentence, while Michael Adebowale was sentenced to a minimum of 45 years.

After attempting to behead Rigby, Adebolajo delivered a lengthy speech to witnesses, which was recorded by a passer-by with a mobile phone. Attempting to justify the murder while his hands were still slick with blood, Adebolajo said: “The only reason we have done this is because Muslims are dying every day. This British soldier is an eye for an eye, a tooth for a tooth”. As he was sentenced to life imprisonment, he shouted the Islamic war-cry “Allahu Akbar” into the court room.