NEW YORK – Thousands of members of the Iranian resistance group the Mujahedin-e-Khalq (MEK), or the People’s Mujahedin Organization of Iran (PMOI), held a rally and put on mock executions at the United Nation’s Dag Hammarskjold Plaza in New York City on Tuesday to protest President Hassan Rouhani’s visit to the U.N. and to shed light on his role in the 1988 massacre of 30,000 political prisoners who were hung, shot and buried in mass graves.

“We’re here in the cause of freedom, which is America’s cause,” Lieberman told the crowd. “But honestly, it is God’s cause. Every person deserves freedom because every person was created by God.” He refuted the Iranian Regime’s claims that they are acting in the name of God and suggested that a government which claims it is doing so would not “take God’s children and put them in Evin Prison and torture them and murder them.” 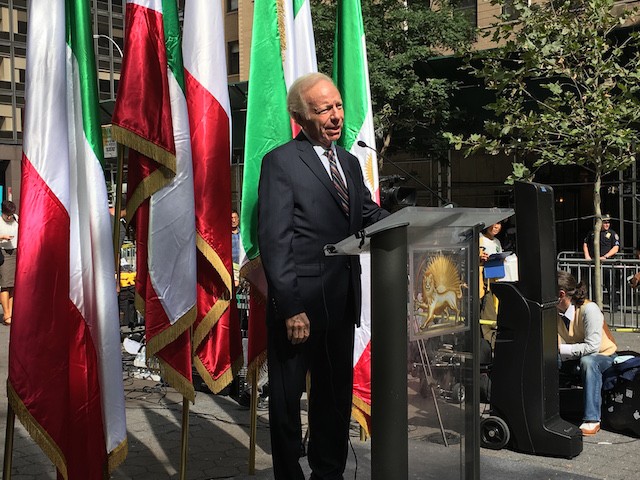 Pastor Abedini told those gathered that he was present at the rally “to celebrate the future for Iran. I don’t pay attention to what’s happening right now. I believe in the future we are going to see an Iran that is going to be changed and people are going to experience the freedom that they are looking for… and I thank all of you people standing here for being a voice for people who don’t have any voice.” He added, “Nothing can stop his plan. God is in control of everything.” 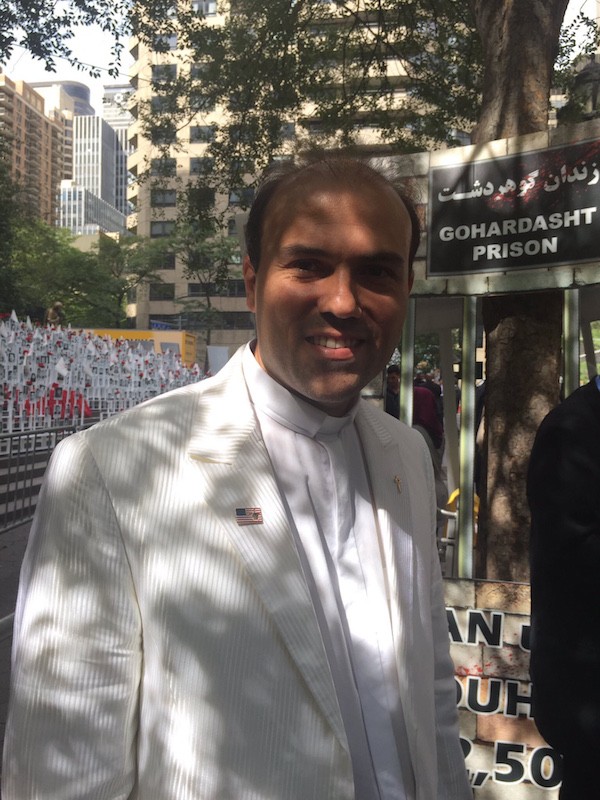 A reenactment of the mass executions of 30,000 political prisoners was orchestrated by the PMOI. Female actors, dressed in prison uniforms, were escorted to their deaths by IRGC guards as two larger-than-life-sized Papier Mâché figures of Iran’s Supreme Leader Ayatollah Ali Khamenei and President Rouhani supervised the act. 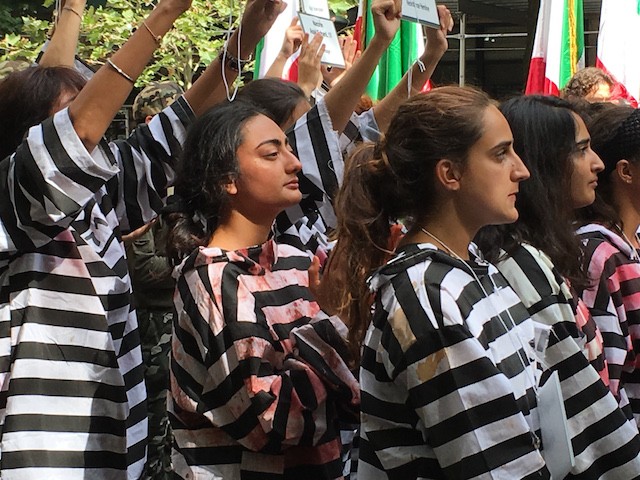 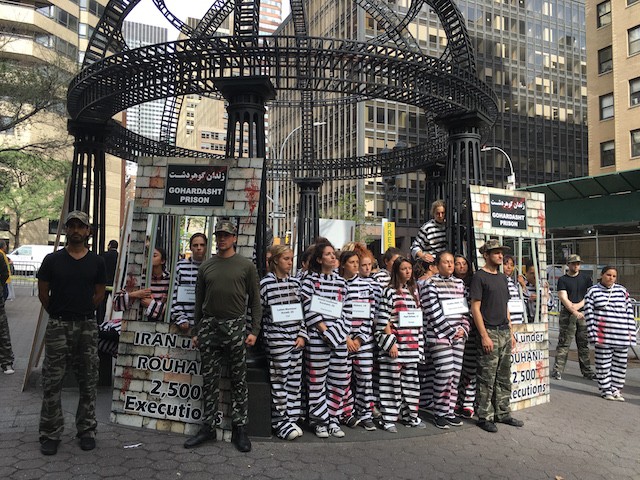 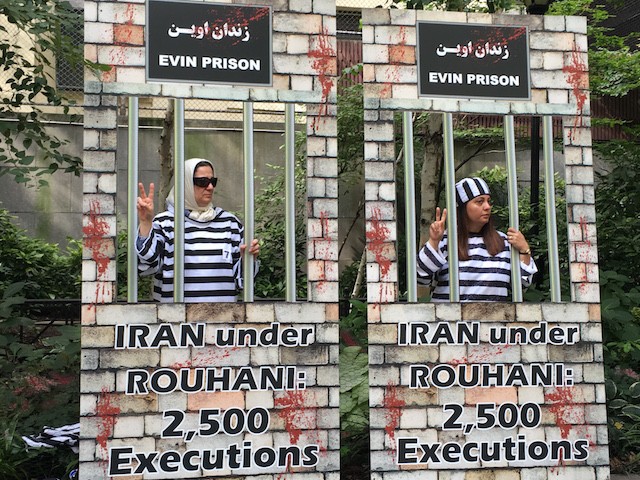 Khamenei was president at the time of these mass killings and Rouhani was the Deputy Commander-in-chief of the Iranian regime’s armed forces, and had served as a member of the regime’s Supreme Defense Council since 1982. At least 50 officials who were involved in the 1988 executions are currently active and serving in the Iranian Regime.

Some of the political prisoners were hung, four at a time, others shot by firing squad. All of the prisoners were buried in mass graves. Most of them were members of the Iranian resistance.

The President-elect of the National Council of Resistance of Iran (NCRI), Maryam Rajavi, was not present for the rally but sent a written statement to all who participated in protesting Rouhani’s visit to the United States.

“Rouhani does not represent the Iranian nation,” Rajavi wrote. “[H]e represents the most vicious enemy of the people of Iran.” She added, “So long as the U.S. admits on its soil the leaders of a regime which it calls the ‘central banker of terrorism,’ and so long as the U.N. receives them at the General Assembly instead of arranging for their international prosecution for committing crimes against humanity, this is tantamount to their standing up to the desire of the Iranian people for freedom and democracy.” 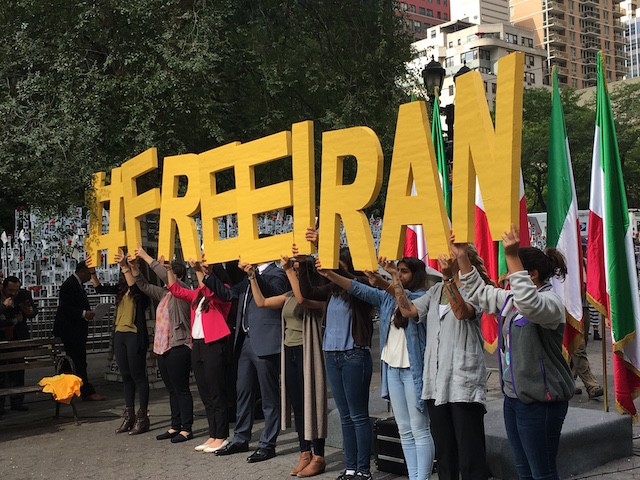 Rouhani addressed the U.N. on Thursday.

“The killing of prisoners is the worst of all war crimes. It has been for hundreds of years,” Sir Geoffrey Robertson told the large crowd. “The prisoner is utterly at the mercy of the state. That is why international law, from the 15th Century, has given special protection to prisoners of war.” 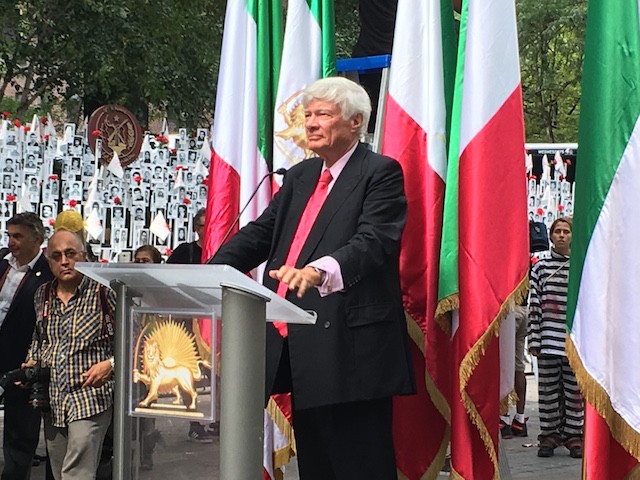 Since World War II, there have been “three heinous and hideous examples” of killing political prisoners, Robertson said. “The first was the Japanese Army that death-marched 7,000 American soldiers to their death in 1946.” He cited the second example as the 1995 Srebrenica massacre in which over 8,000 Muslim men and boys were killed. And then he stated that the third and “worst example” was the 1988 massacre in Iran.”This dreadful act has never been punished, has never even been investigated apart from an investigation that I did at the behest of the Boroumand Foundation a few years ago.”

Sir Robertson also addressed the plight of British-Iranian dual citizen Nazanin Zaghari Ratcliffe, 37, who was arrested along with her infant daughter, Gabriella, during her most recent visit to Iran on April 3. Robertson blasted the British government for doing little to rescue their national from Iran’s prison, suggesting their silence was a result of preventing any interruption in business between the Islamic Republic and the United Kingdom. British Airways recently began doing business with Iran again. 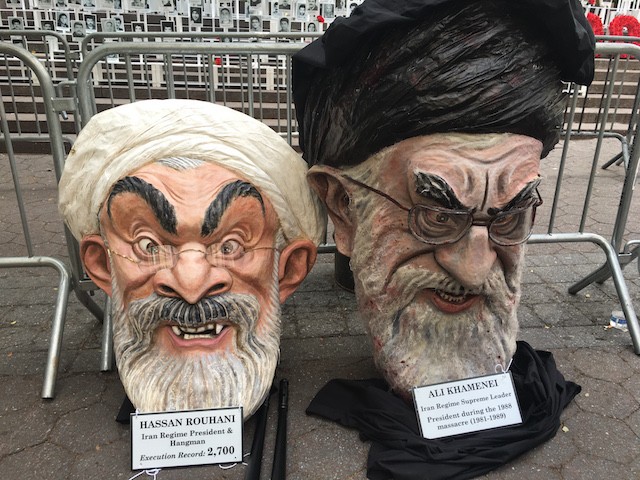 “And why doesn’t Britain protest?” Robertson posited. “This is the problem: That Britain’s cowardly and pathetic government will not sand up to the mullahs, will not [utter] a squeak of protest: No demanding that her husband should be allowed to visit her. No demanding the British Consul should be allowed to visit. Iran is in breach of international law by refusing to allow them,” he said.