The “Venezuela Takeover” (“Toma de Venezuela”), as the opposition dubbed the protests, began Wednesday morning throughout the nation’s largest cities, from western San Cristóbal to the capital, Caracas. Police used tear gas, shot at crowds, and surveillance video revealed severe beatings of protesters caught away from the crowds.

The Argentine newspaper La Nación notes that one Venezuelan police officer died while at least 120 protesters were injured, and 245 individuals arrested.

El Nacional, an anti-Maduro newspaper based in Caracas, published an extensive report detailing violent attacks of protesters in “at least 11 Venezuelan municipalities,” both by official police units and the Chavista gangs known as “colectivos,” who are believed to operate at the government’s behest.

“Protesters reported that police shot at them and arbitrarily detained anyone attempting to photograph or videotape them using their cell phones,” El Nacional reports, “including a journalist from the El Oriental newspaper, whose equipment was confiscated.”

The newspaper add that two headquarters of the opposition party Popular Will – whose leader, Leopoldo López, is considered the nation’s most prominent political prisoner – were attacked and looted. 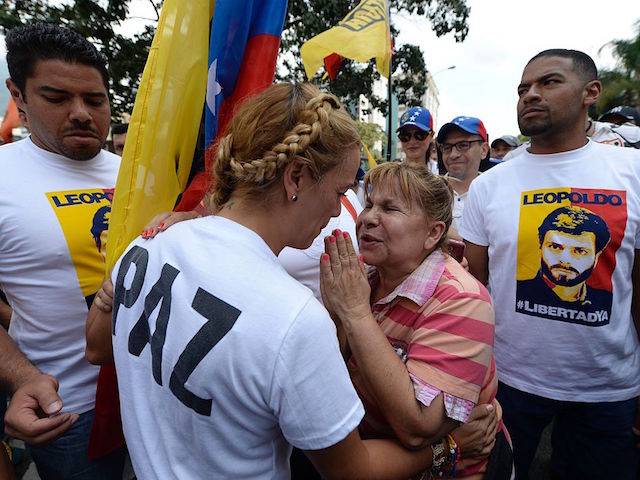 Lilian Tintori (2-L), wife of prominent jailed opposition leader Leopoldo Lopez, listens to a woman during a march against the government of Venezuelan President Nicolas Maduro in the streets of Caracas on October 26, 2016.
FEDERICO PARRA/AFP/Getty Images

Among the more harrowing videos to surface from the protests is that of the beating of Laura Lara, a mother protesting the Maduro government in Maracay, northern Venezuela.

“Seven police officers beat me and my son,” she said after the incident. “My son has been detained. They insulted me. They called me a whore, a bitch, cursed and told me to go home.”

Miranda state governor Henrique Capriles Radonski, who ran twice against Maduro for president, also published a video of a man identified as Junior Ayala being shot at by police. Ayala reportedly lost his eye in the incident. “This is Maduro’s dialogue,” Capriles wrote on Twitter.

Maduro has blamed the violence of his law enforcement officers on American President Barack Obama. “This is Obama lashing out,” he told an audience Wednesday. “He is leaving and he wants to destroy Venezuela. He is like a hurricane. The Right’s maneuver is Obama’s last lashing out before handing over the presidency, the world sees it this way and our people know it is this way.”

The protest is a response to the nation’s electoral commission rejecting a millions-strong petition to put the presidency to a recall vote. The Venezuelan Constitution allows for such a recall measure, led by the opposition in the National Assembly. The electoral commission alleged that the opposition’s signatures were invalid, though it did not provide any evidence for such a measure. 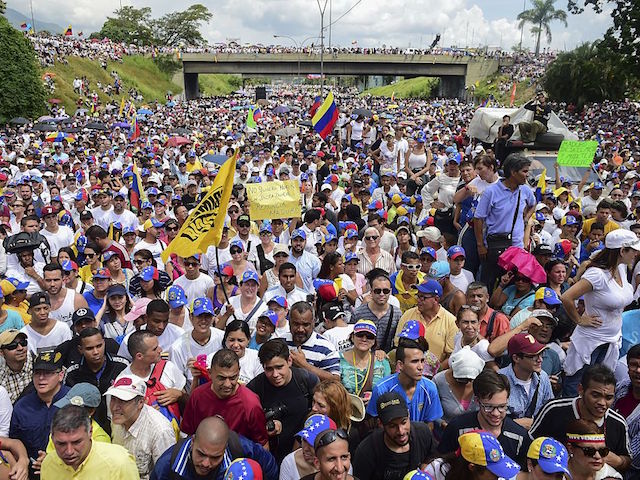 In response, the National Assembly declared that Maduro, by violating the constitution to perpetuate himself in power, had staged a coup. The coup declaration from the nation’s legislature prohibits the armed forces from obeying Maduro. The National Assembly has also summoned Maduro for a November 1 public trial.

In response, Maduro has appealed to the Vatican. Maduro met with Pope Francis on Monday, who has announced that he will mediate talks between the two sides. It is unclear what the two sides would discuss in such a talk, and Capriles and other opposition leaders have insisted that talks are impossible under Maduro abides by the nation’s constitution. National Assembly Leader Jesús Torrealba did meet with a senior Vatican envoy on Monday, however. 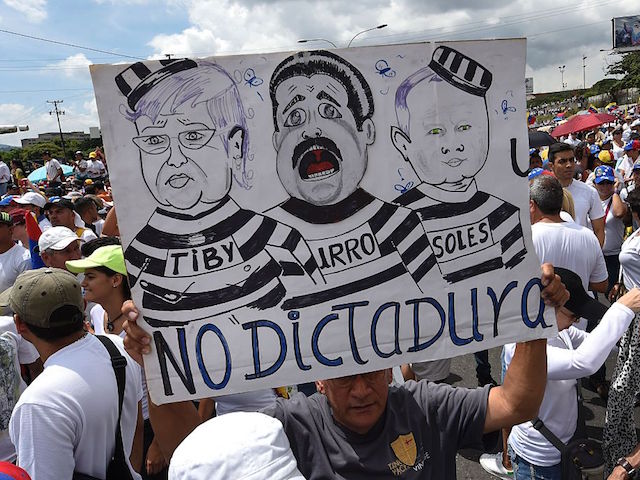