This morning’s key headlines from GenerationalDynamics.com: 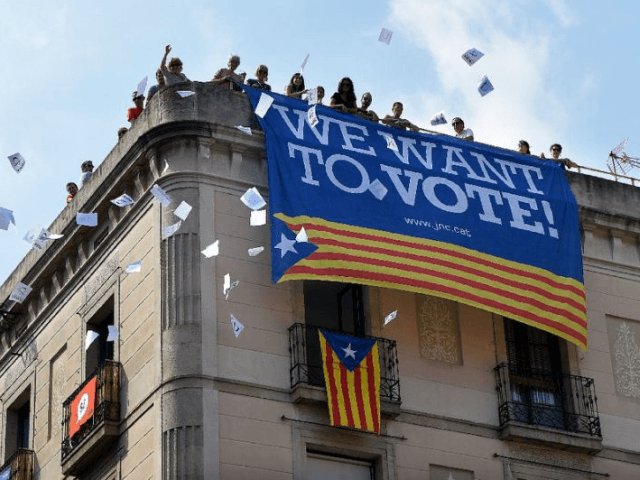 The government of Spain is facing its biggest political crisis in decades, since the wealthy region of Catalonia is demanding independence from Spain, and is planning to hold an independence referendum next week.

Catalonia’s parliament passed a measure in September officially announcing its plan to hold a referendum on October 1. The parliament said that if the referendum passed, then it would declare independence from Spain within 48 hours.

Tens of thousands of Catalans have taken to the streets in Barcelona, protesting the Spanish government and expressing support for the planned vote on Catalan independence.

The Madrid government, backed by Spain’s Constitutional Court, has declared the referendum to be illegal. Spain’s King Felipe and Spain’s prime minister Mariano Rajoy have both publicly called on Catalans not to vote. Earlier this week Madrid began a major crackdown on Catalonia institutions to prevent the referendum from taking place.

On Tuesday, Madrid took to court 700 Catalan mayors for allowing preparations to go ahead.

This was after the police went from building to building, raiding printers, newspaper offices, and private delivery companies, searching for election materials, confiscating vote record forms, ballot boxes, and almost ten million ballot papers, as well as and campaign leaflets.

It’s quite possible that this crackdown will prevent the referendum from being held, although Catalonia official Oriol Junqueras said that there will be a vote, possibly using ordinary sheets of paper as ballot papers.

However, it almost doesn’t matter anymore whether the referendum is held or not. Madrid’s crackdown, which many criticize as an enormous overreaction, has infuriated the Catalans and is leading to continuing anti-Madrid street protests. More than 40,000 people have gathered in Barcelona to protest over the arrests and the intervention of the Spanish government in the Catalan independence vote. Reuters and New Europe and El Periodico (Barcelona) (Trans) and Express (London)

The Madrid government has flooded Catalonia with almost ten thousand police officers, stormed Catalonia’s government buildings, confiscated thousands of ballot papers, and arrested Catalonia government officials. To those with long memories, this looks a lot like the beginnings of policies that led to the Spanish Civil War.

In the 1930s, during Spain’s Second Republic, the government had granted Catalonia a fair amount of autonomy, though there were occasional bloody street fights between Anarchists and Communists. However, that autonomy changed with the Spanish Civil War (1936-39), which was one of the bloodiest wars of the 20th century and a prelude to the much larger World War II.

Generalísimo Francisco Franco’s fascist nationalism, aided by Italy and Germany, led to massive atrocities in Catalonia, with entire villages completely flattened by Benito Mussolini’s Italian air-force and the German Luftwaffe. Franco imprisoned, tortured and executed tens of thousands of Catalan people. At the same time, there were extremely bloody wars between the Anarchists and Communists. The war climaxed with the Battle of Ebro (July to November 1938), in which 15,000 pro-Republic Catalans died, resulting in victory for Franco.

Franco marginalized the Catalans after the war ended, but during the generational Awakening era of the 1950s, Catalan groups were forming underground resistance and opposing Franco. Franco’s death on November 23, 1975, signaled the full beginning of the generational Unraveling era, with calls for renewal of democracy and self-rule in all regions of the country. In 1977, more than one million Catalans marched through the streets of Barcelona and asking for freedom, amnesty, and self-rule. But only limited self-rule was allowed.

Today, Spain is well into a new generational Crisis era, and as the survivors of the last crisis war die off, the fault lines that led to the Spanish Civil War of 1936-39 are reemerging. Catalonia’s demand for an independence referendum, and Madrid’s overreaction and crackdown on Catalonia last week resulted in little or no violence, but they represent a growing renewal of the tensions that separated Catalonia from Madrid in the 1930s. Guardian (London) and Catalonia Votes and This Is Spain