United Nations Secretary-General António Guterres condemned travel bans rapidly imposed in the past week on southern African countries in response to the discovery of a new Chinese coronavirus variant, stating on Monday that he was “deeply concerned” about policies such as that enacted by President Joe Biden.

Guterres’ opposition to travel bans echoes that of the World Health Organization (W.H.O.), a U.N. agency, of the leaders of African countries targeted, and of Joe Biden in 2020.

Guterres did not name Biden personally, as several other countries – most notably those in Western Europe, the Middle East, and Japan – enacted similar policies. Japan documented its first case of the new Chinese coronavirus variant, dubbed “Omicron,” on Tuesday, less than 24 hours after imposing its travel ban.

“I am now deeply concerned about the isolation of southern African countries due to new [Chinese coronavirus] travel restrictions,” Guterres wrote in a statement on Monday. “I appeal to all governments to consider repeated testing for travelers, together with other appropriate and truly effective measures, with the objective of avoiding the risk of transmission so as to allow for travel and economic engagement.”

Guterres also applauded South Africa for being the first country to identify Omicron and appeared to demand more global vaccine donations for the region.

“As I and others have long warned, low vaccine rates are a breeding ground for variants,” Guterres wrote. “The people of Africa cannot be blamed for the immorally low level of vaccinations available in Africa – and they should not be penalized for identifying and sharing crucial science and health information with the world.”

While a South African laboratory first fully identified Omicron, the nation’s government insists it is not a native South African variant and evidence suggests the first cases occurred in Botswana. The government of Botswana also denied that it is the origin of Omicron, accusing four foreign diplomats of bringing the virus into the country.

“We are concerned by attempts to stigmatize the variant and label a country where it was first detected as its country of origin,” Botswana Health Minister Edwin Dikoloti said on Sunday, refusing to identify the countries that the allegedly infected diplomats came from.
“That aspect of saying it originates from Botswana is out,” Dikoloti nonetheless insisted.

“We are deeply disappointed by the decision of several countries to prohibit travel from a number of Southern African countries following the identification of the Omicron variant,” Ramaphosa said in a speech on Sunday. 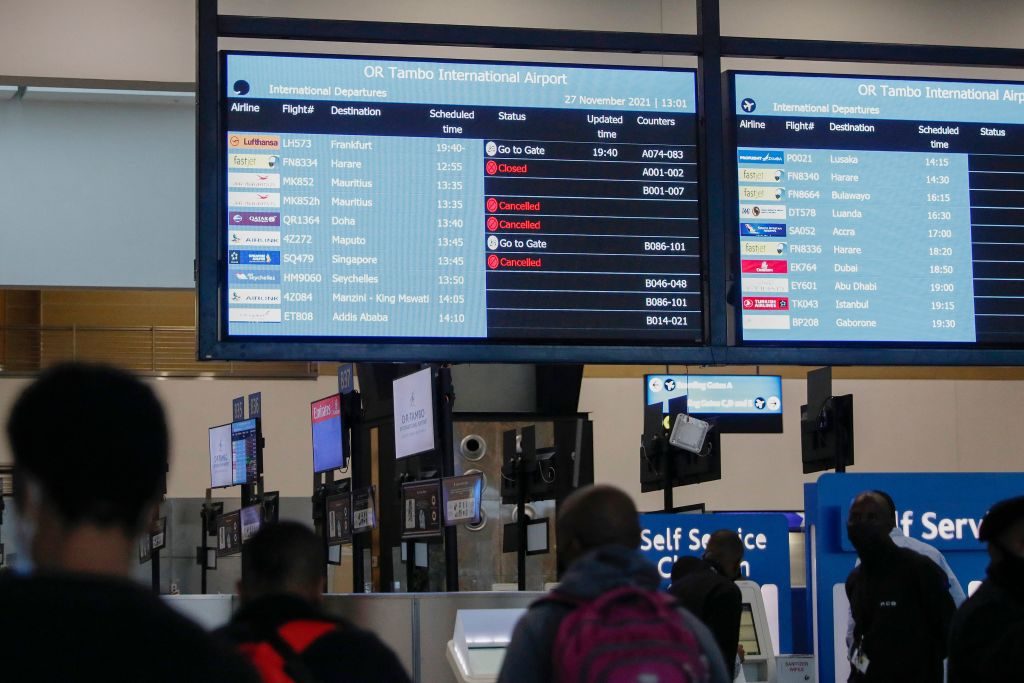 Travellers walk near an electronic flight notice board displaying cancelled flights at OR Tambo International Airport in Johannesburg on November 27, 2021, after several countries banned flights from South Africa following the discovery of a new Covid-19 variant Omicron. (PHILL MAGAKOE/AFP via Getty)

“This is a clear and completely unjustified departure from the commitment that many of these countries made at the meeting of G20 countries in Rome last month. They pledged at that meeting to restart international travel in a safe and orderly manner.”

“These restrictions are unjustified and unfairly discriminate against our country and our Southern African sister countries,” Ramaphosa continued, urging Biden and others to “urgently reverse” travel bans.

“The prohibition of travel is not informed by science, nor will it be effective in preventing the spread of this variant,” Ramaphosa asserted, citing the W.H.O.’s opposition to such bans.

Lazarus Chakwera, the president of Malawi, accused Biden and other leaders enacting travel bans of “Afrophobia” in a Facebook post on Sunday.

“[Chinese coronavirus] measures must be based on science, not Afrophobia,” Chakwera wrote, referring specifically to the travel bans by the United States and the West as “uncalled for.”

The W.H.O. regional director for Africa, Matshidiso Moeti, said in a statement this week that travel bans “place a heavy burden on lives and livelihoods” and urged “scientifically based” policies, instead.

Prior to becoming president, Biden appeared to agree with these sentiments. Following Trump’s initial ban on travel from China in early 2020 to slow the spread of Chinese coronavirus, Biden ranted on Twitter that the policy reflected “hysteria, xenophobia, and fear-mongering.” Biden later accused Trump of enacting an “African Ban” explicitly “designed to make it harder for black and brown people to immigrate to the United States.”

Biden has not offered any clarity on the difference between his ban on African nation travel and Trump’s “African Ban” [sic] at press time.

The World Health Organization labeled Omicron a “variant of concern” last week based on the identification of significantly more mutations in its system than in previous variants. Scientists appear to know little about how it actually affects infected people, another fact that the W.H.O. identified as a cause for caution.

Dr. Angelique Coetzee, a doctor who has treated South African Omicron patients, told the U.K. Telegraph this week that she observed extremely mild symptoms in her patients, including children.

“We had one very interesting case, a kid, about six years old, with a temperature and a very high pulse rate, and I wondered if I should admit her. But when I followed up two days later, she was so much better,” Coetzee explained. She identified extreme fatigue as the most common symptom.

Coetzee warned that the virus may affect older people or those with chronic health problems more severely.