In a report today on the growing wealth gap between members of Congress and the constituents they represent, the New York Times credited Breitbart News editor Peter Schweizer as being partly responsible for having ignited “renewed attention” to banning elected officials from enriching themselves by using material, nonpublic information when making private investments. 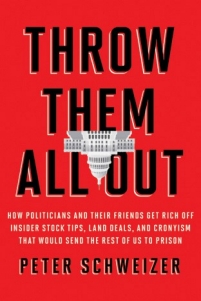 While concerns go back decades about lawmakers trading on confidential information, the issue drew renewed attention with a new book on the topic, “Throw Them All Out” by Peter Schweizer, and a “60 Minutes” report in November. Both linked high-level briefings that Congressional leaders received on the 2008 financial crisis and on health care to their purchase and sale of certain stocks.

Members insisted that they never traded on information that was not public, and some Congressional leaders pointed out that their investments were in blind trusts managed by professional advisers. Nonetheless, the publicity led some 90 members of Congress to call anew for a ban on insider trading.

Citing an article in yesterday’s Washington Post, the report notes that from 2004 to 2010, the median net worth of members of Congress jumped 15 percent, even as the net worth of the richest 10 percent of Americans remained virtually unchanged. Median net worth for all Americans fared far worse, dropping 8 percent. And between 1984 and 2009, the median wealth of House members grew two and a half times (in inflation-adjusted dollars), whereas the average American family’s fell slightly.

Is the rapid and anomalous wealth expansion by members of Congress the result of insider trading? That’s a judgment only the voters can make.

Still, even the New York Times agrees, the time has come to enact this “sensible” and “overdue” measure to end congressional insider trading.