Last weekend, police report that a Muslim man from Detroit stabbed two bystanders at a bus stop after he asked if they were Muslims and they said no.

In Tuesday’s coverage the Washington Post featured a headline with the word “Muslim” in it—but one that obscured the story’s meaning entirely. 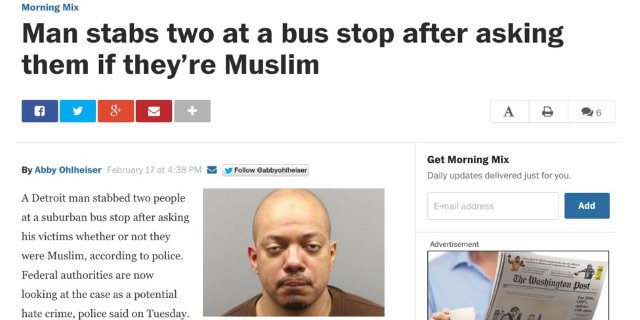 On Tuesday afternoon, the Post published a story titled, “Man stabs two at a bus stop after asking them if they’re Muslim.” The story correctly informed Post readers that police arrested Terrence Lavaron Thomas after last Saturday’s attack. Southfield Police Chief Eric Hawkins said that Thomas was “engaged in conversation” with two people at a bus stop outside Detroit. During the conversation Thomas “asked some of the folks there if they were Muslims.”

Police say that when the bystanders told him they weren’t Muslims, he “was not happy with that answer.” He then pulled out a “3-inch folding knife” and allegedly attacked them.

One of the victims was stabbed five times. Neither victim had life-threatening injuries.

But while the Post’s story does contain the alleged non-Muslim targeting which is key to the story, it has not been reflected in the article’s headline or lead paragraph—even after the paper updated the headline to address outrage on social media. It now reads, “Police: Man stabs two after asking about religious beliefs.”

The Post did append a notice that informs readers that its headline “has been updated,” but there is no explanation of why the change was made.

Few other news sources seemed to have any compunction over listing “Muslim” in headlines or in their stories, though one local Michigan paper didn’t seem to find the religious title of any interest at all and left “Muslim” out of both its story and headline.

MLive.com, a large Michigan media company, reported on the suspect’s question to the victims—but did not include the fact that the alleged attack began after they said they were not Muslims.