With its support of the Baghdad government and the wrong rebels in Syria, the US Administration is doing the unthinkable: strengthening the spread of Tehran’s control in the Middle East and at the same time also helping the Sunni extremists to grow in power.

The American strategy against Global Jihad is having the opposite effect of that intended. And even key government officials are beginning to openly admit the failure of our policies.

The Director of National Intelligence, retired General James Clapper, recently testified that the terrorist threat is worse than at any other time in history and Major General Michael Nagata, responsible for planning our response to the civil war in Syria, has stated that the Islamic State is now more dangerous than Al Qaeda.

Seemingly just to prove the broader point about the global appeal of Jihad against the “infidel,” ISIS has just accepted the African terrorist group Boko Haram’s pledge of allegiance, meaning that the Sunni Caliphate established last year in Mosul by Abu Bakr al Baghdadi now officially covers any territory that Boko Haram controls in Nigeria.

The spread of ISIS influence is not just about territorial control, it is about the staggering success of its international call to holy war, with an estimated 19,000 westerners having left their homes to wage jihad. The visual below, based upon a British think-tank’s unclassified research, shows just how international a recruitment wave this is, with almost every country on the map sending recruits to fight in just Syria alone. 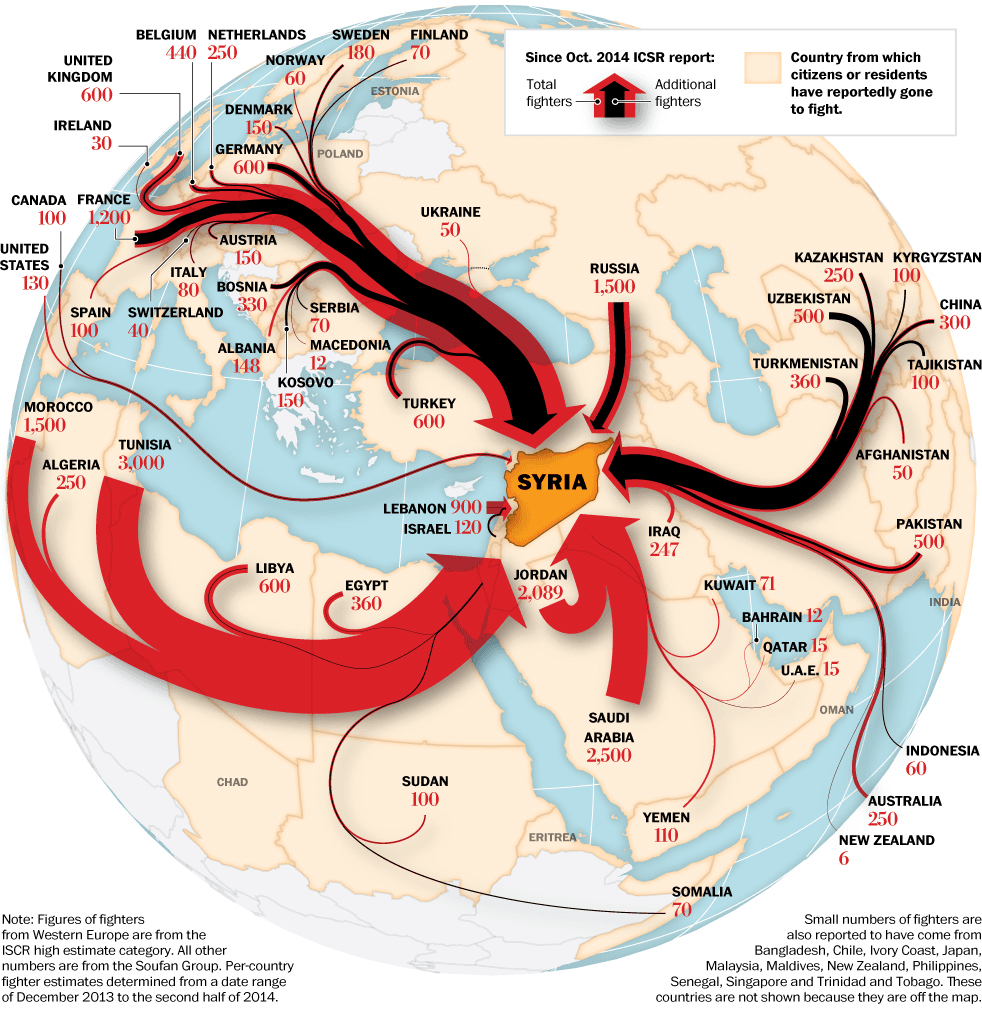 Given all the evidence, even the most influential liberal commentators and pundits have admitted the failure of the Obama strategy against “Violent Extremism.” Writing recently in the New York Times, Thomas Friedman stated: “When you don’t call things by their real name, you always get in trouble. And this administration, so fearful of being accused of Islamophobia, is refusing to make any link to radical Islam” and added that as a nation “We’ve entered the theater of the absurd.” The left wing Atlantic magazine even dedicated 11,000 words to an article proving the Islamic roots of ISIS and the religious justification for its violence.

Fourteen years after the September 11th attacks and half way through President Obama’s second term, how can we explain a failure so egregious that even the pillars of the liberal left are finally prepared to call it out? The key mistakes upon which the current strategy is built are:

Each one of these premises is flawed and is undermining US national interests as well as the safety and stability of our regional allies.

Firstly, in the history of modern military air power, since the first hand grenade was thrown out of a biplane over a century ago, the number of insurgencies like ISIS that have been defeated by airstrikes alone is zero. Insurgents are defined by their capability to hold ground. This is what separates a rag-tag terrorist group from a real threat like the Islamic State. As a result, their control of territory by ground forces can only be countered by other ground forces contesting the same space and eventually destroying or pushing them out. This is not a call for the deployment of US troops, but for the recognition of the fact that only a ground response– for example, made up of Iraqi, Kurdish, Jordanian and Egyptian units– can defeat ISIS. (According to my sources even Ben Rhodes, the Deputy National Security Adviser, has admitted that US airstrikes are not working because we do not have the intelligence on the ground to know what to hit.) Any such response on the ground will not happen without US leadership and support, and in this President Sisi of Egypt will play the pivotal role even if the Obama Administration doesn’t like the former General. Without Egypt’s military might, the Islamic State will continue to grow and threaten the US even more than it already does.

By bringing Iran into our plans against ISIS, we are in fact strengthening a rival brand of Jihad. The war today in Syria and Iraq is not about the corruption of the former Maliki government in Baghdad or the human rights record of President Assad of Syria. It is about whose version of Islam will dominate the region. One only has to read or listen to Abu Bakr al Baghdadi’s sermon from the Grand Mosque Mosul in which he declared the Islamic State. The speech is about reestablishing the theocratic empire of Islam – the Caliphate – under Sunni control. ISIS even posted their real intent on social media: 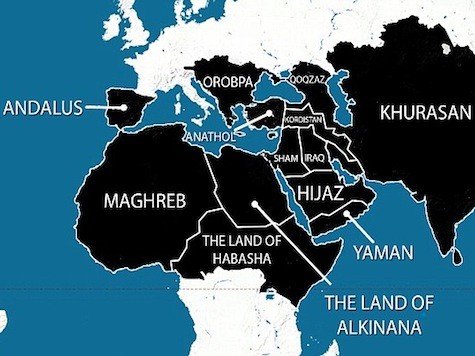 Iran, on the other hand, also believes in the need to re-establish the Caliphate, but under its control as a Shia empire, and the wars in Iraq, Syria, and Yemen, must be understood as the re-ignition of a 1,400 year old argument about who should control Islam. In fact, that is how the Sunni and Shia division of Islam occurred after the death of Mohammad, and those are the stakes for Tehran. The fact that the mullahs now control five regional capitals– Tehran, Baghdad, Beirut, Damascus, and now Sanaa– means that despite ISIS’s growth, the Shia extremists are winning. The White House’s belief that Tehran is an altruistic foe of Sunni jihadists like ISIS is driven by shortsightedness and a lack of understanding of the historic battle that is in play, and will simply strengthen the Shia proto-Caliphate, eventually even to include Tehran’s acquisition of nuclear weapons should the nascent deal the President is pushing come to fruition.

By contrast, in Syria, since 2011, the administration has been driven by its pathological hatred of Assad and the belief that, despite his enjoying the support of both Beijing and Moscow, Assad can be removed through the support of indigenous rebels such as the Free Syria Army. Speaking to the few true moderates that have organizational capability in theater, the sad truth is that we have chosen the wrong rebels. The more organized and loudest rebel groups are not the moderates but the true jihadists, some of whom have in fact formally allied themselves with ISIS. (This is not just a failure of the White House, but also the Republicans in Congress, especially Senator John McCain, who has the uncanny knack of supporting those who would kill us after they have killed all the Shia in the region).

Most disturbing of all is the Administrations willful dismissal of the real center of gravity in this war: the ideology of Global Jihadism. With its constant refrain that “upstream causes” such as poverty and lack of education are the real reason for terrorist violence, the White House displays a total ignorance of the groups we face today, from Al Qaeda to ISIS, from the Fort Hood shooter to the Tsarnaev brothers who killed and maimed hundreds at the Boston bombing.

As political correctness has been forced onto the practice of national security in general and counterterrorism specifically, we see absurd conclusions being drawn and fantastical policies being implemented. The recent international summit on “Combating Violent Extremism” hosted by the President and the White House assiduously preached repeatedly that religion has nothing to do with ISIS or Al Qaeda and concluded with this visual that all we need is more community outreach: 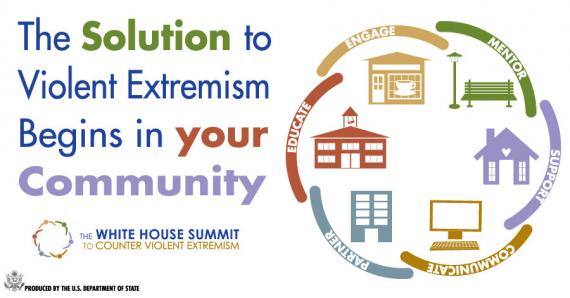 Of course, if poverty and lack of education were the drivers of terrorist violence, then half of the population of India would be terrorists. But they aren’t. Why? Because terrorist violence does not happen in a vacuum. It requires a spark, a narrative that acts as the justification to violence and the catalyst to mobilize people to do horrific acts against their fellow man. That ideology can be secular – for example, the communist terrorism of the Weather Underground led by Bernadine Dohrn and Bill Ayers – or religious, such as ISIS. How else, for example, can one understand why the Islamic state would behead the 21 Coptic Christians whose murder they filmed on the shores of Libya, but instead burn alive the Jordanian pilot Lieutenant Mu’ath al-Kaseasbeh? These decisions were not random.

For the jihadists of ISIS, the Copts are kuffar, infidels, and as the Koran teaches, the infidel must be “smitten on the neck” (e.g. Koran Ch. 47 V. 4). However, Lt. Kaseasbeh was a Muslim, a Jordanian Sunni, who in taking arms up against the Caliphate made himself an “apostate” and as a result he had to be killed not as an infidel but as one who committed the sin of leaving Islam and therefore, he was to be treated as if he were in hell, i.e. burnt alive. Religion is therefore so important to this war that it even defines the way in which the terrorists will kill you should you be captured.

Today, the Global Jihad has two brands. It is a war of the “Sunni Coke” versus the “Shia Pepsi” which also targets the local minorities caught in the middle, most especially the ancient Christians of the region.(Incredibly, the Parliament of the European Union seems to understand the threat better than the White House based upon the resolution it just issued against ISIS.) The powers that be have allowed politics and ideology to distort and pervert the practice of national security to such an extent that, incredibly, we are not only helping the Sunni Jihadists, but also the Shia extremists of Iran. Whichever side wins the war for the crown of the Caliph is irrelevant, since once their immediate foe is vanquished we, the infidel West, will be their next target.

Sebastian Gorka Ph.D. is the Major General Matthew C. Horner Chair of Military Theory at the Marine Corps University. You can see his briefing from the Global Counterterrorism Summit on Why ISIS is Much More Dangerous than Al Qaeda here and follow him on Twitter at: @SebGorka.