The federal government issued 680,000 green cards to migrants from majority-Muslim countries from 2009 to 2013, according to the Senate Subcommittee on Immigration and the National Interest.

Federal data from the Department of Homeland Security shows that the U.S. issued the 680,000 green cards to migrants from Pakistan, Iraq, Bangladesh, Iran, Egypt, Somalia, Uzbekistan, Turkey, Morocco, Jordan, Albania, Lebanon, Yemen, Indonesia, Syria, Sudan, and Afghanistan, among others, according to a Senate report issued in November. The individuals receiving green cards — which establish permanent residency in the U.S. — also include refugees. Immigrants from Muslim-run nations are the fastest-growing migrant bloc in the U.S.

The subcommittee notes — assuming no change in visa policy — the U.S. will issue another 680,000 green cards to migrants from majority-Muslim nations in the coming five years. 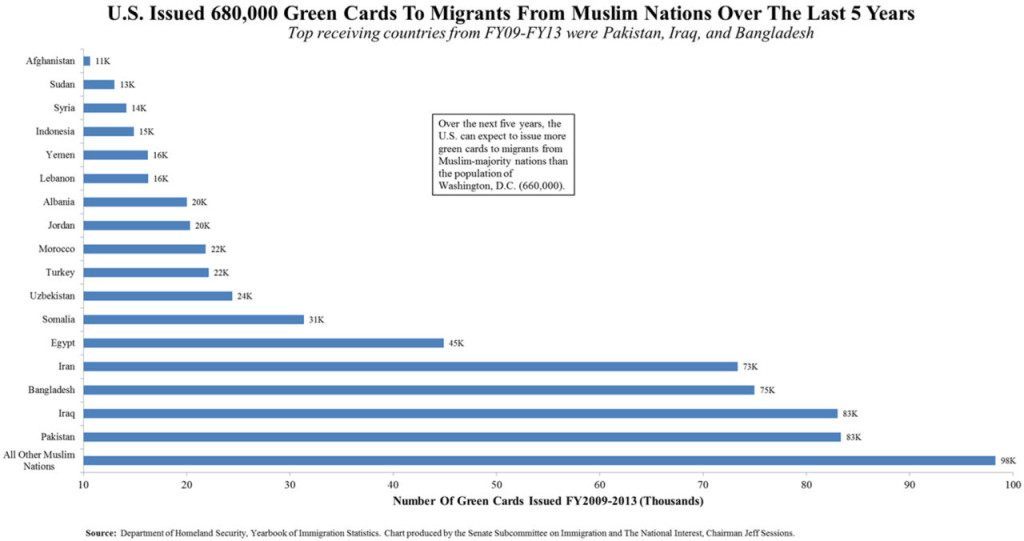 “The numbers could be higher still: Census Bureau data shows migration from the Middle East to be one of the fastest-growing categories,” the subcommittee’s analysis reads.

“Additionally, if left in place, the President’s refugee plan would substantially boost the annual number of migrants from this region admitted to the U.S. who, in turn, would be able to petition for their relatives to migrate to the U.S. in the future. Refugee and asylee admissions from Iraq, Somalia, and Iran alone contributed 124,000 individuals from FY09-FY13.”

The subcommittee added additional context to its chart:

According to the U.S. Census Bureau, the foreign-born population in the United States is at a record 41.3 million.  One-quarter of the U.S. population is now either foreign-born or has foreign-born parents.  The Census Bureau projects the percentage of the population born outside the country will soon pass the highest percentage ever recorded and continue rising to new all-time records never before witnessed – unless Congress passes a law to reduce green card allotments.  Without such changes, the Census Bureau projects that, for each coming year the total number of immigrants in the United States will increase, the annual rate of immigrant admissions will increase, and the foreign-born share of the population will increase.  Pew polling data shows that 83% of the public (across all parties) opposes this baseline and believes the level of immigration should either be frozen or reduced.  By a nearly 10-1 margin, Americans of all backgrounds are united in their shared belief that companies with positions to fill should raise wages instead of bringing in new lower-wage labor from abroad.  And yet, despite this, the Senate’s Gang of Eight bill would have tripled the issuance of green cards over the next decade, and this year’s I-Squared bill would substantially increase both low-wage guest worker admissions and green card allotments – all on top of the existing record-breaking and unprecedented growth in future immigration.

In 1970, fewer than 1 in 21 U.S. residents were foreign-born.  Today, is it nearly 1 in 7 and rising.  This enormous growth in the foreign labor supply – driven by green cards – has held down pay and salaries.  Wages today are lower than they were in 1973.

Following the numerically-smaller immigration wave from 1880 through 1920, Congress reduced immigration for the next half-century.  This migratory pause helped usher in a period of rapid wage growth for both America’s immigrant and US-born workers who were able to rise together into an expanding middle class.

Visa changes enacted in 1965 then helped produce a record wave of new immigration.  Congress is now in the midst of stacking another five-decade record-breaking immigration wave on top of this last five-decade wave – producing 100 years of continuous record-breaking immigration.  Pew projects that this next immigration wave will add another 103 million to the U.S. population (new immigrant arrivals and their future children) by 2065 – or the population equivalent of 25 cities of Los Angeles.

To curb this extreme level of future immigration growth, as a supermajority of voters wish, will require Congress to take up and pass a bill to reduce the number of visas issued on autopilot each and every year.