A Planned Parenthood political advocacy executive changed her identification on Twitter after she slammed Democrat presidential candidate Hillary Clinton for referring to a “fetus” as an “unborn child” and saying she is open to restrictions on abortion later in pregnancy.

Arellano suggests in another tweet Monday that Clinton has a “condescending” tone toward young people.

Not to mention her condescending comment abt feeling sorry for young people bc we apparently don't do our research https://t.co/qtIVsmTlCP

Before sending those Tweets, her profile identified Arellano as working for Planned Parenthood Illinois Action: 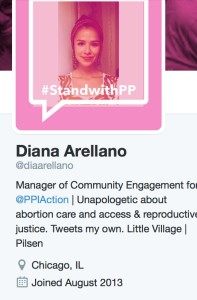 My position is in line with Roe v. Wade, that women have a constitutional right to make these moment intimate and personal and difficult decisions based on their conscience, their faith, their family, their doctor. And that it is something that really goes to the core of privacy. And I want to maintain that constitutional protection. Under Roe v. Wade as you know there is room for reasonable kinds of restrictions after a certain point in time. I think the life, the health of the mother are clear. And those should be included even as one moves on in pregnancy. So I have been — I’ve had the same position for many years.

When asked by Todd “when or if” an unborn child has constitutional rights, Clinton responded:

Well, under our laws currently, that is not something that exists. The unborn person doesn’t have constitutional rights. Now, that doesn’t mean that we don’t do everything we possibly can in the vast majority of instances to, you know, help a mother who is carrying a child and wants to make sure that child will be healthy, to have appropriate medical support. It doesn’t mean that, you know, don’t do everything possible to try to fulfill your obligations. But it does not include sacrificing the woman’s right to make decisions. And I think that’s an important distinction that under Roe v. Wade we’ve had refined under our Constitution.

Arellano’s tweets are especially noteworthy since Planned Parenthood and its allies in the establishment abortion industry have endorsed Clinton in the primary – a first in the history of the abortion business.

Clinton’s comments come as Planned Parenthood CEO Cecile Richards campaigns for the Democrat candidate in Wisconsin in advance of the Tuesday primary.

“This is sort of the pinnacle of everything we’ve fought for all our lives,” Richards said about electing Clinton, referring to her as “a woman who has been standing for women her entire life.”

The abortion industry thrives on dehumanizing the unborn child for fear of turning more people against the procedure. Planned Parenthood and its allies in the abortion lobby even deny the science of ultrasound technology as they try to fend off any state legislation that requires women to view an ultrasound of their unborn baby prior to making the final decision to abort.

In addition, the specific term “person” is a legal concept that includes rights and statuses that the law protects, including protection of a person’s life under the laws against homicide. Pro-choice intellectuals have long said that even if an unborn child is a “life,” it is not yet a “person.”

Guidelines issued by the International Planned Parenthood Federation discourage pro-choice advocates from using terms such as “abort a child,” instead recommending “more accurate/appropriate” alternatives such as “end a pregnancy” or “have an abortion.”

“‘Abort a child’ is medically inaccurate, as the fetus is not yet a child,” the guide reads…

From the person who uses her daughter's baby bump as a campaign prop https://t.co/zD1wUAtsF3

“Although Hillary Clinton is first and foremost a politician striving furiously for the highest office in the land, she is also a rational human being and an affectionate grandmother,” said The Catholic Association’s Dr. Grazie Pozo Christie in a statement sent to Breitbart News, adding:

As such, she angered her powerful financial backers at Planned Parenthood by referring to an unborn baby as a “person” and a “child.” The abortion mega-provider is appalled that Clinton, grateful recipient of their lavish campaign contributions, should forget that their first and best corporate strategy to increase profits is dehumanizing the fetus. Of course, no one, not even Clinton, can close their eyes to the scientific fact that a fetus is anything but a young human person, and abortion the end of his or her short life.

Secretary Clinton’s comment that an “unborn person” doesn’t have constitutional rights was strikingly callous. My message to Mrs. Clinton is — it’s an unborn child. The analytical coldness with which she dismissed rights of unborn children reveals a type of hardened core that shocks the conscience. Further, abortion restrictions are in place precisely because an unborn child does have constitutional rights. Secretary Clinton, a trained attorney, should know the law. Her comment reveals a mindset that lacks any compassion for unborn children and may signal an intention to use executive action to block even minimal protections of life at its most vulnerable stage.