President Donald Trump’s immigration push has gained an 8 percent cut on the number of foreigners who illegally overstayed their tourist, business or temporary work visas during 2017, says a new report by the Department of Homeland Security.

In fiscal 2016 which ends October 1, 2016, an estimated 1.25 percent of 50.4 million visitors overstayed their visas, allowing 628,799 overstays to join the nation’s population of roughly 11 million illegal migrants.

Also, the DHS ensured that many of the overstays returned home after several months.

It is unclear if the 2017 overstays are departing faster than the 2016 overstays.

Some of those overstays are children being flown into the United States by illegal immigrants who had arrived earlier, often by illegally crossing the Texas border.

Most illegal immigrants smuggle themselves across the Texas or California borders, but roughly 40 percent of the nation’s population of illegal immigrants are people who overstayed their legal visas. Over time, they disappear into the U.S. communities to take jobs. Many go home after a few years, but many overstays remain, have children and try to win green cards and citizenship via the routine “Adjustment of Status” procedures.

The DHS  agency is trying to reduce overstays by automated tracking of the arrival and exit of identified visitors. That process was manded by after the 9/11 atrocity in 2001 but was stalled by business-first deputies working for Presidents George W. Bush and Barack Obama. Over time, this automated process will allow the agency to contact people who have overstayed their visas and warn them to leave before they are legally penalized.

The most likely people to overstay their visas are the relatively few visitors from poor countries, such as Chad, the Solomon Islands or Angola.

However, students are the most likely category of visitor to overstay, largely because they can easily blend into the U.S. society. The report said roughly 69,000 foreign students overstayed their visas in 2017:

For nonimmigrants who entered on a student or exchange visitor visa (F, M, or J visa), DHS has determined there were 1,662,369 students and exchange visitors scheduled to complete their program in the United States. However, 4.15 percent stayed beyond the authorized window for departure at the end of their program

The Mexican overstay rate is artificially low because the report only covers people who arrive by sea and air, not by land. The report said: 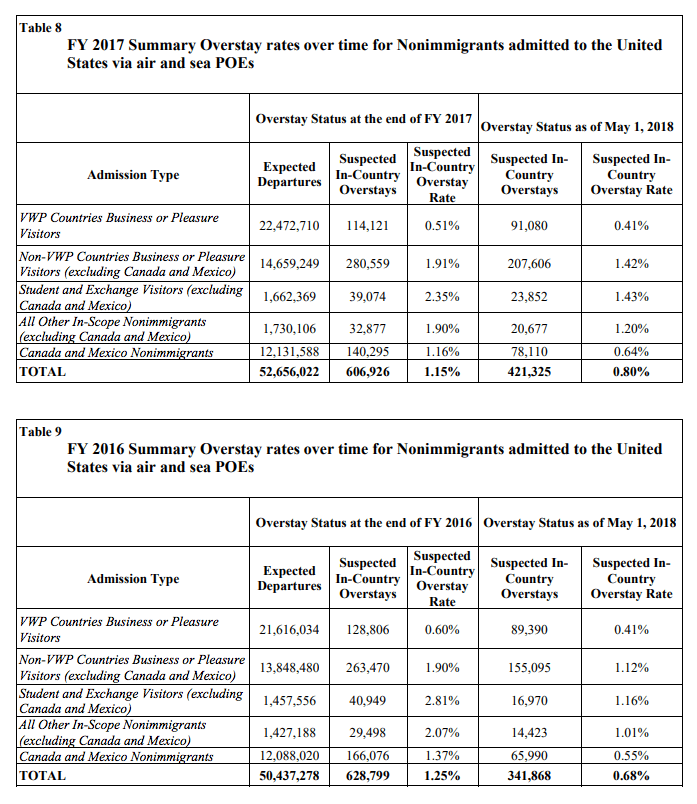