Moreover, rising blue-collar wages are likely to spur yet more economic growth as Americans spend their higher wages, said the report. “Wage growth has picked up sharply in the bottom half of the wage distribution … The solid wage growth suggests a relatively optimistic outlook on consumption.”

The four percent growth was gained by everyone who earned up to $45 per hour. People who earn more than $45 per hour, however, saw a salary gain of just two percent.

If the Hire American trend continues until the 2020 election, Trump will have delivered a historic wage increase of roughly 14 percent to more than 100 million American voters by election day. 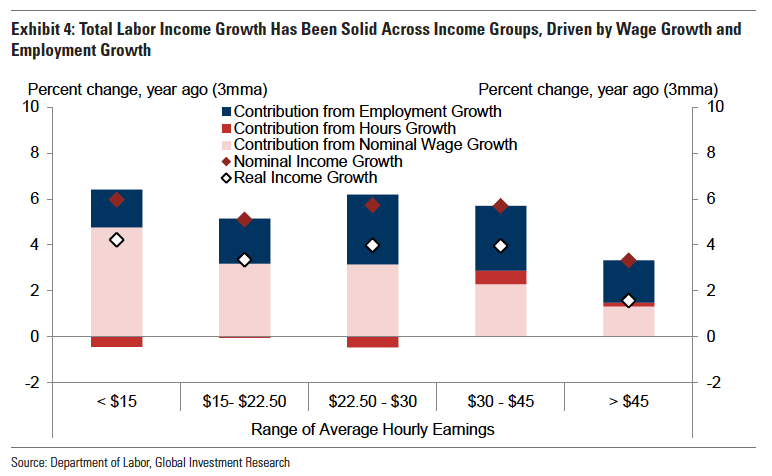 The Goldman Sachs report did not explain why salaries grew slowly for college graduate Americans who earn more than $45 per hour or $94,000 a year. However, the report suggested that high-level salaries rise and fall with corporate profits — but that explanation is undermined by the low salaries amid the massive scale of corporate profits in 2018.

One reason why higher salaries stalled amid massive profits is likely the hidden army of at least 1.5 million foreign temporary workers who have been flooded into the U.S. job market for college graduates.

These visa workers enter U.S. jobs via the H-1B, L-1, B-1, OPT, CPT, and TN guest worker programs, and they work for very low wages in the hope of getting U.S. green cards and citizenship. In fact, some of the L-1 and OPT workers accept minimum wages and live in packed rooms for many years in the hope of escaping the restrictive cultures and limited economic opportunities in India and China.

The foreign graduates’ willingness to accept poverty wages — and to often move from job to job — ensures they are frequently hired by brand name U.S. companies. The major U.S. companies hide their use of cheap foreign graduates by subcontracting the jobs to various U.S.-based companies which specialize in importing and hiring Indian, Chinese, and Filipino graduates. This shell game ensures U.S. graduates lose starter jobs, mid-career promotions, and salaries because they are often discarded when middle managers pick employees for the next contract.

This vast army of foreign contingent workers is mostly used in software, computer, accounting, healthcare, and education jobs, but they are also hired for jobs in the fashion, design, and architecture fields. The scale of outsourcing business in cities and states is tracked by several websites, including MyVisaJobs.com and SAITJ.org.

Worse, Congress is currently considering a plan that would dramatically expand job outsourcing to graduates from China, India, and the Phillippines.

The bill’s advocates say it will not raise the annual number of green cards, but will just lift onerous “country caps” that ensure that Indian visa workers can now only get 23,000 of the 140,000 green cards which are annually given to foreign employees of U.S. companies. Advocates also say the extra green cards will end the backlog of 300,000 Indians working and waiting in the line for green cards.

But a greater Indian share of the 140,000 green cards may encourage more Indians to take more U.S jobs from more U.S. graduates, according to a 2018 report by the Congressional Research Service. The promise of “shorter wait times for [green cards] might actually incentivize greater numbers of nationals from India, China, and the Philippines to seek employment-based [green card] status,” a CRS report warned legislators. “If that were to occur, the reduction in the number of approved [green card] petitions pending might be short-lived,” allowing the backlog to grow even longer, said the December 2018 report.

The Senate co-sponsors of the outsourcing bill include:

The House sponsors are cited here, and they include:

Business groups are also backing additional legislation to dramatically loosen the tight labor market that is driving up Americans ‘wages.

On March 13, for example, business groups applauded draft legislation that would provide green cards to at least two million DACA illegal aliens — “Dreamers” — and other temporary residents in the United States.

FWD.us, a lobbying group which was founded by investors led by Facebook’s Mark Zuckerberg, tweeted:

“We are thankful for @RepRoybalAllard, @NydiaVelazquez & @RepYvetteClarke for leading this effort to protect Dreamers. Their actions help move the debate forward and we support their efforts to move this legislation forward in a bipartisan fashion.” Thank you for your leadership! pic.twitter.com/aCYBgM1yPb

It is no surprise they usually just assert this and don’t offer factual backup!

In 2019, because of catch-and-release rules mandated by Congress and the courts, the federal government also will likely release at least 350,000 Central American laborers into the U.S. job market, even as at least 500,000 more migrants sneak past U.S. border defenses or overstay their visas.

Overall, in 2019, the U.S. government will allow at least two million new foreign workers into the United States to compete for the starter jobs sought by the latest wave of four million U.S. graduates. The new migrants also undermine the 24 million other Americans and the roughly three million legal immigrants who have joined the workforce since 2014.

This federal policy of using legal and illegal migration to boost economic growth for investors shifts enormous wealth from young employees towards older investors by flooding the market with cheap white-collar and blue-collar foreign labor.

We must be honest with young people that the only way to become successful in this new world is to become elite at something (whatever it is—sports, music, medicine, tech, banking, etc.) And that is where our government’s efforts should be singularly focused—skill development

Immigration also destabilizes politics, and it steers investment and wealth away from towns in Heartland states because coastal investors can more easily hire and supervise the large immigrant populations who prefer to live in coastal cities.