New York officials are pressuring the city’s 200,000 cabbies and hired drivers to publicly question the sex of their customers.

“Ask the passenger what their pronoun is,” says an email sent by the “Office of Inclusion” at the city’s Taxi & Limousine Commission. The email said:

Using someone’s preferred pronoun is a simple way to show respect. Ask the passenger what their pronoun is. Do not assume someone’s pronoun because of their appearance or name on the app. … Introduce yourself and share your pronouns. … If you make a mistake using a pronoun, be sure to apologize.

The “Inclusive Language Tips” are intended to raise the social status of people who claim to have switched sexes.

But they also reduce the status of taxicab drivers by pressuring them to submit to the transgender ideology’s jarring claim that men are entitled to be treated as women once they declare themselves to be women.

The rules also prod millions of passengers to accept the ideology’s claim that people can change their sex by merely changing their “gender identity,” regardless of their body or demeanor.

The instructions also suggest that drivers can ignore the obvious evidence of each passenger’s male or female sex and, instead, impose the transgender pronouns on customers who do not claim to be transgender: “Ask the passenger what their pronoun is … If you do not want to ask, you can … use the gender-neutral pronoun such as they or ze.”

For at least 100 years, taxi drivers have had the ability, the public trust, and the legal freedom to make their own judgments about the sex, pronouns, and titles of their passengers, regardless of the drivers’ wealth, education, or social status. This personal authority has had its own checks and balances, including the prospect of tips for good judgment, tact, and politeness. The interaction was made easy in the United States partly because cabbies and other Americans were under no pressure to use foreign titles other than “sir” for men and “ma’am” for women.

But the new “Tips” — which are not regulations or laws — apply to drivers regardless of their prior status. Many of the drivers are religiously observant or have had training in science. Seventy-one percent of cabbies and drivers are immigrants, including many who have their civic rules shaped by Islam or Hinduism:

The tips are not new policy; they are just suggestions, not binding rules, according to Rebecca Harshbarger, a spokeswoman for the regulator, the Taxi & Limousine Commission, which licenses the industry.

In 2016, the New York City Commission on Human Rights issued legal guidance to employers, landlords, businesses and other professionals to use preferred pronouns, and that “refusal to use a transgender employee’s preferred name, pronoun, or title may constitute unlawful gender-based harassment.” 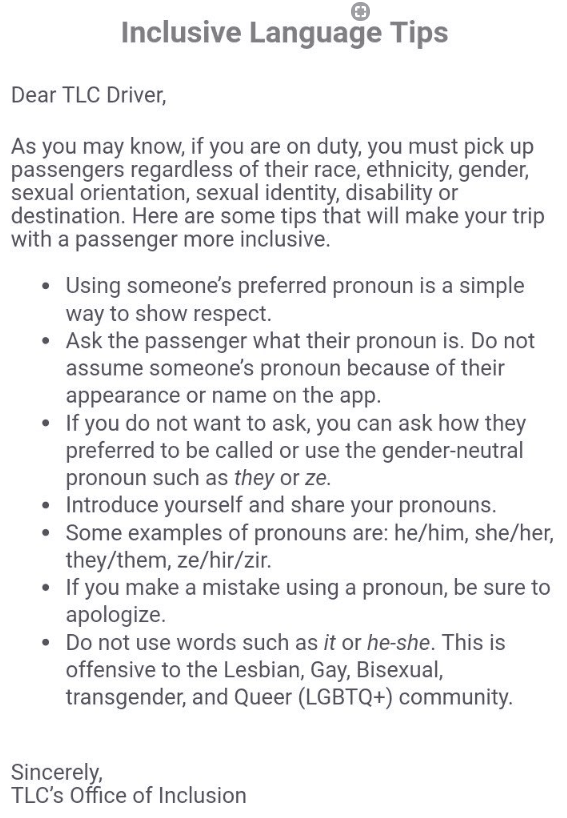 Breitbart News has extensively covered the aggressive campaigns to redefine sex-related pronouns and nouns — such as “man” and “woman” — so progressive elites can rewrite Americans’ civic rules as they seek to expand divide-and-rule diversity.

In general, the established press has submitted to this political campaign to change the meaning of fundamental language terms.

But the vast majority of Americans want the federal and state governments to protect the evolved language and the laws that help ordinary people manage their two-sex society of equal, complementary, and very different men and women, girls, and boys.

In general, the transgender ideology says a person’s legal and civic recognition as a man or a woman is determined by their “gender identity,” not by their biology.

The transgender advocates want to impose their ideology on Americans by establishing “transgender rights” laws. Those rights would require the Department of Justice to penalize individuals and groups who insist that biology determines each person’s male or female status — and also shapes peoples’ likely political, civic, and personal priorities.

Multiple polls show that most Americans reasonably wish to help and comfort people who think they are a member of the opposite sex. But those polls also show that Americans reject the transgender ideology’s claim that people’s legal sex is determined by their feeling of “gender identity,” not by biology. A U.K. survey shows a similar mix of sympathy for people who say they are transgender alongside lopsided opposition to the ideology.

The transgender movement is diverse, so its different factions have competing goals and priorities. It includes sexual liberationists, progressives, feminists who wish to blur distinctions between the two sexes, and people who glamorize the differences between the two sexes. It includes high-profile children, people who are trying to live as members of the opposite sex, troubled teenage girls trying to flee womanhood, and people trying to “detransition” back to their sex.

It also includes men who demand sex from lesbians, masculine autogynephiles who say they are entitled to women’s rights, and alpha males who insist they are the natural leaders of women.

The progressive push to bend Americans’ attitudes and their male-and-female civic society around the idea of “gender identity” has already attacked and cracked many popular social rules. Those rules help Americans manage cooperation and competition among and between complementary, different, and equal men and women.

Transgender groups want women to be redefined as "womxn" — all the better to blur the inescapable biological & physiological distinctions between the two binary, different, complementary & equal sexes. #pronounwarshttps://t.co/9DUC8Owvyx