Dozens of fully vaccinated people in New Jersey have died of the Chinese coronavirus, according to the state’s Department of Health.

Gov. Phil Murphy (D) announced Monday that vaccines in New Jersey were proving to be 99.9 percent effective in the Garden State, reporting 84 breakthrough hospitalizations and 31 deaths among the vaccinated. But this week, a state health official confirmed that 49 people who were fully vaccinated have died of the virus as of July 12. More than half of those had underlying health conditions, Donna Leusner, a spokeswoman for the state Department of Health, told NJ.com. It remains unclear how many fatalities, if any, are connected to nursing homes, but all of them occurred in people over the age of 50. 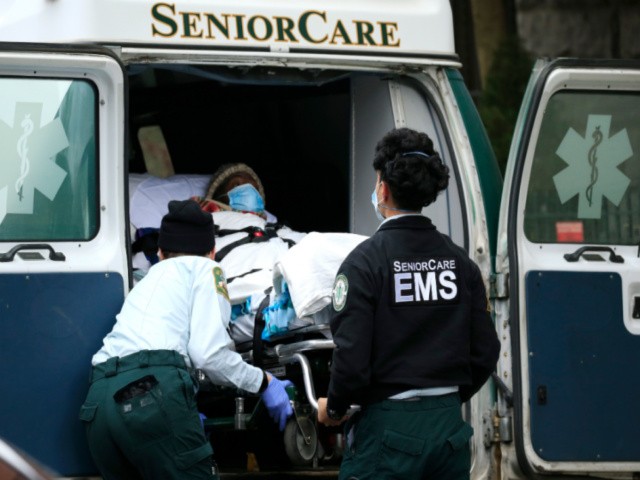 Emergency Medical Service workers unload a patient out of their ambulance at the Cobble Hill Health Center on April 18, 2020 in the Cobble Hill neighborhood of the Brooklyn borough of New York City. The nursing home has had at least 55 COVID-19 reported deaths (Photo by Justin Heiman/Getty Images).

State communicable disease service medical director Ed Lifshitz put the fatalities in perspective, reiterating that the data shows the vaccines to be “99.999% effective in preventing deaths due to COIVD-19.”

“It is important to point out that 49 deaths due to COVID-19 among 4.8 million fully vaccinated state residents is slightly greater than one in 100,000 fully vaccinated individuals,” Lifshitz said.

The news comes as vaccine hesitancy comes to the spotlight as public health officials urge all eligible Americans to get vaccinated. Nearly half of those who are not vaccinated cite concerns over expedited vaccine development, as well as worries over safety and adverse side effects.

Last month, the Centers for Disease Control and Prevention (CDC) recognized a link between mRNA vaccines and the development of heart inflammation conditions, primarily in younger men. This month, the Food and Drug Administration (FDA) added a warning label to the single-dose Johnson & Johnson vaccine over links to a rare neurological condition: Guillain-Barré syndrome.

“Reports of adverse events following use of the Janssen COVID-19 Vaccine under emergency use authorization suggest an increased risk of Guillain-Barré syndrome during the 42 days following vaccination,” the updated fact sheet reads.

None of the vaccines in the United States — Pfizer, Moderna, or Johnson & Johnson — have received full FDA approval, operating under Emergency Use Authorization (EUA). Though it remains highly unpopular among Americans, some public health experts believe vaccination mandates will become more likely if the FDA approves the vaccines.