In a lengthy piece exploring the ever-expanding movement of fluid sexual identities, a report claims that lesbians are facing criticism from transgender activists for not wanting to have relationships with biological men who consider themselves “transgender women.”

“There’s a common argument that they try and use that goes ‘What if you met a woman in a bar and she’s really beautiful and you got on really well and you went home and you discovered that she has a penis? Would you just not be interested?'” a woman identified in a BBC report as Jennie said.

“Yes, because even if someone seems attractive at first you can go off them. I just don’t possess the capacity to be sexually attracted to people who are biologically male, regardless of how they identify,” Jennie said.

The author of the BBC piece said, “Several people got in touch with me to say there was a ‘huge problem’ for lesbians, who were being pressured to ‘accept the idea that a penis can be a female sex organ.'”

Lesbians are being pressured to sleep with transwomen. They are told they are bigoted and wierd if they don’t find people with penises attractive. The trans movement is reviving homophobia, says @jo_bartoschhttps://t.co/W0bM9d2OPa

Apparently, this is unacceptable to transgender individuals and the people who advocate for their mainstream acceptance.

“Angela C. Wild is co-founder of Get The L Out, whose members believe the rights of lesbians are being ignored by much of the current LGBT movement,” the BBC reported. “She and her fellow activists have demonstrated at Pride marches in the UK, where they have faced opposition. Pride in London accused the group of ‘bigotry, ignorance and hate.’”

“Lesbians are still extremely scared to speak because they think they won’t be believed, because the trans ideology is so silencing everywhere,” said Wild, who reported that in a survey she took of 80 women 56 percent reported being pressured or coerced to accept a trans woman as a sexual partner.

The BBC report implied that “transgender women” are attracted to women:

Debbie Hayton, a science teacher who transitioned in 2012 and writes about trans issues, worries some people transition without realising how hard it will be to form relationships.

Although there is currently little data on the sexual orientation of trans women, she believes most are female-attracted because they are biologically male and most males are attracted to women.

“So when they [trans women] are trying to find partners, when lesbian women say ‘we want women’, and heterosexual women say they want a heterosexual man, that leaves trans women isolated from relationships, and possibly feeling very let down by society, angry, upset and feeling that the world is out to get them,” Hayton said. 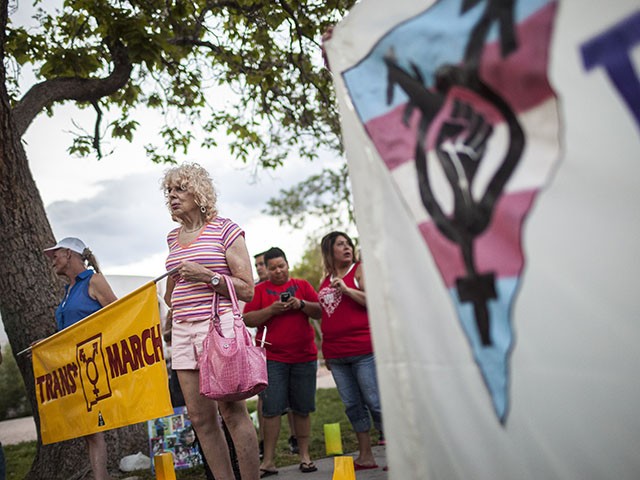 In this May 29, 2014 photo, Denee Mallon, second from left, takes part in the Trans March to Morningside Park in Albuquerque, NM. (AP Photo/Craig Fritz)

The BBC reported on a group that wants to address the pressure on lesbians:

A new group – LGB Alliance – has been formed partly in response to Stonewall’s change of focus, by people who believe the interests of LGB people are being left behind.

“It’s fair to say that I didn’t expect to have to fight for these rights again, the rights of people whose sexual orientation is towards people of the same sex,” said co-founder Bev Jackson, who also co-founded the UK Gay Liberation Front in 1970. “We sort of thought that battle had been won and it’s quite frightening and quite horrifying that we have to fight that battle again.”

The BBC report continued, “LGB Alliance says it is particularly concerned about younger and therefore more vulnerable lesbians being pressured into relationships with trans women.”

“It’s very disturbing that you find people saying ‘It doesn’t happen, nobody pressures anybody to go to bed with anybody else’, but we know this is not the case,” Jackson said. “We know a minority, but still a sizeable minority of trans women, do pressure lesbians to go out with them and have sex with them and it’s a very disturbing phenomenon.”