Overall crime across the city increased by ten percent and violent crime rose 20 percent, though murders decreased by 25 percent. The violent crime rate was driven largely by an increase in aggravated assaults (up 24 percent) and robberies (up 18 percent), the report found.

Seattle Mayor Bruce Harrell addressed the report at a Friday press conference and said the police department has been grappling with a staffing crisis and is short nearly 350 officers, KIRO7 reported. The report’s release comes after Seattle voted not once, but twice, to defund its police department, which further exacerbated its staffing shortages. According to the crime report, 911 response times have suffered as a result of the shortage — priority one median response time increased to 7.5 minutes, and the average response time increased to 10.5 minutes.

“Both stats are approaching a historic 10-year high,” the report states. 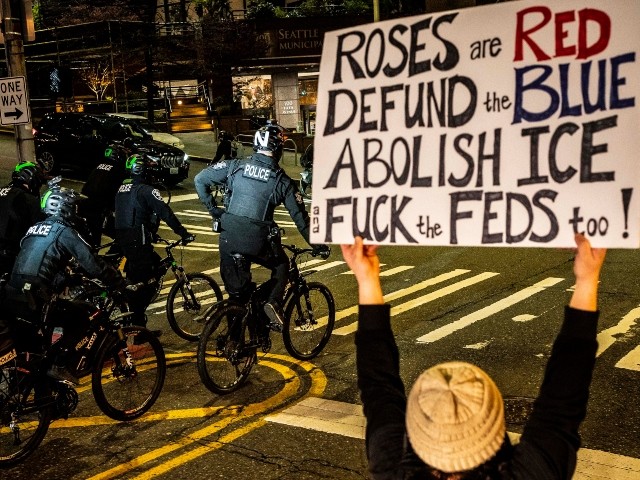 Police patrol by bicycle during a march to protest the death of Daunte Wright on April 12, 2021, in Seattle, Washington. (Photo by David Ryder/Getty Images)

Additionally, Seattle saw a ten-year high in shootings and incidents of shots fired, increasing 40 percent from 2021. A hotspot map of shooting incidents in the crime report a lot of activity near the Capitol Hill neighborhood, which was the site of the infamous “Capitol Hill Autonomous Zone” (CHAZ) set up during the 2020 Black Lives Matter riots. The three neighborhoods with the largest increase in incidents were Lake City, Brighton/Dunlap in South Seattle, and the Chinatown-International District. Overall, there were 612 criminal shootings and shots fired citywide in 2021, up 175 from the previous year.