The nation’s Democratic labor secretary is urging Republicans and Democrats to import more workers for jobs throughout the U.S. economy, even as millions of Americans remain on the sidelines of the U.S. economy.

“Go talk to businesses in your communities, privately, and ask them what they want: Every single company is going to say we need immigration reform,” Labor Secretary Marty Walsh told the House Appropriations subcommittee on May 17, adding:

Big companies need it, small companies need it, people need it. We need more workers in this country. We’re a country that that constantly depends on immigrant workers. We always have. My parents were two of those workers that came to this country. We’re a country that if we want to continue to move forward as a country, we need to figure out some immigration laws and get some reform.

“It’s a complete betrayal of the people that he is supposed to be prioritizing in in that position,” responded Rob Law, regulatory policy chief at the Center for Immigration Studies. He added:

To be a loyal member of the Democrat Party means that you must wholeheartedly endorse amnesty and large-scale immigration, and that the labor concerns of any Americans are are secondary if they are even on on your [legal] radar.

In sharp contrast, President Donald Trump’s last labor secretary implemented plans to prevent blue-collar and white-collar Americans from being replaced by imported visa workers. But the pro-worker reforms adopted by Eugene Scalia were quickly discarded by Biden’s deputies in 2021. Those deputies are also hiding the companies that hire foreign graduates via the open-ended Optional Practical Training program.

Since about 2012, unions have largely abandoned their public efforts to prevent foreign workers from crossing the line into the union of 50 states. Still, there is much closed-door opposition to labor migration in the Democratic Party.

Biden’s workforce of legal, illegal, and quasi-legal migrants is replacing millions of working-age Americans who have dropped out of the labor force since 2000.

At least two million migrants have arrived since January 2020 by legal and illegal routes. Their inflow is helping to reinflate the post-1990s Cheap Labor Bubble and to lower wages by roughly three percent since Biden’s inauguration.

The inflow ensures that companies face little or no pressure to recruit — or train — the population of at least 10 million American men who have fallen out of the economy in a high-migration, low-wage economy.

Also, data presented by the Federal Reserve Bank of St. Louis shows that the Labor Force Participation Rate by men and women is just 62.5 percent, That rate is far below the 67 percent seen in 2000, and below the 63 percent seen in 2016. Each percentage drop means roughly 1.5 million Americans are pushed out of the workforce. 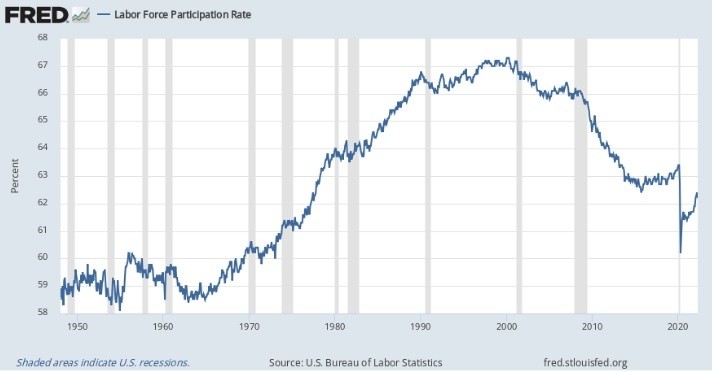 The participation rate quickly nudged up to 63.5 percent under President Donald Trump’s low-migration economy, before the coronavirus crash pushed millions out of the economy. The rate has since climbed amid massive government spending and is about one percent below Trump’s early-2020 level.

In April, Biden’s border chief allowed 118,000 migrants to cross the southern border into the United States. Many others arrived legally or sneaked across the border.

The declining participation rate is partly caused by inflation’s impact on wages, according to Rep. Kevin Brady (R-TX), the top  Republican on the House Ways and Means Committee.

“People are going to work and it looks like they’re getting higher wages, but they’re buying less,” Brady told Tony Perkins at the Family Research Council on May 11. He continued:

The people who are staying away from work are the prime-age workers, the ones we love, [age] 24 to about 54 years age. That’s the one you want in your company, and they’re staying away I think because inflation is eating so much of what they earn … People are making the decision of “Why should I work? It’s just easier to make ends meet if I don’t.” And until we get rid of some of those barriers to work, our businesses are going to struggle.

In the committee hearing, Walsh admitted that his call for more migrant workers is unpopular: “I don’t know if I’m going to get myself in trouble on this, but the reality of the situation is we need immigration reform in the United States of America.”

Walsh also admitted that his call for replacement workers is bad politics: “We could do something about it: I know nothing’s going to happen about it [in Congress]– I’ll be completely honest with you, and I think it’s really unfortunate.”

But Walsh also suggested that his call for a replacement workforce is mostly about the Democrats’ desire for more imported voters, not business demands for more jobs and wages. “We need real immigration reform in this country for a pathway to citizenship,” he said.

Walsh also did not explain how his calls for more immigration would undercut his repeated promises to train more Americans, such as former inmates. He told Rep. Bonnie Watson-Coleman (D-NJ):

Listen, there are people in our prison system right now that are not counted as potential future workers in America. And if we set the right training programs, and the right job opportunities, and meet people where they’re at, we can create a whole new pathway … [to] a good living.

Companies claim shortages of untrained American workers “to create this presumption that Americans aren’t up for the job,” Law said, adding:

Instead of businesses taking responsibility, they are essentially pointing the blame on Americans saying “Oh, they’re untrained, they’re not up for the task.” Then they just push the Americans out the door, bring in foreign workers, and turn down the wages, worsen the conditions and rely on a compliant workforce that won’t speak up, won’t try to unionize, likely won’t go complain to the authorities about unsafe and unhealthy working conditions. These workers will turn out more output at great risk to themselves possibly depending on the type of job and the employers will reap larger benefits.

To his credit, Walsh noted that visa worker programs are not immigration programs: “We need to figure out some immigration laws and get some reform. Not H-2B visas, H-2A visas, not those visas — that’s not immigration.”

Many blue-collar visa workers are extracted from poor countries and face abuse from employers in short-term contracts made possible by the H-2B program and the uncapped H-2A program.

White-collar visa workers are hired by CEOs to displace salaried American professionals in exchange for the dangled promise of green cards and citizenship for themselves and their children. The U.S. has a resident workforce of at least 1.5 million white-collar visa workers in the Green Card Workforce, most of whom are imported via the H-1B, OPT, L-1, J-1, TN, E-2, B-1, and B-1/B-2 visa programs.

Walsh’s labor department does little to protect American graduates from corporate abuse of the visa-worker programs.

Many Democrats argue for the replacement of sidelined American workers with younger workers extracted from poor countries.

“We just don’t have enough people to replace those who are leaving the labor force,” Sen. Robert Menendez (D-NJ) said at a May 10 hearing with Treasury Secretary Janet Yellin. “Now, what we do have is thousands of hardworking immigrants who are willing to work if Congress would simply allow them to do so,” he added.

“Would addressing the immigration visa backlog help shore up the labor supply and therefore the supply chain as a whole?” Menendez asked Yellin.

Senator, I agree with you. I think would be very helpful, especially under the conditions that you described. The labor market is arguably as tight with about as large a supply-demand imbalance as we’ve seen in U.S. postwar history. We’ve had a decline in legal immigration, and I think that taking steps to shore up our workforce — for example, you refer to the enormous backlog of applications. I believe that people, immigrants who have had legal work permits and need to have them renewed, have faced very substantial backlogs. I think the White House recently announced that it’s taking steps to make sure that those [foreign] individuals will be able to work in spite of the backlog.

The vast majority of journalists in Washington D.C. are under intense pressure to ignore the labor market distortions caused by immigration and the visa programs. On May 16, for example, RollCall.com touted investors’ demands for more migration, with only a brief reference to Americans’ right to their own national labor market:

U.S. economic strength depends in part on its ability to attract immigrants from around the world, advocates say. If high-skilled immigrants spend years languishing in visa backlogs, industries dependent on their talent will suffer.

“We have millions of jobs just in the STEM-related industries that are open today,” said Phillip Connor, a senior demographer at FWD.us. “And these are highly qualified individuals that would be needed for these positions — and they go unfilled year after year.”

The policy is hidden behind a wide variety of excuses and explanations, such as the claim that the U.S. is a “Nation of Immigrants” or that Americans have a duty to accept foreign refugees. But the colonialism-like economic strategy also kills many migrants, exploits poor people, and splits foreign families as it extracts human-resources wealth from the poor home countries.

The economic policy is backed by progressives who wish to transform the U.S. from a society governed by European-origin civic culture into a progressive-led empire of competing identity groups. “We’re trying to become the first multiracial, multi-ethnic superpower in the world,” Rep. Rohit Khanna (D-CA) told the New York Times on March 21. “It will be an extraordinary achievement … we will ultimately triumph,” he boasted.

Not surprisingly, the wealth-shifting extraction migration policy is very unpopular, according to a wide variety of polls. The polls show deep and broad public opposition to labor migration and the inflow of foreign contract workers into jobs sought by young U.S. graduates.

The opposition is growing, anti-establishment, multiracial, cross-sex, non-racist, class-based,  bipartisan, rational, persistent, and recognizes the solidarity that Americans owe to one another.