The rising share of global migrants arriving at the southern U.S. border has prompted pro-migration advocates to fund a mosque in Tijuana, Mexico.

The two-story shelter is in Tijuana’s Zona Norte close to the U.S.-Mexico border. The 8,000-square-foot facility has the capacity to serve up to 150 people arriving at the border seeking asylum. Some might stay in Mexico, but most are looking to enter the United States. It currently houses 30 people.

The investment was almost half a million dollars, raised from community donations, [Sonia] García said. The shelter is home to migrants from Kenya, Ghana, Russia and Afghanistan, among others.

“We are safe here,” said Ilyas Salarzai, 22, from Afghanistan. “The Latina Muslim Foundation has been very good.” Salarzai is currently waiting for certain documents as part of his immigration process.

The mosque will have plenty of customers. In May, more than 2,000 single adult migrants from Muslim-majority countries were registered at the U.s. border with Mexico.

Almost half the migrants who arrived at the border in May were from countries that had sent few migrants until President Joe Biden pushed the door open in January 2021. “Unlike every one of his predecessors, Biden isn’t attempting to deter illegal entrants — he is instead inviting asylum applications from any foreign national who can make it here,” Mark Krikorian, the director of the Center for Immigration Studies, tweeted on June 17.

During the month, officials registered 239,416 migrants arriving at the border. Only 106,999 were rejected under the Title 42 anti-disease barrier because of exceptions created by homeland security Alejandro Mayorkas. 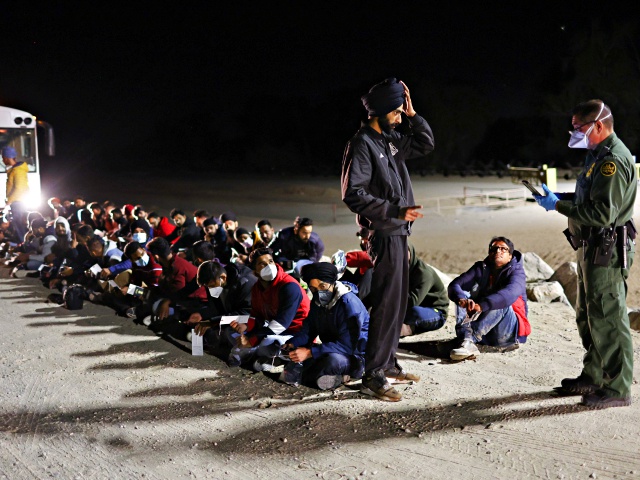 Immigrants from India wait to board a U.S. Border Patrol bus to be taken for processing after crossing the border from Mexico on May 22, 2022 in Yuma, Arizona. (Mario Tama/Getty Images)

That left 138,717 migrants who were registered. Nearly all of the economic migrants were approved for release under various quasi-legal excuses, such as the nation’s much-abused asylum rules.

The to-be-released group included 14,696 “Unaccompanied Alein Children,” some of whom are children being delivered to illegal-migrant parents, but most of whom are youths looking for jobs.

Once released, the migrants take jobs, if only because they need to pay the labor-trafficking debts to Mexican cartels and other smuggling gangs.

The flood of extra labor helps to cut Americans’ wages, drive up Americans’ rents, and to consume services and goods — such as used autos — that are also needed by Americans.

The largest inflow came from countries in the Caribbean and South America — Venezuela (3,410), Haiti (3,110), Cuba (19,975), Brazil (1,266), and Nicaragua (15,512). Those inflows are rising, largely because prior migrants from those countries used their cellphones to show their home-country peers how Biden’s administration had released them into the U.S. job market.

Here's where they are coming from pic.twitter.com/KNwWnv5zDR

In May, the global arrivals were fewer than the pan-American arrivals. But each released migrant will likely start a new chain of migrants from the often-huge populations in their home countries.

Border migration is changing again. After decades of majority Mexican migration, migration from Northern CentAm started increasing, eventually dominating, from 2010-2019. Since 2019, the share of migrants from elsewhere, mostly in W. Hemisphere, has increased & is now a plurality pic.twitter.com/AwK2WRudjl

Biden’s deputies choose to exempt nearly all of the global migrants from the Title 42 border-barrier rule. For example, none of the 1,770 Turks or the 172 Senegalese, and just one of the 104 people from Somalia, were turned back at the border. Nearly all of the people rejected by the Title 42 rules are from Mexico, Honduras, El Salvador, and Guatemala:

That's it: May saw the 2 millionth migrant expelled, without even a chance to ask for protection, at the US-Mexico border since the pandemic, and Title 42, began.

77 percent of those expulsions happened on Joe Biden's watch. pic.twitter.com/GQ194E9Dm9

The May inflow of 138,717 men, women, youths, and children is just part of the overall inflow.

For example, leaks from border officials suggest that another 55,000 migrants sneak across the border each month. Nearly all of these so-called “got-aways” are men seeking jobs. That month;y inflow has put roughly 440,o00 extra migrants into the US labor market since October 1.

In addition, officials at the Department of State are awarding many work visas to foreigners, including many Filipino nurses: 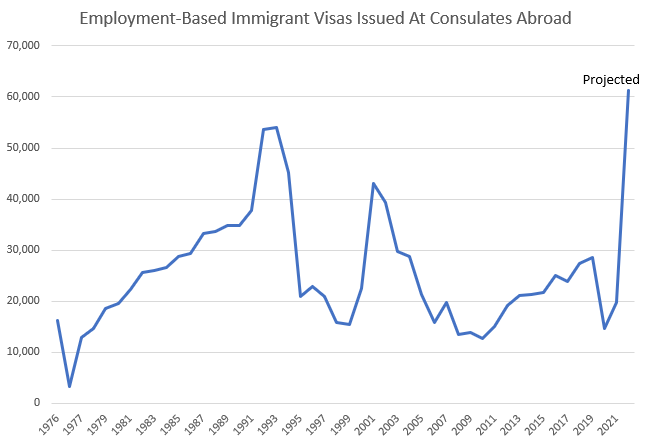 Federal agencies also invite roughly 1 million foreign temporary workers. Many additional foreign workers arrive as tourists but take jobs, and many others overstay their visas and stay illegally in jobs.

The quasi-legal inflow of migrants — plus the inflow of got-aways — across the Mexican borders will is on track to exceed 1 million during the year.

All told, the inflow of migrants and workers in 2022 is likely to hit three million workers –or roughly 3 foreign workers for every four Americans who turn 18.

The huge inflow of legal, quasi-legal, and illegal migrants is intended to cut Americans’ wages and drive up their rents.

The extraction migration economic policy is hidden behind a wide variety of noble-sounding excuses and explanations. For example, progressives claim that the U.S. is a “Nation of Immigrants,” that Americans have a duty to accept foreign refugees, and that the state must renew itself by replacing populations.

But the colonialism-like economic strategy also kills many migrants, exploits poor people, and splits foreign families as it extracts human-resource wealth from the poor home countries. The migration policy also minimizes shareholder pressure on companies to build up complementary trade with poor countries.

The economic policy is backed by progressives who wish to transform the U.S. from a society governed by European-origin civic culture into a progressive-directed empire of competitive, resentful identity groups.

“We’re trying to become the first multiracial, multi-ethnic superpower in the world,” Rep. Rohit Khanna (D-CA) told the New York Times on March 21. “It will be an extraordinary achievement … we will ultimately triumph,” he boasted.

Not surprisingly, the wealth-shifting extraction migration policy is very unpopular, according to a wide variety of polls. These polls show deep and broad public opposition to labor migration and the inflow of foreign contract workers into careers sought by young U.S. graduates.