Millions of Americans remain out of the labor market, new research shows, as mass immigration pours into the United States under President Joe Biden.

A study by the Federation for American Immigration Reform (FAIR) — which looked at job figures from September 2020 to March 2022 — found that while the U.S. Chamber of Commerce and other corporate special interests lobby for more overall immigration, the number of Americans still on the labor market sidelines remains substantial.

“There are approximately 11.5 million job openings in the United States right now, and 14.73 million employable Americans,” FAIR researchers note. “This means that there are 3.23 million more workers in the country than open jobs.” 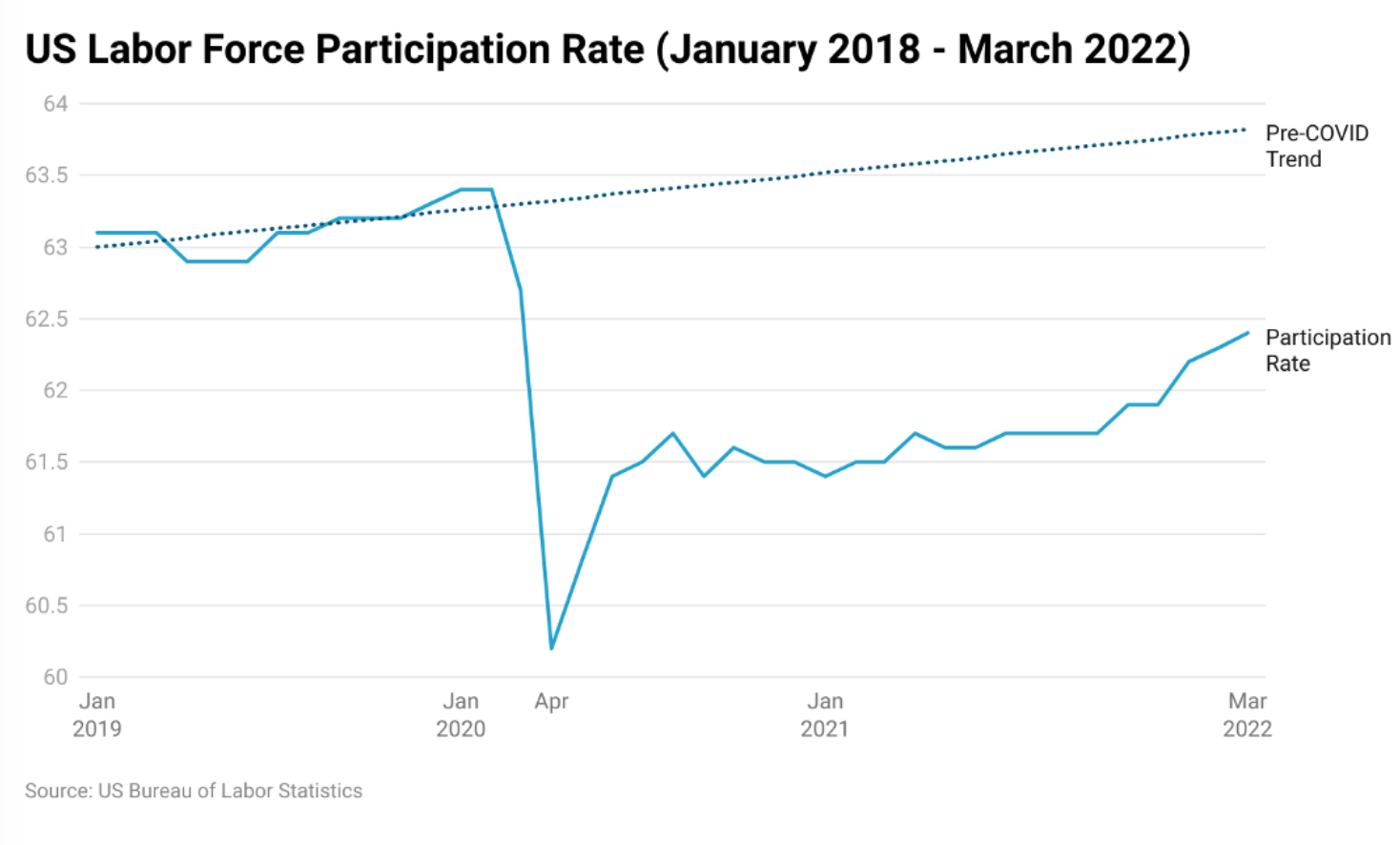 Much of the recent drop-off in the labor force participation rate, FAIR researchers state, can be credited to the Chinese coronavirus pandemic and the generous public benefits the federal government began offering as a result.

“The pandemic resulted in a 3.4 percentage point drop in the labor force participation rate, or a decrease of 8,065,000 workers,” FAIR researchers note:

That figure does not include those who were participating in the labor force but became unemployed (approximately 23 million). That means a more accurate total of those unemployed in April 2020 was about 31 million.
[Emphasis added]

As of March 2022, the labor force participation rate was still around a full percentage point lower than it was in February 2020. This mean that roughly 2,370,000 people who left the jobs market due to the COVID-19 pandemic still haven’t rejoined the economy. While a small number of these individuals may never return, it’s logical to assume that most will, and the data support this assessment. In addition, as generous pandemic-related welfare programs expired throughout 2021 at the federal and state levels, many of the individuals participating in these programs re-entered the labor force. It’s safe to assume that this trend will resume as these programs continue to expire. [Emphasis added]

Furthermore, the pre-COVID trend of the labor force participation rate suggests that it would likely have reached at least 63.7 percent in March 2022 had pandemic disruptions not occurred. This means it’s likely that 3,330,000 people have still not rejoined the labor force. [Emphasis added]

Likewise, researchers at the Center for Immigration Studies (CIS) found similar labor market trends — showing millions of Americans on the sidelines and even less likely to rejoin if foreign competition for jobs continues rising as a result of mass immigration.

For working-class Americans, the same is true.

The rise of Americans on the job market sidelines coincides with record-setting levels of illegal and legal immigration to the U.S. — adding immense foreign competition against employable Americans.

FAIR researchers estimate that the nation’s foreign-born population sits at a record 49 million as of March 2022. Since September 2020, researchers state that more than 2.5 million foreign nationals have been added to the U.S. population. 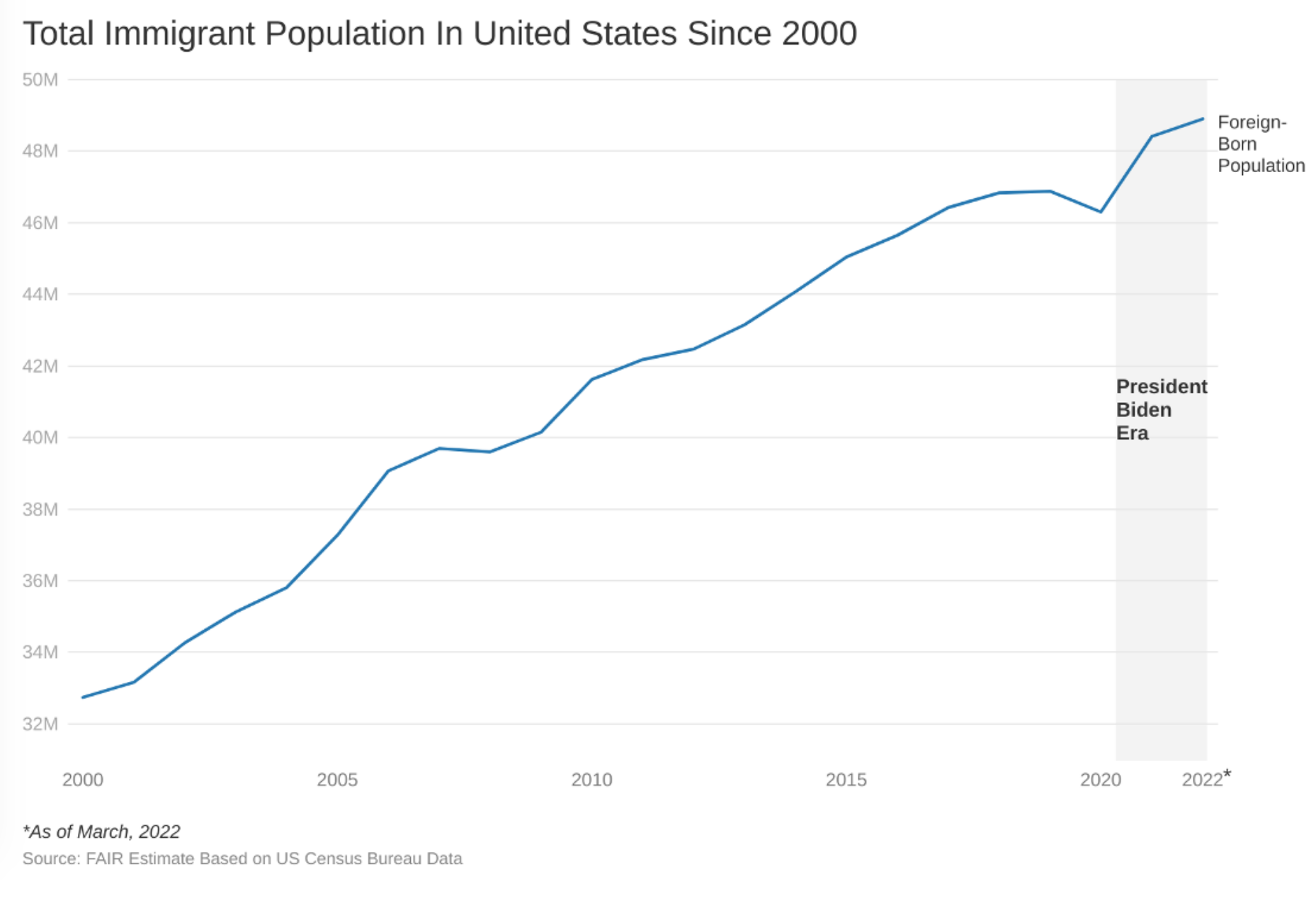 The Biden administration shows no signs of easing foreign competition against Americans in the job market to get more off the sidelines. At current rates, the foreign-born population is expected to hit a record 70 million by 2060.

While the federal government rewards about 1.2 million foreign nationals with green cards annually and another 1.5 million with temporary work visas, the Biden administration has released over a million border crossers and illegal aliens into the U.S. interior since February 2020.

Hundreds of thousands of those released into the U.S. interior are given work permits to take American jobs while they await their asylum and immigration hearings, intensifying pressures that unemployed Americans already face.