Department of Homeland Security (DHS) Secretary Alejandro Mayorkas testified in May that the Disinformation Governance Board had not yet met, but Sen. Josh Hawley (R-MO) obtained DHS records showing the board’s “Steering Group” had convened on multiple occasions before then.

During Mayorkas’s May 4 testimony before the Homeland Security and Government Affairs Committee, Hawley grilled him concerning the Disinformation Governance Board and the hiring of Nina Jankowicz as its executive director:

“I am sure there are documents pertaining to this board – minutes of meetings, communications about who would serve on the board. Will you release those to this committee?” Hawley asked.

“Senator, there are not yet – this governance…” Mayorkas began before Hawley pressed him.

“Wait a minute. There are no meetings about this board? You’ve not created any records?” he followed up.

“It has not yet begun its work,” Mayorkas said.

“You’ve hired her; you certainly had deliberations about hiring her,” Hawley asserted.

“The board has not yet met,” the DHS secretary insisted.

Hawley continued to press him until Mayorkas submitted that he would turn documents over to the committee. After finally receiving the heavily redacted documents some six months later, Hawley made them available to the public in a press release on Wednesday. Email correspondence between DHS officials shows the Disinformation Governance Board Steering Group “convened” several times dating back to February – two months before Mayorkas’s testimony. In light of the documents, Hawley penned a letter to Mayorkas on Wednesday, calling his testimony “untrue.”

According to the documents, on February 4, Samantha Vinograd, assistant secretary for Counterterrorism and Threat Prevention for the DHS, emailed Richard Silvers and Kelli Ann Burriesc – the DHS undersecretary and deputy undersecretary for the Office of Strategy, Policy, and Plans – among others, about a Disinformation Governance Board Steering Group meeting that occurred that day. 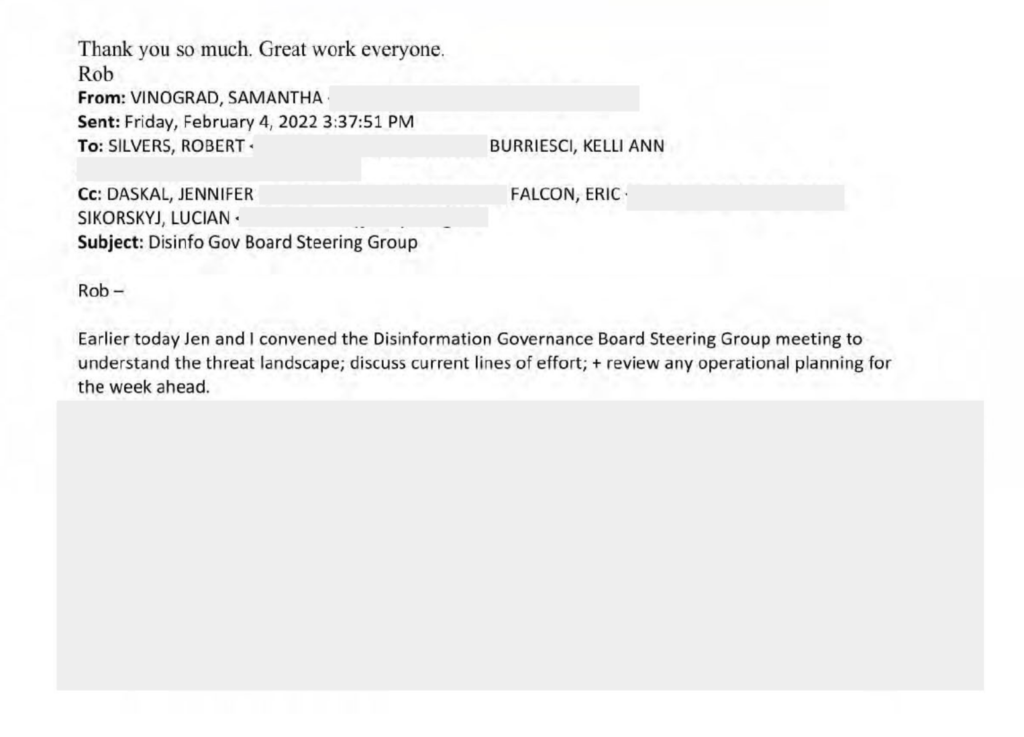 “Earlier today Jen and I convened the Disinformation Governance Board Steering Group meeting to understand the threat landscape; discuss current lines of effort; +renew any operational planning for the week ahead,” Vinograd wrote per the documents.

Just over a week later, on February 11, Vinograd sent Silvers and others an email stating, “Jen and I convened the Steering Group tonight. We discussed [redacted]. 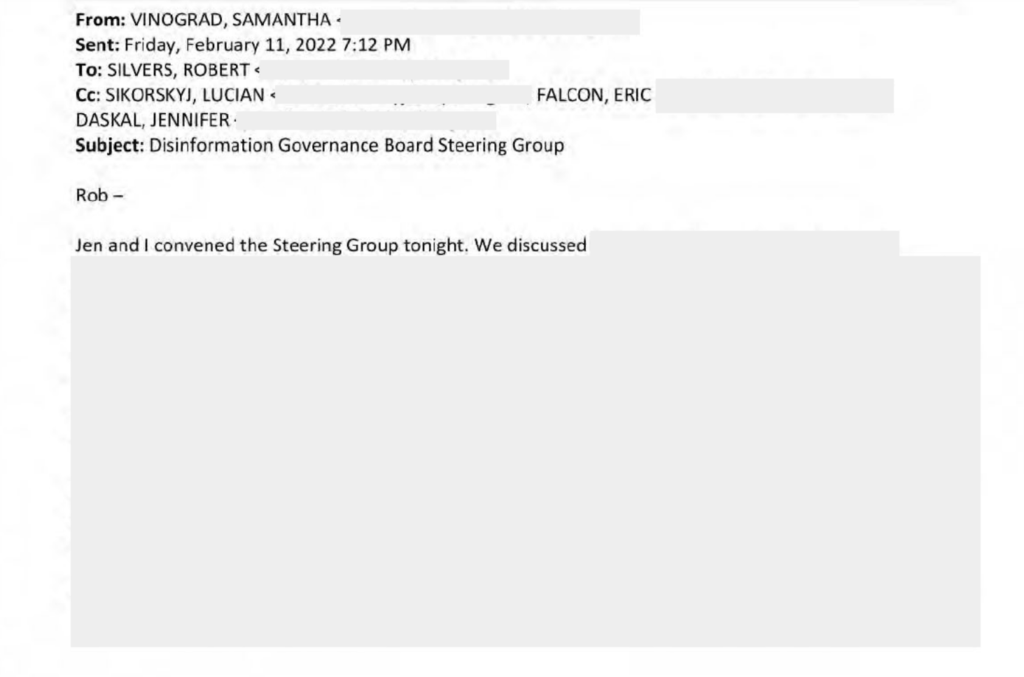 In a March 8 email, Jankowicz, who has described herself as the “Mary Poppins of disinformation” and was tapped by the DHS to be the executive director of the Disinformation Governance Board, asked for “a copy of the last 2-3 steering group meeting agendas.” 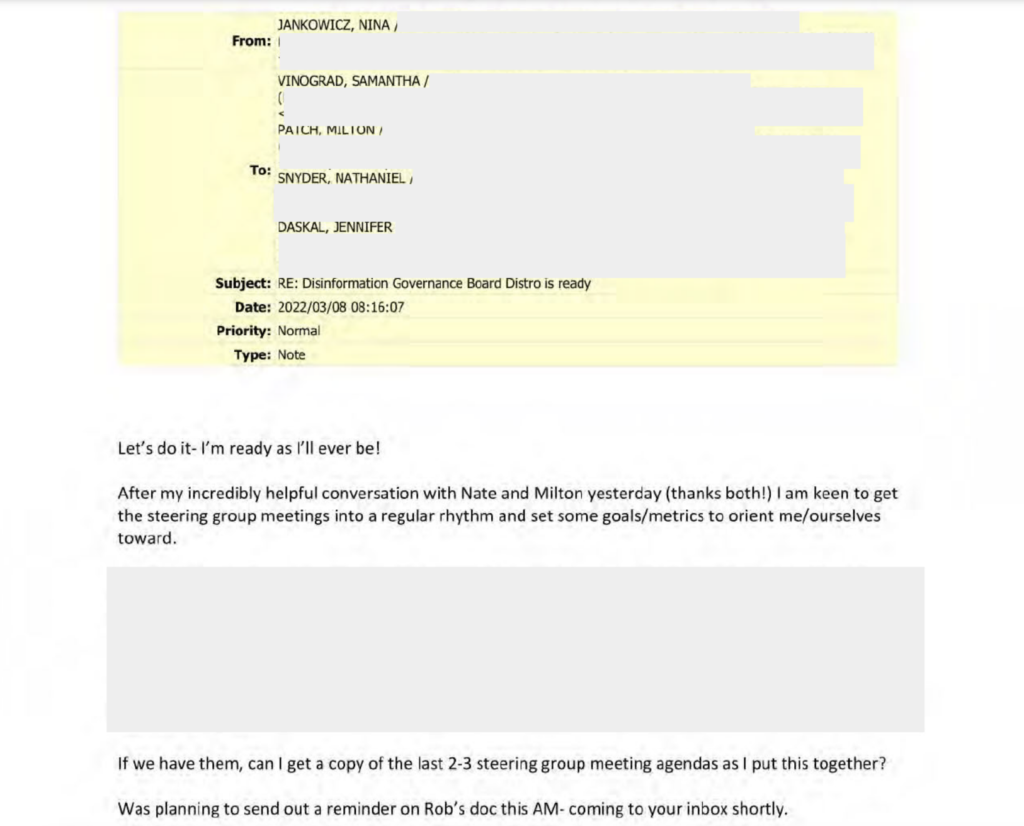 Furthermore, a May 2 press release dubbed the board a “working group” that did not “have any operational authority or capability.” In his letter to Mayorkas, Hawley pushed back against this categorization, citing Jankowicz’s comments from a March 25 email to colleagues.

“Despite your assertions to the contrary, the board appeared to have operational authorities: Ms. Jankowicz indicated it was the responsibility of Disinformation Board members to “ensure that their respective components implement, execute, and follow Board decisions,” Hawley wrote.

He later called out Mayorkas for the heavy redactions and requested unredacted versions of the documents and others pertaining to additional oversight requests:

The documents you turned over to my office, six months after I requested them, are so heavily redacted most are illegible.

So that Congress can consider remedial legislation, please provide unredacted copies of all documents produced to Congress as well as all records responsive to my oversight requests dated April 28, May 23, July 7, July 13, September 21, and November 14.

Jankowicz resigned from the board in May after garnering intense criticism from journalists who cited “a host of questionable positions on freedom of speech and government censorship as well as cringeworthy TikTok videos,” as Breitbart News reported.

The DHS ultimately announced the termination of the board on August 24 at the recommendation of the Homeland Security Advisory Council.