A Google search for the term “Democratic Party” returned a logo of a rat replacing the party’s traditional donkey mascot. The manipulation occured in Google’s Knowledge Panel, which the tech giant displays prominently for many searches. 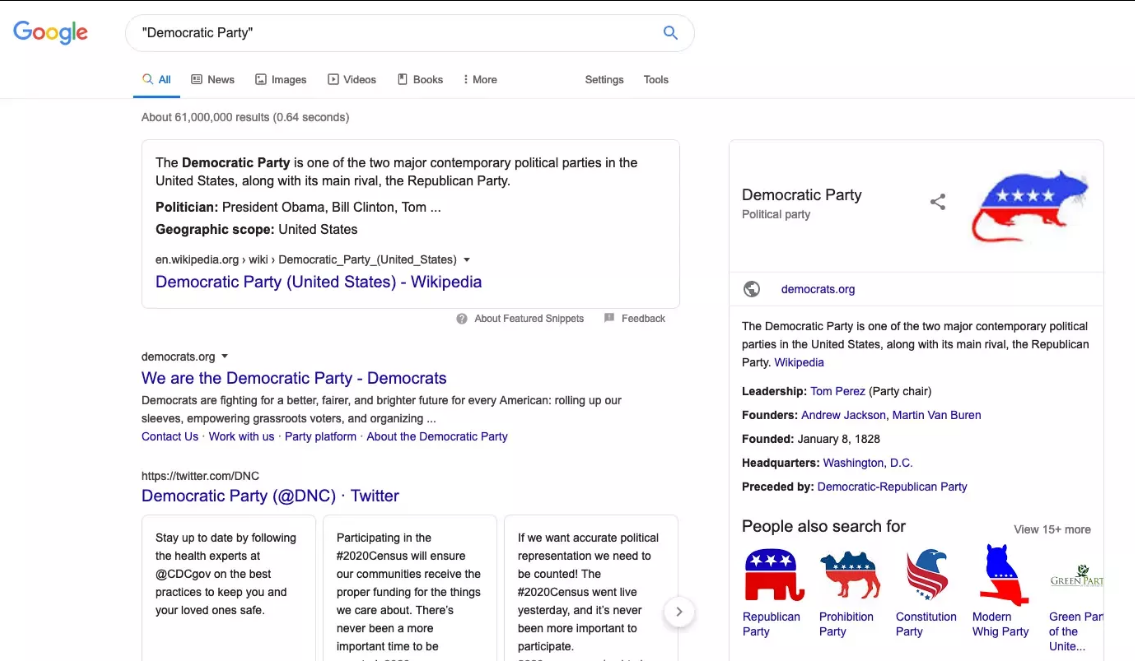 Mashable reached out to Google to request a comment on the manipulation, to which a spokesperson stated that if the Democratic Party had taken the time to claim its Knowledge Panel then it couldn’t have been so easily changed.

“Most images in Knowledge Panels are automatically generated from pages on the web,” wrote the spokesperson over email. “When errors are reported, we fix them quickly. We encourage people and organizations to claim their Knowledge Panels, which allows them to select a representative image.”

This is far from the first time that a political party’s Knowledge Panel has been defaced, Breitbart News reported in June of 2018 that Google displayed an image labeled “BIGOT” next to searches for North Carolina State Senator Trudy Wade.

“If you search “Trudy Wade” on Google, the search giant displays an old photo in the “knowledge panel” of its search results with “BIGOT” superimposed in big red letters” reported Vice.

The image is now removed.

Google apologized to Sen. Wade in a statement on social media.

Shortly before that in May 2018, it was reported that “Nazism” was listed as the Republican party’s official political ideology. Breitbart News wrote at the time:

Until earlier today, a Google search for the California Republican Party brought up a list of ideologies in the “knowledge panel” that sometimes appears on the right-hand side of search results. These ideologies included “Nazism, Conservatism, Market liberalism, fiscal conservatism, green conservatism.” The story was first reported by Vice.

The information for these boxes appears to have been sourced from Wikipedia. The edit history of the California Republican party shows that someone edited the party’s Wikipedia page to include “Nazism” among its ideologies.

Responding to Rep. McCarthy, Google confirmed that “Wikipedia vandalism” was the cause of the problem.

As Breitbart News has documented before, Wikipedia pages are oftenbiased smear-jobs, the result of partisan editing by anonymous, unaccountable contributors to the site. Nevertheless, big tech companies continue to give information from Wikipedia a privileged position on their platforms — not just next to Google searches but also YouTube videos and Facebook posts.

At the time of the writing of this article, Google’s Knowledge Panel for the Democratic Party had been restored to its original state.