There’s a new competitive sport at this year’s Winter Olympics in South Korea. Its participants are members of the establishment media. Their aim: to suck up to the despotic regime in North Korea. The gold medal goes to the most ingratiating and morally obtuse totalitarian ass-kisser. And though the games have just begun, I think I know who the winner is.

Though this new competition was introduced especially for the Pyeongchang Games, it has many historical antecedents, which I shall get to in a moment. For now, the current field of play is the media’s fawning coverage of Kim Yo Jong, sister of North Korean dictator Kim Jong Un, who has become the media’s belle of the ball. As a CNN headline put it, she is “stealing the show” at the Winter Olympics.

The Zucker News Network, vying for the gold, trilled about Kim’s ability to offer “a smile, a handshake and a warm message” to fellow attendees. And CNN didn’t stop there: “If ‘diplomatic dance’ were an event at the Winter Olympics,” it added, “Kim Jong Un’s younger sister would be favored to win gold.”

Not to be outdone, Reuters jumped into the competition with this headline: “North Korea heading for diplomacy gold medal at Olympics.”

But neither CNN nor Reuters—nor any of the other swooning media outlets, trying hard as they might—can top the person who I think deserves the 2018 gold medal for Best Suck-up to a Murderous Regime.

And make no mistake, it is murderous. The North Korean regime is run like a Stalinist police state, enslaving and killing millions of its own people, including Kim’s own family members. Human Rights Watch calls it “one of the most repressive authoritarian states in the world,” and Amnesty International agrees. Kim Yo Jong, who heads the “Propaganda and Agitation Department” of the country’s communist party, is a major bloody cog in that monstrous system. For the unfortunate souls who live under her family’s regime, any rejection of her propaganda will get you a death sentence or your entire family a prison sentence.

On that last point, United Nations inspector Michael Kirby spoke in 2013 about the “unspeakable atrocities” committed in North Korea’s political prison camps, including “survivors who suffered through childhoods of starvation”–forced to survive on lizards, rodents, and grass–due to the regime’s practice of “guilt by association” to punish “other generations for a family member’s perceived political views or affiliation.” Kirby also heard testimony of women forced to drown their own babies in buckets.

If there were any justice in this world, Sister Kim would be locked up for crimes against humanity. But instead, the establishment corporate media piles on the praise, making themselves once again useful idiots for a mass murderer’s propaganda machine.

Why would anyone with a scintilla of moral discernment do this? I can think of three reasons:

The establishment media has had an historic romance with communism.  Back in 1932, The New York Times won a Pulitzer Prize for its completely false coverage—whitewashing the evil darkness—of Joseph Stalin’s deliberately induced famine in Ukraine, then an unwilling part of the Soviet Union.  That planned calamity killed millions (we might note that the words “killed millions” and “communism” go well together).  Then, in the 1950s, the Times ladled equally laudatory coverage on another communist monster, Fidel Castro.

The more howlingly anti-American a communist regime is—and most, if not all, of them have been—the more love the media bestows on them. So, is it any wonder they love Sister Kim? After all, her brother—the man who has repeatedly threatened to nuke the U.S.—is an honorary member of the #Resistance.

2. “Okay, so he’s killed a lot of people, but I’ll ask him about that in the interview!”

In addition to its left-wing-ness, the establishment media has another ideology: ego gratification. Reporters would love nothing more than to get the “get.” And the big “get” right now is an interview with Kim Jong Un. They are happy to walk over corpses to get access to him. So, they are sucking up to the North Koreans any which way they can; the industry jargon is “beat sweetening.”

Of course, there’s nothing new about this cynical tactic. Back in 2003, Eason Jordan, a top CNN executive, confessed that his network went easy on Iraq to maintain its access to Saddam Hussein.  On this point, former Bush 43 press secretary Ari Fleischer nailed it when he tweeted:

Reuters/CNN/ABC don’t have bureaus in NoKorea, but their fawning coverage of NK reminds me of how CNN sucked up to Saddam so they could keep their Baghdad bureau open. Going easy on anti-American dictators is another form of Blame America First journalism. https://t.co/f5PWFkYE4r

Yes, the media finds it pleasing, for PC reasons, to depict Pence as worse than the North Korean dictatrix.  Okay, mass-murder is bad, but Pence-style social conservatism is worse.

You think that that’s too strong a statement?  That I’m exaggerating the nature of establishment media bias?

Let me introduce you to this year’s Gold Medalist for Morally Bankrupt Murderous Tyrant Bootlicking: Jeet Heer of The New Republic.

Heer tweeted on February 10: “Do you realize how massively you have to fuck up so that Kim Jong Un’s family looks good by comparison?  But Trump & Pence have pulled it off.” 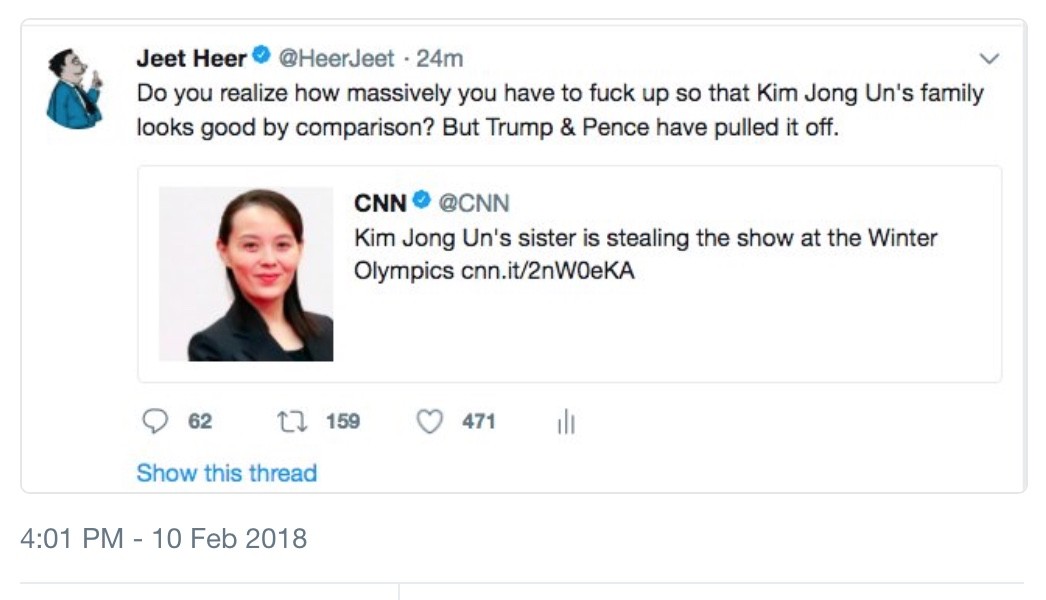 So there you have it: Pence, and, of course, Trump, are worse than the murderous North Korean regime.

Heer’s tweet was not only cretinous about Pence, but cruel to the millions of victims of North Korean communism—including the 36,000 Americans who died in the Korean War.

Caught in his act of idiocy, Heer responded by deleting the tweet and then following up with a 16-part thread of twitter bluster, in which he accused his critics of being “willfully obtuse.” In other words, it was their fault for not understanding his genius.

Congrats on winning the gold, Mr. Heer. Please be sure to use Little Rocket Man’s flag and anthem at the medal ceremony.