Multiple top Chinese diplomats threatened that America would “pay the price” if it continued to support the government of Taiwan and that accepting the existence of a Taiwanese state would lead to “dangerous situations” – less than a week after a suspected Chinese nationalist opened fire at a Taiwanese church group in California.

Police in Orange County, California, identified David Chou (Chou Wenwei) as the prime suspect in a fatal shooting at the Geneva Presbyterian Church in Laguna Woods, California, on Sunday. Chou, born in, and a longtime resident of, Taiwan, injured five people and killed a sixth at a Taiwanese church luncheon before being subdued by the one fatal victim, Dr. John Cheng, and other congregants. Law enforcement authorities said they found items in Chou’s car that indicated he was “upset” about tensions between China and Taiwan and have left the door open to hate crime charges in addition to several counts of murder and attempted murder, which could result in a death penalty.

China initially ignored the shooting but has since used its government media arms to express outrage at global concerns of violent anti-Taiwanese rhetoric from Beijing inspiring terrorism. Its top officials promptly resumed threats against those who support Taiwan in remarks this week – particularly against the United States in response to the administration of President Joe Biden supporting Taiwan’s participation in the upcoming World Health Assembly. The World Health Organization (W.H.O.), which hosts the conference, bans Taiwan from being a member in response to pressure from China.

Top Politburo member Yang Jiechi, who has taken on the role of dictator Xi Jinping’s most belligerent mouthpiece, led the charge in a conversation with American National Security Adviser Jake Sullivan on Wednesday. According to the Chinese state propaganda outlet Global Times, Yang told Sullivan that if the Biden administration insists on supporting Taiwan’s participation in global public health platforms – in other words, “goes further down the wrong path” – “it will surely put the situation in serious jeopardy.” 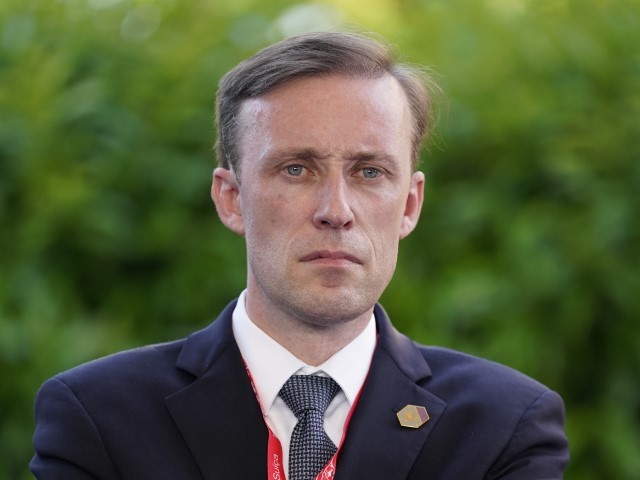 “The US has been adopting wrongful narratives and actions that interfere with China’s domestic politics and are harmful to China’s interests. China has been making stern and powerful responses,” Yang reportedly told Sullivan, according to Chinese state network CCTV. “If the US continues to play the ‘Taiwan card’ and head further on the wrong path, this will certainly lead to dangerous situations.”

Asked about Yang’s comments, specifically his violent warning of a “dangerous situation,” during Thursday’s regular press briefing, Chinese Foreign Ministry spokesman Zhao Lijian did not walk back the threat.

“I can tell you that over some time, the US has tried to play ‘the Taiwan card’ time and again, reneged on its promise on the Taiwan question and sent wrong signals to the ‘Taiwan independence’ forces,” Zhao insisted. “Such moves have harmed the China-US relations and undermined peace and stability across the Taiwan Strait.”

America does not recognize Taiwan as a sovereign state, a decision made under former President Jimmy Carter, but does maintain dialogue on an informal basis with Taipei. Taipei maintains de facto embassies known as “Economic and Cultural Representative Offices” (TECRO) in the United States.

Prior to Thursday’s briefing, the Chinese Foreign Ministry threatened America on Wednesday that it would “pay the price” if it continued to support Taiwan.

“Those who break faith not only tarnish their own reputation, but will also pay the price for doing so. Breaking commitments on the Taiwan question will incur historical punishment,” another spokesman, Wang Wenbin, ominously claimed.

Chinese Foreign Minister Wang Yi – who is apparently in a power struggle with Yang, who the Global Times falsely called China’s “top diplomat” this week – made similar threats this week against Japan as well.

“State Councilor and Foreign Minister Wang Yi warned Japan in a virtual talk with Japanese Foreign Minister Yoshimasa Hayashi on Wednesday not to pull the chestnuts from the fire for others and take the wrong path of beggar-thy-neighbor,” the Global Times reported. “Tokyo and Washington were recently active in a supportive gesture in advocating Taiwan authorities’ participation to the World Health Assembly (WHA) which will commence on May 22.”

Wang accused Taiwan supporters of creating a “foul atmosphere” and warned Japan to “bear in mind regional peace and stability” and refrain from supporting Taiwan – an apparent threat of military action.

Chinese officials’ remarks this week are far from the most violent threats against those who acknowledge the existence of a sovereign Taiwanese state. In 2019, for example, dictator Xi Jinping declared that anyone who believed in the nation of Taiwan – or pro-independence activists in locations like Hong Kong and East Turkistan – would meet gruesome deaths.

“Anyone who attempts to split any region from China will perish, with their bodies smashed and bones ground to powder,” Xi reportedly said.

Years of similar calls to violence from top Chinese officials preceded the mass shooting in California last weekend. Following the publication of his identity, multiple Asian news outlets found evidence of alleged shooter Chou’s membership in a subsidiary group of the National Association for China’s Peaceful Unification (NACPU), a Chinese government organization dedicated to denying Taiwanese sovereignty and designated a “foreign mission” of the Chinese government in America in 2020. Chou appeared in a local news report at an inaugural event for a local Las Vegas NACPU chapter in 2019, holding up a banner condemning Taiwanese independence “demons.”