China’s state-run Global Times propaganda newspaper broke its silence on Tuesday regarding a deadly mass shooting in California that officials say was fueled by Chinese nationalist hatred against Taiwanese statehood, denying that its violent anti-Taiwanese rhetoric played a role.

Taiwan is a sovereign, democratic, free state operating entirely independently from communist China. Taiwan has never been governed by any regime occupying Beijing. Despite this, the Chinese Communist Party insists that Taiwan is a “province” of China and that its statehood is illegitimate.

Chinese state propaganda regularly threatens to destroy Taiwan’s government with deadly force. In January, the Global Times boasted that Chinese military exercises near the island nation were like “a noose tightening around the neck” of Taiwanese citizens.

Chinese dictator Xi Jinping famously threatened in a 2019 speech to have the “bones ground to powder” of anyone who accepted that Taiwan was a country – and anyone who supported the independence of Tibet, East Turkistan, or any other Chinese communist-occupied territory.

The Orange County District Attorney’s office announced on Tuesday that it had charged 68-year-old David Chou (Chou Wenwei) with “one felony count of murder, five felony counts of premeditated attempted murder, four felony counts of possession of an explosive device, and felony enhancements of lying in wait and personal discharge of a firearm causing death.” Chou is the suspect – found hog-tied by his victims when police arrived on the scene – in the mass shooting at a Taiwanese church luncheon in Laguna Woods, California, on Monday.

“Chou faces a maximum sentence of death if convicted on all charges,” the D.A. said.

Police confirmed the presence of materials in Chou’s car that indicated he was “upset” by relations between China and Taiwan. Images of Chou attending an event organized by a Chinese regime umbrella organization and holding a banner condemning Taiwanese “demons” surfaced this week.

The government of Taiwan confirmed that he was born there; Chou is a naturalized U.S. citizen.

The Chinese government’s Global Times condemned all efforts to associate Chou’s violent attack with the Communist Party’s violent rhetoric against Taiwanese nationals. It also insisted that Chou was not Chinese – while simultaneously insisting Taiwanese citizenship does not exist – and blamed America for the shooting since “the crime was committed by a US citizen.”

“The identity of the suspect behind the California church shooting, who was born in China’s Taiwan and immigrated to the US, has become a focal point of West media,” the Times observed derisively, “they were using it to fan anti-Chinese sentiment and cross-Taiwan Straits tensions. Observers said that US media should instead question why the US soil has constantly bred gun violence.”

The Times condemned media reports identifying Chou as a “Chinese immigrant” while insisting on referring to his birthplace, the nation of Taiwan, as “China’s Taiwan.” The propaganda newspaper presented a clear distinction between Chou, born in Taiwan, and “a man born in the Chinese mainland” – presumably an admission that Taiwan is not China.

Ultimately, to avoid clarifying this dissonance, the Global Times article identified Chou as an unruly American.

“The truth is the crime was committed by a US citizen. So why are the US media so focused on where he lived before moving to the US,” the Times asked, “instead of asking themselves, why the US soil bred so much gun violence,” citing an in-house “expert.”

A Chinese government spokesman identified as Zhou Fenglian is also quoted in the article, calling the Taiwanese government “despicable” for expressing concern for its people abroad in the aftermath of the shooting.

In contrast, Chinese propagandists have repeatedly condemned America as a “neo-Nazi” state following a mass shooting by an alleged white supremacist in Buffalo, New York.

“Shooting cases are not rare in the U.S., but the latest one in Buffalo shows some special characteristics that proved that neo-Nazi ideology is growing and continuing to influence white people, especially teenagers, in U.S. society,” the Global Times claimed.

In its article on the California shooting, it also blames American “foreign policy” for unspecified attacks on Asian people on American soil.

Chou is being charged with organizing the assault on the California luncheon, hosted by the Geneva Presbyterian Church and meant to celebrate the return of a beloved pastor on Sunday. Chou allegedly opened fire on the participants, largely senior citizens, injuring five people and killing one, Dr. John Cheng, who witnesses said tackled Chou and made it possible to disarm him before he was fatally shot. The victims in the attack ranged from 66 to 92 years of age. 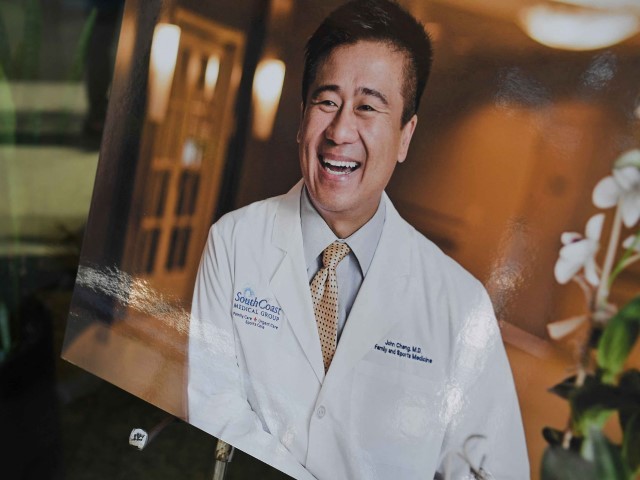 A photo of Dr. John Cheng is seen outside his office in Aliso Viejo, California, May 16, 2022. – Cheng, 52, a family and sports medicine doctor, was killed protecting others when a gunman opened fire at a church luncheon he was attending in nearby Laguna Woods, California on May 15, 2022. (ROBYN BECK/AFP via Getty Images)

Law enforcement officials said that Chou left materials in his car indicating he was “upset” about the relationship with China and Taiwan, and District Attorney Todd Spitzer has not closed the door on hate crime charges.

In the aftermath of the attack, Taiwanese journalists unearthed photos of Chou at an event hosted by an umbrella organization under the National Association for China’s Peaceful Unification (NACPU), designated a “foreign mission” of the Chinese government’s to the U.S. in 2020.

Chou appeared in a photo in a local news report at the NACPU event holding up a banner reading “eradication of pro-independence demons.”