Standing Tall Against Iran with Apology in Hand

More than a month after Iran captured two U.S. Navy patrol boats with ten sailors onboard January 12, there is still very little information on what transpired. Chairman of the Senate Armed Services Committee, Senator John McCain (Ariz-R), has given President Barack Obama an ultimatum: either provide details of an investigation by March 1 or he will subpoena the sailors to testify before Congress. 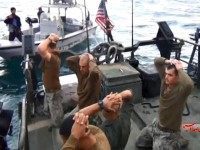