HOUSTON, Texas – Texas Governor Greg Abbott held a ceremony to sign the toughest and most comprehensive border security plan of any state in the United States of America. The legislative package provides historic levels of funding to secure the border, establishes a Child Sex Trafficking Prevention Unit, strengthens penalties for human traffickers, increases funding for the border protection unit, and seeks reimbursement from the federal government for Texas funds spent on border issues.

The Governor declared the plan a legislative priority, and one of his emergency legislative items during his State of the State address.

“We are doing this because border security has turned out to be a real challenge for the people of this state, not just on the border region but across communities across the entire state of Texas,” the Texas governor said.

Because of the magnitude of the challenge, Abbott declared securing the border an emergency issue. He added, “And the Texas legislature responded profoundly, and strongly.”

Breitbart Texas attended the bill signing ceremony, where the Governor noted that the Texas-Mexico border can be a gateway to crimes committed in other parts of the U.S.

He also said that the comprehensive legislation funds an anti-gang program “to dismember the gang operations that are causing havoc for the people of Texas.” The anti-gang program will be operated out of the Office of the Governor.

The Governor told the crowd gathered for the signing ceremony that there are more than 20,000 dangerous gang members associated with cross-border traffic-related crime in Houston alone.

More than 100,000 gang members operate across the state of Texas.

The legislation also creates a transitional intelligence center operated out of Hidalgo County, Texas, which is located right on the Texas-Mexico border.

The Governor reminded those in attendance at the Houston ceremony that more than 100 illegal immigrants were found in March 2014 in just one stash house in the city.

Harris County authorities told Abbott that if just one piece of this legislation passed, the part that focuses on crackdown on human smugglers, it could lead to the jailing of 3,000 people in Harris County, Texas alone. Houston is in Harris County.

The Governor stressed with reference to border security that “we are talking about issues that protect communities across the entire state of Texas.”

House Bill 11 is the centerpiece of the Governor’s border security plan. House Representative Dennis Bonnen (R-Angleton) authored the bill, while Senator Brian Birdwell (R-Granbury) sponsored the legislation in the Senate.

Sen. Birdwell told Breitbart Texas, “The will of the people of Texas is to protect their safety, and that’s what HB 11 will do.”

The Senator continued, “In the absence of federal action, the state of Texas has shouldered the burden of stopping human trafficking, the smuggling of illegal drugs and weapons, and the potential influence of dangerous criminals and terrorists. Gov. Abbott signing HB 11 today will provide the resources for our law enforcement community to protect our citizens by interdicting these activities.”

The Governor said he appreciated the leadership of those legislators and noted that the legislation received a “robust and strong response among both the Texas House and the Texas Senate.”

He also acknowledged the work that Sen. Donna Campbell (R-New Braunfels) had played in getting the bill passed through the Senate.

Sen. Campbell told Breitbart Texas, “I think by securing our border we encourage safe, legal, and orderly immigration and enforce our laws and protect the actual values of why people actually come to Texas.”

She added, “Texans demand no less than a protected border and our sovereignty depends on it.”

The Governor told those gathered that the almost $800 million in appropriations will give Texas the manpower, technology, training, and equipment needed to make sure the border is secured and our communities are safe. This includes appropriations that will allow the Department of Public Safety (DPS) to hire 250 more troopers.

The legislation “adds new elements and expands on old elements,” the Governor said.

One of the new elements is the creation of the Texas Transnational and Organized Crime Division at the Office of the Attorney General. The office will investigate and prosecute organized crime related to border security.

Texas Attorney General Ken Paxton was standing behind the Governor as the Governor made his remarks and signed the legislation. 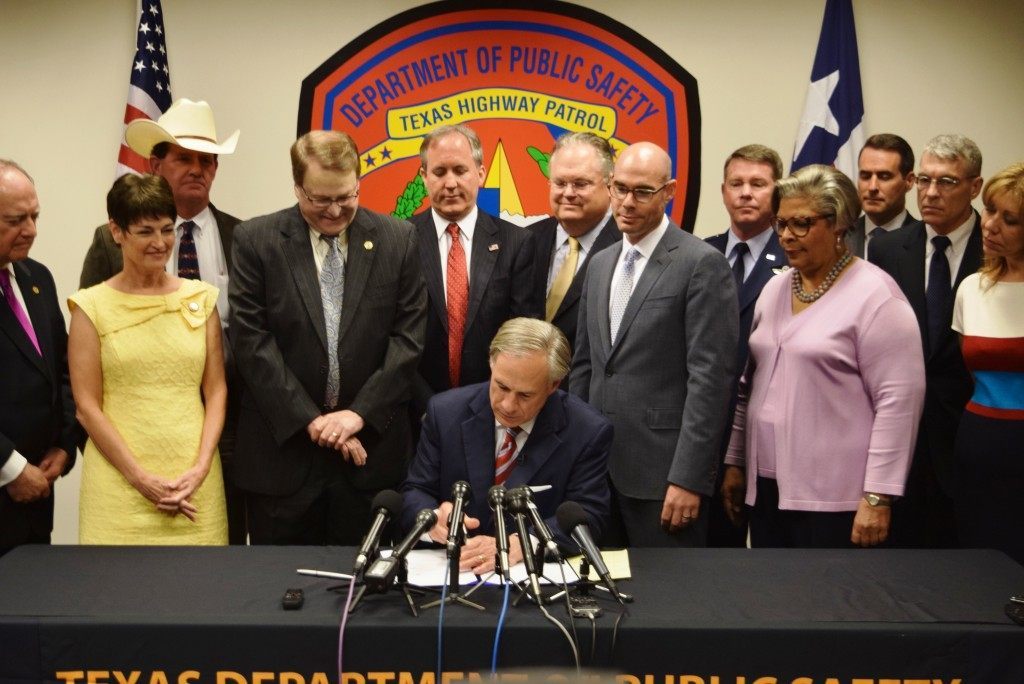 House Bill 10, authored by Rep. Senfronia Thompson (D-Houston) and sponsored in the Senate by Sen. Joan Huffman (R-Houston), “toughens and helps Texas crackdown even more on the horrific crime of human trafficking,” the Governor said.

Houston freeways also serve as the gateway for human traffickers to take their victims to other parts of the U.S.

House Bill 12 puts into law a border prosecution unit to help local law enforcement have the tools and resources they need to combat crimes on the border, according to Governor Abbott. House Representative Oscar Longoria (D-Mission) was the author of the bill, and Sen. Juan “Chuy” Hinojosa (D-McAllen) was the sponsor in the Texas Senate.

During the bill signing ceremony, Gov. Abbott also signed SCR 5. The legislation was authored by Sen. Craig L. Estes (R-Wichita Falls), and the House sponsor was Rep. Dan Flynn (R-Canton). SCR 5 authorizes the state to seek reimbursement from the U.S. Congress for almost $700 million that state taxpayers have had to spend to secure our border.

Rep. Flynn told Breitbart Texas, “It’s a great day to get an opportunity to send to the federal government a collection notice.”

In seeking this reimbursement, Gov. Abbott said, “Texas is willing to shoulder the responsibility, we expect the federal government to foot the bill.”

The Governor signed four bills while at the Department of Public Safety (DPS) Regional Headquarters in Houston Monday and he was flanked by state senators and representatives, law enforcement officers, Major General John F. Nichols, the Adjutant General of the Texas National Guard, and the President of the Sheriff’s Association of Texas, A.J. “Andy” Louderback from Jackson County.

Sheriff Louderback told Breitbart Texas, “Texas Sheriffs are here to help. We believe in what the Governor is doing, and want to be a partner. As Texas Sheriffs, we have been on the border doing the job for some time.”

The Governor ended the ceremony by saying, “Now together these laws establish a comprehensive border security plan that will keep our state and our communities a safer place.”

Abbott signed the bills into law and declared, “Texas is now a safer place.”