A Texas BBQ restaurant has made their transgender bathroom policy abundantly clear — “No Men Allowed in Women’s Bathroom.” A cross-dressing cowboy truck driver has been stirring-up trouble in the Texas BBQ joint. The trucker likes to come in dressed in a skirt or hot pants and a blouse and six-inch stilettos.

The sign in the small Texas town restaurant now politely warns, “No men allowed in the women’s bathroom please.” The restaurant shares the building with a Texaco service station.

BBQ on the Brazos (Ben Noey Jr./Fort Worth Star-Telegram/TNS via Getty Images)

The establishment in Cresson, Texas, was forced to put up the sign in response to the trucker who has come to the restaurant over the last two-and-a-half-years.

The North Texas town, population 761 according to a 2013 census report, is located about 20 miles southwest of Fort Worth.

John Sanford, the owner of BBQ on the Brazos told the Fort Worth Star-Telegram, “Before this gender thing got started, there’s a truck driver who comes in here who occasionally has on jeans and boots or occasionally has on a skirt and 6-inch stilettos.” 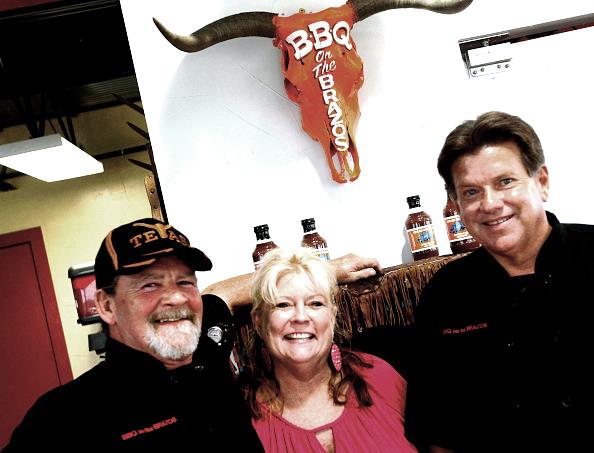 From left: Owners John and wife Kathryn Sanford and Michael Warren at BBQ on the Brazos in Cresson, Texas. (Ron Jenkins/Fort Worth Star-Telegram/TNS via Getty Images)

Sanford added, “He’s a pickup man for rodeos. The furthest thing from my mind was to see him in hot pants, a blouse and 6-inch heels.” Pick-up men help riders at a rodeo after they have been thrown.

He said he placed the sign on the women’s restroom after female employees and other females who frequent the restaurant asked him to.

“Everybody got together and said, we can’t have this guy going into the ladies’ restroom,” Sanford said. “I don’t care if he has on a dress or not.”

Sanford said the sign has nothing to do with President Obama’s new policy mandating that transgender students, or those who are identifying with a particular gender on a given day, use the restroom or shower facilities that they are more comfortable with. The sign has been on the door before “gender fluidity” became a big issue.

Sandford added if those who visit his restaurant to get some brisket think the sign was placed to protest Obama’s new policy, the 1,000 residents of the town would probably be just fine with that.

Governor Greg Abbott responded to the White House’s announcement saying that Texas will fight the policy. He tweeted, “Obama can’t rewrite the Civil Rights Act. He’s not a King.”