A Roswell, New Mexico man pleaded guilty in a federal court Wednesday to conspiracy and drug trafficking charges. The charges were part of a conspiracy that landed 41 people in jail for their roles in trafficking drugs in an area reported to be under the control of the Juarez drug cartel.

Drug trafficking in New Mexico and far west Texas has been reported to be under the control of the Juarez drug cartel according to a previous article by Breitbart Texas about a 2015 Drug Enforcement Agency Report on Areas of Influence of Major Mexican Transnational Criminal Organizations. 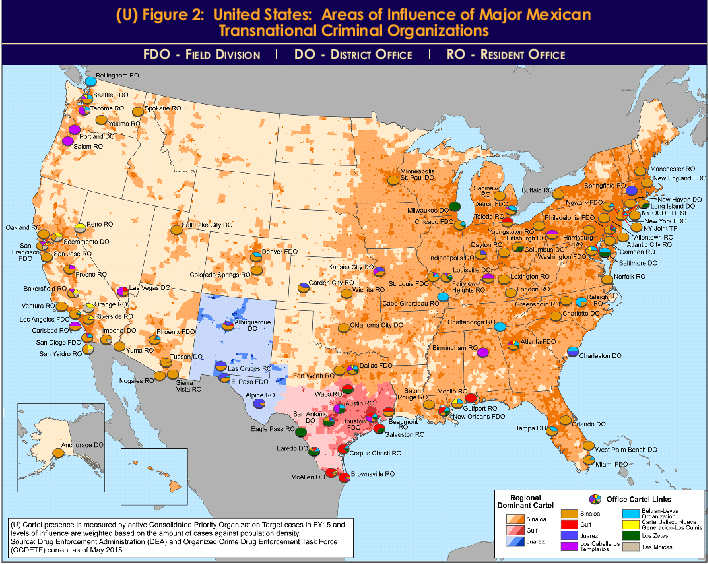 Areas of Cartel Influence in the U.S

Joseph Ray Mendiola, 35, pleaded guilty in a Las Cruces, New Mexico federal courtroom to trafficking cocaine and methamphetamine, according to information obtained from the U.S. Attorney for the District of New Mexico by Breitbart Texas. Mendiola was one of 41 individuals who faced federal and state charges for being part of a drug trafficking organization (DTO). He was arrested in 2015 following a 24-count indictment.

In the plea agreement obtained by Breitbart Texas (attached below), Mendiola admitted to possessing approximately seven pounds of methamphetamine with the intent to distribute the drugs. He also stated he had received the meth in Arizona and that he knew the purpose of his receiving the drugs was for distribution purposes. He further admitted to conspiring with other individuals to distribute the methamphetamine and that he used a telephone in furtherance of the crime of drug trafficking.

A criminal complaint (also attached below) detailed the events of Mendiola’s arrest and evidence obtained by searches of his vehicle and residence.

Federal officials working with state and local police agencies had been carrying out an investigation of a group referred to in the court documents as the Joseph Mendiola Drug Trafficking Organization. The investigation began with a tip from a source in February 2015, the criminal complaint stated. During a surveillance operation in July 2015, agents observed what they believed to be a drug trafficking transaction in Mendiola’s vehicle which was parked at a local Taco Bell. Agents initiated an arrest to stop the transaction when they were fired upon by a person in Mendiola’s car. That person was later identified as Jeremy Hatch, officials stated.

After detaining Mendiola, agents found him to be in possession of a large bundle of cash, most of which appeared to be $100 bills, the affidavit states. Mendiola had reportedly paid the driver of the other vehicle $5,000 for something “unspecified.”

Agents found two large bundles of cash in the second vehicle and two “large objects wrapped in aluminum foil,” they stated. The objects contained 900 grams of what would test positive as methamphetamine. After obtaining search warrants for Mendiola, the agents discovered $30,000 in the vehicle.

Having pleaded guilty to the charges in federal court, Mendiola now faces a sentencing hearing where he could be ordered to prison for between 10 years and up to the rest of his life. He could also be fined up to $10,000,000. He could also face an additional four years in prison and a fine of up to $500,000 on the count of using a telephone in commission of the conspiracy.

During the course of the investigation, authorities found a total of about 5,600 grams of methamphetamine and $35,960 in U.S. currency. They also found multiple firearms including two “assault rifles”, investigators stated.

Of the 41 co-defendants in this conspiracy, all but one have entered guilty pleas and are awaiting sentencing, the U.S. Attorney’s Office reported. The remaining co-conspirator has entered a not guilty plea.

The investigation was carried out by agents of the FBI, the Bureau of Alcohol, Tobacco, Firearms, and Explosives, the Roswell Police Department, and the Chaves County Shieriff’s Office. The agencies were working together under the High Intensity Drug Trafficking Areas task force.