The district, located in Vancouver, Washington, sent out the memo, which was addressed to “All School Bus Drivers.”

The memo, obtained by Breitbart News, was titled “Christmas Music with Students on Board.” It read, “Please refrain from playing Christmas music while students of any grade level are on your school bus.” 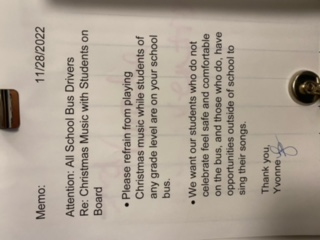 The memo, dated November 28th, 2022, went on to say, “We want our students who do not celebrate” to “feel safe and comfortable on the bus and those who do have opportunities outside of school to sing their songs.” The memo was signed “Yvonne” by Yvonne Gaylord, the district’s Transportation Director.

EPS told Breitbart News that the policy had been changed. Their statement read, “The guidance has already been amended and holiday music is among the music options that bus drivers can choose to play on their buses.”

Christmas is not the only holiday that public schools have discouraged students from celebrating. Breitbart News recently reported that the Los Angeles Unified School District created a lesson plan that denigrated Thanksgiving. The lesson included a video that claimed that the “true story of Thanksgiving” is that “after every killing of a whole village, these European settlers celebrated it and then called it Thanksgiving.”

It went on to say that those who celebrate Thanksgiving are “celebrating the deaths of many people” while the presentation suggested the “National Day of Mourning” as an alternative to the traditional holiday.