Actor-musician Jack Black is “alive and well,” his band Tenacious D wrote in a message on Sunday after a hacker reportedly gained access to the band’s Twitter account and posted a message claiming its frontman had died.

“WE had our Twitter account hacked,” the Tenacious D official Twitter account wrote in a message reassuring fans. “We can assure you that Jack is ALIVE and WELL and that this was a sick ‘prank.'”

WE had our Twitter account hacked. We can assure you that Jack is ALIVE and WELL and that this was a sick "prank".

Earlier Sunday, an as-yet-unidentified hacker reportedly gained control of the Tenacious D Twitter account and posted a series of messages claiming Black had died at 3:37 a.m., with the cause of death “yet unknown.” Music industry website Diffuser.fm captured the tweets before they were deleted. 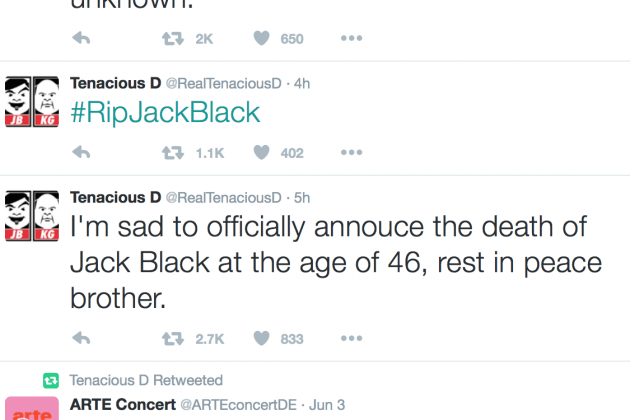 “I’m sad to officially announce the death of  Jack Black at the age of 46, rest in peace brother,” the hacker wrote.

According to the BBC, Black has previously been the victim of an Internet death hoax at least twice before: once in 2012, when it was claimed that he died after falling off a cliff in New Zealand, and another time in 2014 when it was claimed he had died of a stroke.

The Kung Fu Panda and School of Rock star has a a number of projects coming up, including a starring role in the upcoming Jumanji remake alongside Dwayne Johnson and Kevin Hart. Black is also attached to star in the upcoming comedy The Polka King.