Pop icon Madonna waded back into the political jet stream last weekend when, during the Women’s March on Washington protest rally, she told thousands of demonstrators that she has often thought of “blowing up the White House” following Donald Trump becoming the 45th President of the United States.

“Yes, I’m angry. Yes, I’m outraged. Yes, I have thought an awful lot about blowing up the White House, but I know that this won’t change anything,” the 58-year-old “Rebel Heart” singer said, to applause from the protesters.

The comment was so significant that the Secret Service reportedly launched an investigation into the singer following the march, and President Trump himself responded in his first cable news interview from the White House on Thursday.

But Saturday’s incident was hardly the first time Madonna has weighed in on the political events of the day.

Here are five more times the singer offered up her signature political wisdom for the rest of the world to contemplate.

[Warning: Some graphic language and otherwise disturbing content ahead.]

1. “If you vote for Hillary Clinton, I will give you a blowj*b.”

While serving as the opening act for Amy Schumer at Madison Square Garden in October, Madonna shocked the audience by offering to perform sexual favors for anyone voting for the former Democratic presidential candidate in the general election.

“If you vote for Hillary Clinton, I will give you a blowj*b. OK?” the singer said. “I’m really good. I’m not a douche, and I’m not a tool. I take my time, I have a lot of eye contact, and I do swallow.”

Of course, the legality (and practicality) of the offer was always somewhat in question. So it may not have been a complete surprise when New York Daily News writer Gersh Kuntzman was turned away from Madonna’s apartment by a security guard when he tried to claim his prize. 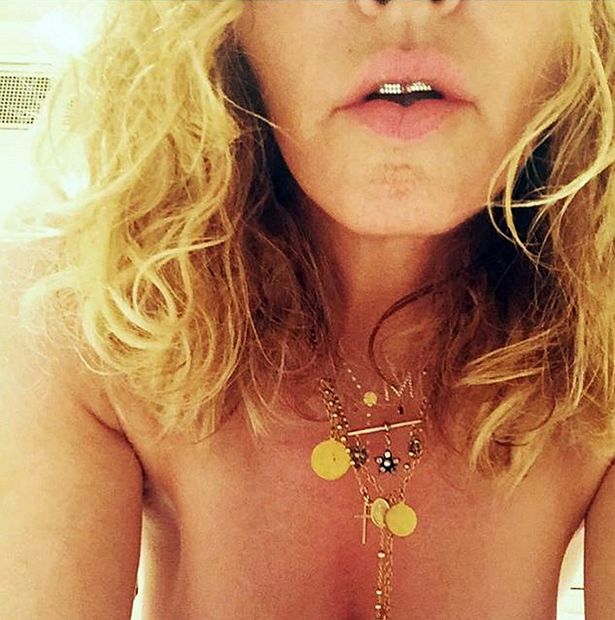 The Material Girl took a leaf out of fellow pop star Katy Perry’s book when she stripped down to show her support for Clinton in September.

“Im voting naked with Katy Perry!! Vote for Hillary. She’s the Best we got!” the singer captioned the risqué snap, which she posted to Twitter.

Hours earlier, the singer had posted another photo of herself straddling Clinton.

Living For Hilary! Yes I vote for intelligence. I vote for equal rights for women and all minorities. 🙏🏻😂🇺🇸🎈🙌🏻 pic.twitter.com/YxoFYm7HDL

In early November, with just days to go until Election Day, Madonna sounded a dire warning on her Instagram account in one last-ditch effort to get Clinton supporters to show up to the polls: “Vote Clinton or we are all f*cked.”

3. Madonna suggests the only way to defeat terrorists like ISIS is with “unconditional love.”

In November 2015, one day after a group of terrorists murdered more than 100 people in coordinated attacks throughout Paris, an emotional Madonna paused a concert in Stockholm to reflect on the state of the world, and to offer a suggestion for how to defeat the terrorists in the future.

The singer came under heavy fire on social media for the comments, but the editorial staff at GossipCop summed it up this way: “Does Madonna really think if we gave ISIS ‘love unconditionally’ they would no longer perpetrate horrific acts of violence? And can Madonna really ‘love unconditionally’ a group that beheads, throws over the sides of building, and stones to death men for being gay?”

4. Madonna makes the Pulse nightclub shooting in Orlando all about her.

After another terrorist attack, this time at the Pulse nightclub in Orlando in June, Madge took to Twitter to mourn the 49 victims of the attack, though not in a way some people found appropriate for the situation.

The singer posted two Tweets; one featured a gay couple touching tongues, and another was a photograph of herself kissing Britney Spears on the mouth during the 2003 MTV Video Music Awards.

Love is Love. Stop Hate Crimes. 🙏🏻 Any form of terrorism is a form of Hate! pic.twitter.com/jBMOudzNMM

Of course, it wasn’t long before the negative responses began rolling in. Madonna’s followers quickly accused her of using the tragedy in Orlando to bolster her own publicity and fame.

“Way to capatililze on the lgbtqa community with ‘bisexuality, I kissed a girl for momentary gain’ Katy perry bullsh*t. Over it,” read one typical response to the post.

“Inconsiderate and not the time for this,” another user wrote.

5. Madonna wears a sheer, butt-exposing outfit to the Met Ball gala to make a “political statement” about women’s rights. 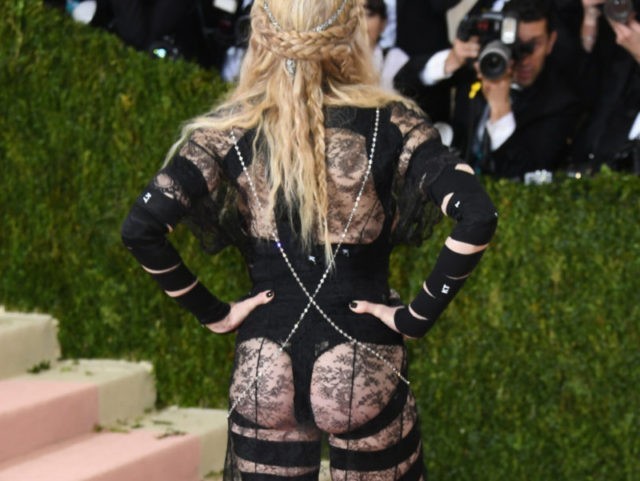 At the star-studded Met Ball gala in May, Madonna hit the red carpet in a sheer black Givenchy lace dress that showed off plenty of skin.

In a defiant post to her Instagram account to respond to critics, the singer said she had meant the outfit as a “political statement,” to show that Americans are still living in an “ageist” and “sexist” society.

“[W]e are still in the dark ages,” she wrote. “My dress at the Met Ball was a political statement as well as a fashion statement. The fact that people actually believe a woman is not allowed to express her sexuality and be adventurous past a certain age is proof that we still live in an age-ist and sexist society.”

“I have never thought in a limited way and I’m not going to start,” she added. “We cannot effect change unless we are willing to take risks By being fearless and By taking the road leas traveled by [sic]. Thats how we change history.”

It was not immediately clear whether history had changed due to Madonna’s choice of dress.