ABC late-night host Jimmy Kimmel claims that “genital herpes” can defeat President Donald Trump in the 2020 election, joking that the sexually transmitted disease has twelve-point lead on the president.

“I have some more bad news for the president,” said Jimmy Kimmel his opening monologue. “According to a new Washington Post, ABC News poll, all five of the top Democratic candidates are polling ahead of him.”

The left-wing TV funnyman added that in addition to candidates Joe Biden, Elizabeth Warren, Bernie Sanders, Pete Buttigieg and Kamala Harris, Kimmel allegedly polling ahead of the president, a few other entities also had a chance at winning the 2020 election, including “a tube of warm coleslaw” and “genital herpes.” 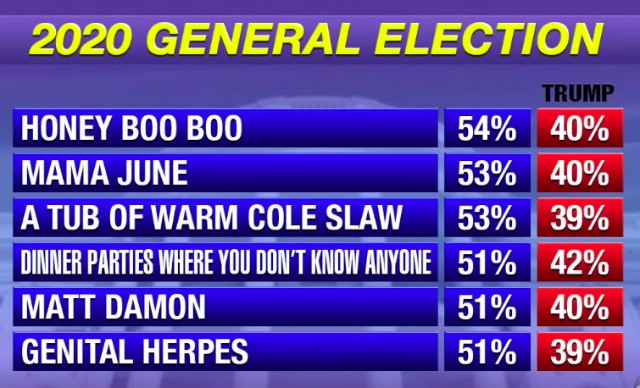 “But Trump isn’t worried, the last time he came in second it all worked out fine,” Kimmel eventually conceded of the apparent lack of accuracy when it comes to polling involving the president.

President Trump is not the only Republican Kimmel attacks on his show. The late-night ABC host had also recently gone after Senate Majority Leader Mitch McConnell, who he referred to as an “evil, soulless, old creep” as he demanded gun control over the mass shootings in Texas and Ohio over the summer.

“He needs to drag his boney, grey ass back into work to vote on these bills,” said Kimmel.

When it comes to the other side of the aisle, the TV host seems to have no qualms with defending former vice president Joe Biden’s son, Hunter Biden, who recently found himself encapsulated in a scandal involving his seat on the board of the Ukrainian gas company.

Rather than examine the issue further, Kimmel instead accused Trump and his associates of spreading “unproven nonsense.”