Mumford & Sons banjoist and guitarist Winston Marshall took to Twitter on Tuesday to apologize for praising journalist Andy Ngo and promoting his new book exposing the far-left movement known as Antifa. Marshall apologized to those he “offended.”

“Over the past few days I have come to better understand the pain caused by the book I endorsed,” Winston Marshall wrote in a statement posted to Twitter. “I have offended not only a lot of people I don’t know, but also those closest to me, including my bandmates and for that I am truly sorry. As a result of my actions I am taking time away from the band to examine my blindspots.”

“For now, please know that I realise how my endorsements have the potential to be viewed as approvals of hateful, divisive behaviour. I apologise, as this was not at all my intention,” the guitarist added.

On Saturday, Marshall had fallen under fire by leftists on social media after tweeting, “Congratulations @MrAndyNgo. Finally had the time to read your important book. You’re a brave man,” alongside an image of Ngo’s new book, Unmasked: Inside Antifa’s Radical Plan to Destroy Democracy. 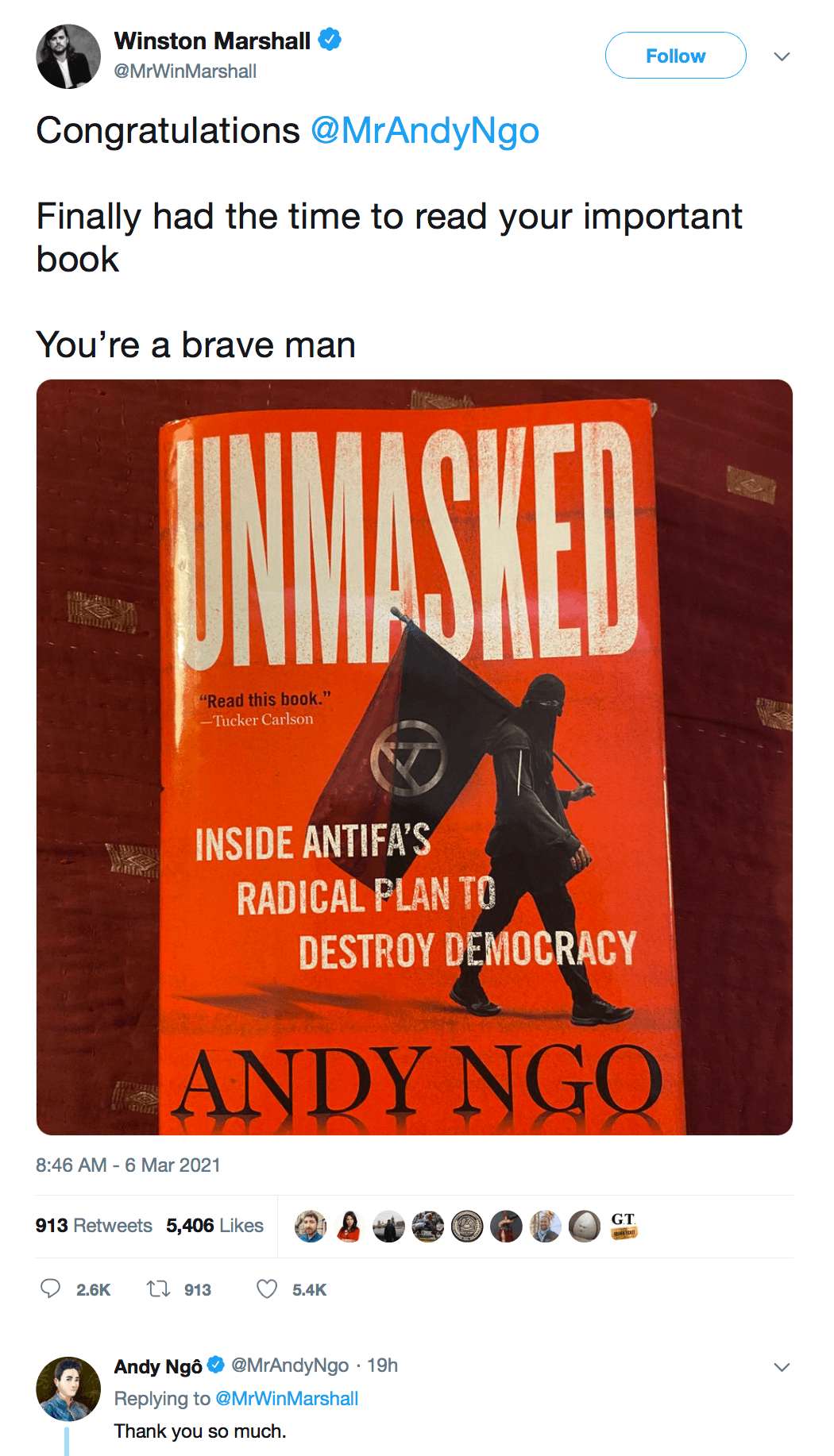 Ngo’s book was released last month, and is about the far-left movement known as Antifa, whose members assaulted the journalist in Portland in 2019.

Ngo seemed to address the fallout from Marshall praising his work, though Ngo didn’t mention the rocker’s name in his Twitter post.

“I grieve for those who are made to suffer because they dare to read my work, or talk to me,” Ngo wrote. “The danger of Antifa & their allies is not only their willingness to carry out or support maiming, killing & terrorism—but also how they close curious minds from independent thought.

I grieve for those who are made to suffer because they dare to read my work, or talk to me.

The danger of Antifa & their allies is not only their willingness to carry out or support maiming, killing & terrorism—but also how they close curious minds from independent thought.

Antifa and its many factions in the U.S. have long been suspected of several acts of violence from arson to attacks on law enforcement and rioting from Portland to New York. Moreover, a recent Harvard-Harris poll found that 71 percent of the 1,778 registered voters surveyed agreed that ANTIFA is a “domestic terrorist group.”

After facing backlash from leftists, Marshall deleted his tweet without offering any further explanation. But the scrutiny continued on social media.