It’s a perverse modern truism that Social Justice Warriors (SJWs) are only truly happy when they’re unhappy – and, should sweet misery elude them, they pathologically hunt it down.

You see it everywhere and every day. Never, in the field of human endeavor, has so much energy been wasted by so many, on so little.

For the last 13 days, the social justice jackals posing as do-gooders have descended on Protein World, a hitherto unknown British sports nutrition company, after campaigners vandalized and attempted to ban the now-infamous “are you beach body ready?” posters on the London Underground.

But not only did the SJWs spectacularly fail in the pursuit of their prey, they have catapulted the brand to priceless infamy. First, a 55,000-strong Change.org petition to remove the posters failed. The heat was turned up.

Last Saturday, I broke the Protein World story on Breitbart London that SJWs were posting the company’s address and urging “direct action” in the form of vandalism and threats of arson. On Wednesday, a bomb threat followed.

Interest in the brand rocketed, and next the Protein World ad creative was directly assimilated by market-leaders. First, beer Goliaths Carlsberg released their “Are you beer body ready?” ad, placed directly alongside Protein World’s sites on the Tube for maximum impact. Next came feminine grooming giant Dove, whose replication of the ads but with three plus-size models sealed its place in modern advertising folklore.

Yesterday, when the Daily Mail ran the obligatory exposee on the company’s CEO Arjun Seth and Global Head of Marketing Richard Staveley, their elevation to pantomime baddies was sealed. In that article, the company claimed 30,000 extra customers and revenues of £2 million since the campaign began – figures repeated by Richard Staveley to me.

Today, a protest march against Protein World is planned in Hyde Park to “reclaim the beach,” although the company’s posters are already being taken down, not due to a successful Advertising standards Agency banning order, as has been erroneously reported elsewhere, but purely because the company’s contract with Transport For London has expired.

Protein World has gone from minnows to multi-million mega brand in a fortnight. And let us remember: none of this would have happened without the SJWs’ fury. Not only have their protests spectacularly backfired, they’ve made the company’s owners rich and famous. And that has made the SJWs angier than ever.

Yet there’s more. Protein World is next taking their ads to New York in an identical format save for one salient point: they will twist the knife in their protestors’ guts by incorporating the hashtag #growupharriet on their US billboards.

For the uninitiated, this was a hashtag aimed at a protestor called Harriet Johnson who Arjun and Richard mercilessly taunted on Twitter during the heat of the British protest against the campaign. When Harriet tweeted Protein World “am I (a normal woman) allowed on the beach?” they posted a compilation of eight fitness and celebrity magazine covers with near-identical images to their own with advert, with the comment #growupharriet. 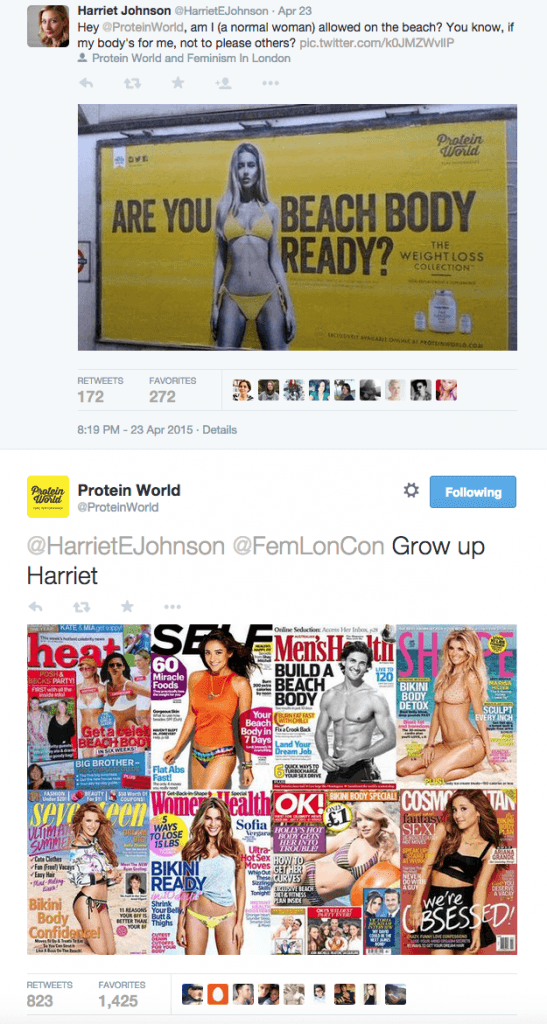 That hashtag was then rapidly appropriated by the brand’s defenders and used as a weapon to attack other SJWs. Now that takedown will be utilized in the ads, creating a ready-made platform to ridicule the next wave of New York SJWs.

Quite simply, it’s been the greatest utilization of and triumph over SJWs in advertising history. But where does all of this leave the protestors? And what happens next when Protein World hits New York – and other brands cotton on to the fact that harnessing SJW rage can make them rich?

In a modern version of the uneducated child drinking directly from a scolding teapot, SJWs seek pleasure where there is certain pain. They actively follow and relentlessly pursue people or causes they utterly despise, purely to reinforce their own sense of righteousness and satiate their insatiable thirst for hate. But how far are they prepared to go? It is my belief that, as every true cause needs its martyrs, we will soon see an SJW’s addiction leading to a loss of life.

After all, SJWs have literally been putting their lives at risk in the last 13 days by clambering over live rail tracks in some of the world’s busiest train stations while defacing Protein World posters on the London Underground. Who would have been surprised if an SJW was found under a train, a selfie stick clasped in their death claw?

Last year, I spent three intense months watching how British jihadists utilized social media (recruiting, fundraising, propagandizing) in a series of exhaustive investigations for The Sun newspaper. Here, it strikes me that selling a Protein World weight loss drink to a radical feminist is like attempting to sell the concept of a fair USA to an Islamic State jihadist.

Having written on the theory that trolling is addictive by interviewing two of Britain’s most notorious trolls – one of whom, @holborlolz was exposed by the Daily Mail as “Britain’s vilest troll” –the crucial point that emerged is that no troll thinks they are a troll. Everybody else who doesn’t agree with them; they are stupid, they are wrong – they are the troll.

Jihadists, trolls and SJWs all share the absolute and unshakable conviction they are right. They think: “We are behind the righteous cause: how can we be wrong?”

It’s the same worldview that has driven hatred and legitimised cruelty since time immemorial. The Islamic State think they’re doing the “right” thing. So did the Nazis. And so do today’s SJWs – but is their calling worth dying for, too?

I caught up with Protein World’s Richard Staveley, as he enjoyed a pint of Guinness and a round of golf on the eve of his wedding (which is today). In a clearly exuberant mood, he’s loving all the attention – and money – the SJWs have given him and his company.

“We couldn’t have dreamed of this level of exposure,” he says. “We’ve had a lot of threats on the company itself. There’s been so much fuss made, but where it leads to is still with the jury.

“It’s been fantastic for business, no doubt, but whether or not people are going to walk away from it we don’t know. This is political correctness and feminism gone crazy. Are they going to say, ‘we’ve lost this one, but they’re still a bunch of arseholes on Protein World, let’s go after them?’ – I don’t know.

“These people were extremists. In my opinion, climbing over live rail tracks to deface a poster is extreme behaviour.

“I was on the Jeremy Vine show with Rhiannon Lucy Cosslett from the Guardian, and as we left we bumped into the Prime Minister – who was on after us. We were bigger news than the Prime Minister in the run up to a General Election, and all thanks to the protestors.

“Rhiannon waited around to scream at the Prime Minister “you’re a disgrace!” These people, they’re not happy. All this bullshit – they’re just not happy people. They’re totally delusional, they’re irate. They’re not happy unless they’re unhappy. It’s just bonkers.

“The Hyde Park march is going ahead but if it’s anything less than a glorified picnic I’ll be amazed. On Facebook there are about 400 people committed to going, which probably means about 100-200 will turn up and most of them will bugger off as soon as they’re bored.

“But because they’ve created such a song and dace there’ll probably be quite a lot of journos, so it will be wonderful for us.

“I can tell you this: if I wasn’t getting married tomorrow and if Arjun wasn’t going to Vegas for the Mayweather fight we’d both be there having an absolute bloody riot. We’d be protesting against the protest. I’d be enjoying and absorbing it all.”

When those being protested against are enjoying the protests, what happens next? How will the wounded SJWs regroup? By ratcheting up the hate against their next target? By going a stage further against Protein World either here or in New York? Or has the impotent fury of the SJWs finally been called for the bluff it is?

Or is somebody out there prepared to pay the ultimate price – and, in pursuit of immortal notoriety, die for the SJW’s cause?